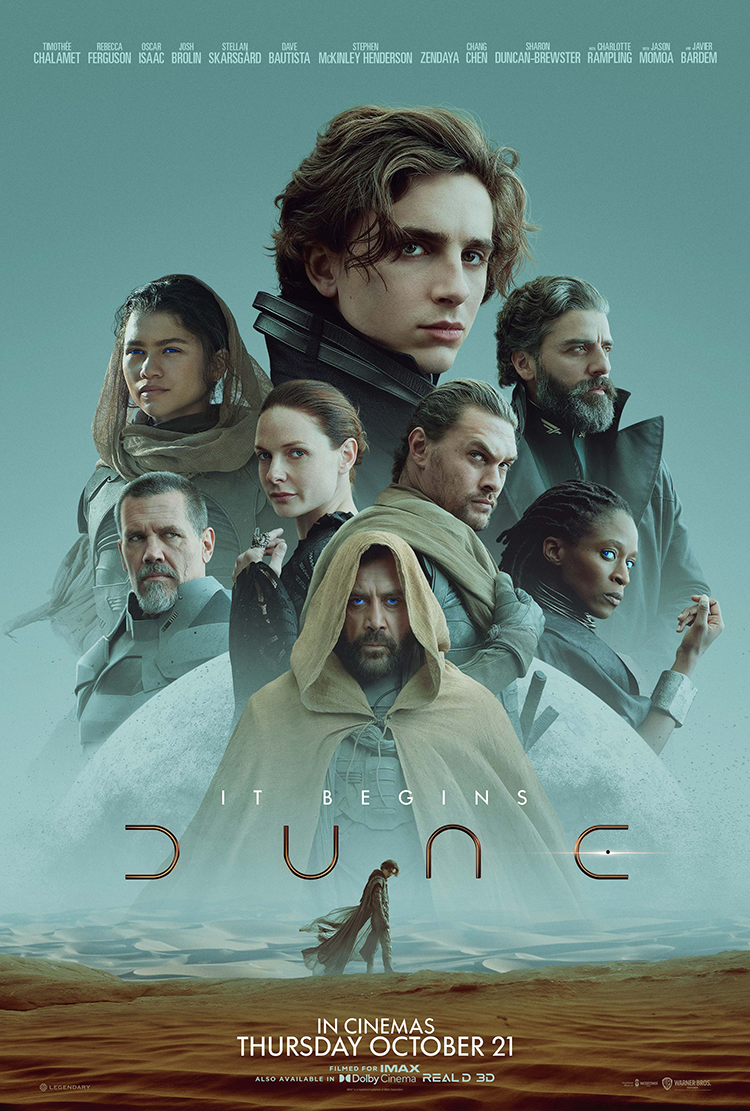 Francis Ford Coppola’s Vietnan war epic stars Martin Sheen as a soldier on a risky mission into the heart of darkness.

Frank Herbert’s seminal science fiction novel Dune (published in 1965) was previously adapted for the big screen by David Lynch in 1984. It was famously disowned by the cult filmmaker due to studio interference. Alejandro Jodorowsky also attempted to tackle the behemoth tome in the 1970s and failed; the reasons for its demise can be seen in 2013 documentary Jodorowsky’s Dune. And so, in 2017, this notoriously difficult-to-make film was placed in the hands of Canadian director Denis Villeneuve whose eye for large-scale, smart sci-fi can be seen in Bladerunner 2049 and Arrival.

Villeneuve’s intention is to make two films, and though nothing has been officially green-lit to date, the opening title card states that this enthralling epic is ‘Part One’. What follows in the 155 minutes runtime finishes at about the half-way point of the novel, with a character teasingly stating: “This is only the beginning.” Whether that will annoy, excite or frustrate is in the eye of the beholder.

For those not familiar with the book it follows Paul Atreides (Timothée Chalamet) as he comes of age as successor to his father Duke Leto Atreides’ (Oscar Isaac) fiefdom and the inherited powers of his mother Lady Jessica Atreides (Rebecca Ferguson) who hails from religious order, Bene Gesserit. They are tasked with reigning over the barren, sandy dunes of Arrakis – a desert planet which was mercilessly colonised and mined for a precious material (the spice melange) that allows interstellar travel, by the Harkonnen (Dave Bautista giving off scary vibes as the leader of a menacing army and Stellan Skarsgård going full Marlon Brando in The Island of Dr Moreau as a power-hungry baron lurking in the shadows). The indigenous population, the Fremen (Zendaya and Javier Bardem among others), bear the vicious brunt of their planet’s hugely sought-after ‘spice’.

The ensemble cast all do fantastic work with what they’re given, and there are some genius moves in terms of the actors chosen by the casting directors. Sharon Duncan-Brewster takes on the role of the originally male ecologist Liet Kynes. She imbues her performance, as a courageous expert in her field, with a commanding authority as she slides down dunes and confronts strangely beautiful sand worms – a combination of phallic and vaginal shaped monsters. Charlotte Rampling is entirely terrifying as a Reverend Mother dressed in a black beaded face veil (the costume design is exquisite across the board) and threatening young Chalamet with all the vigour of an otherworldly dominatrix. “What’s in the box?” asks Paul, in a splendidly judged page to screen scene. “Pain,” growls a regal Rampling.

Chalamet plays Paul with both the fury of a teen discovering harsh realities, and the tenderness of a wise old sage. Chalamet’s scenes with Jason Momoa, as trusted guardsman Duncan Idaho offer some lightness to all the dramatic tension and the two bounce off one another like old friends. Meanwhile, his scenes with Ferguson, are laced with turmoil, as the mother and son bond is tested. The film focuses on how these two navigate a hostile environment, with the rest of the cast popping up for brutal sword fights, meticulously crafted action sequences, ghastly death scenes and treacherous scheming. It’s like Game of Thrones in space – minus all the sex.

The worldbuilding is majestic as is the score by Hans Zimmer. The music works beautifully alongside awe-inspiring visuals of Arrakis (Liwa desert in Abu Dhabi); distorted bagpipes sound to the House of Atreides marching along like a fascist regime, and in moments of devastating destruction Zimmer ignites a loud creaking effect that makes the room shudder. Tension is often created through unnerving choral whispers, as characters take flight and in some of the most intense scenes, the sound dips in and out, to stomach-churning effect.

Helicopters with the wings of dragonflies’ swoop in to view, with the sound of the loud whirring blades recalling scenes from Apocalypse Now. The burning palms planted and watered in the arid citadel of Arrakis (which bears a resemblance to the ancient ruins of Machu Picchu) and the hallucinogenic effect of the spice on Paul also displays similarities to the aforementioned film.

Villeneuve makes people and objects look like ghostly, floating chess pieces – each playing their part in a violent game of tactics with no thought for human suffering. Paul’s visions fade in and out in dreamy fashion, effectively bringing his unconscious mind to life with melancholic flair. Every set piece is shot through with a powerfully haunting quality that makes the film’s themes of conflict, power and wealth linger long after the final credits roll.

Dune is available on digital download now and 4K UHD, Blu-Ray, DVD and VOD on 31 January.