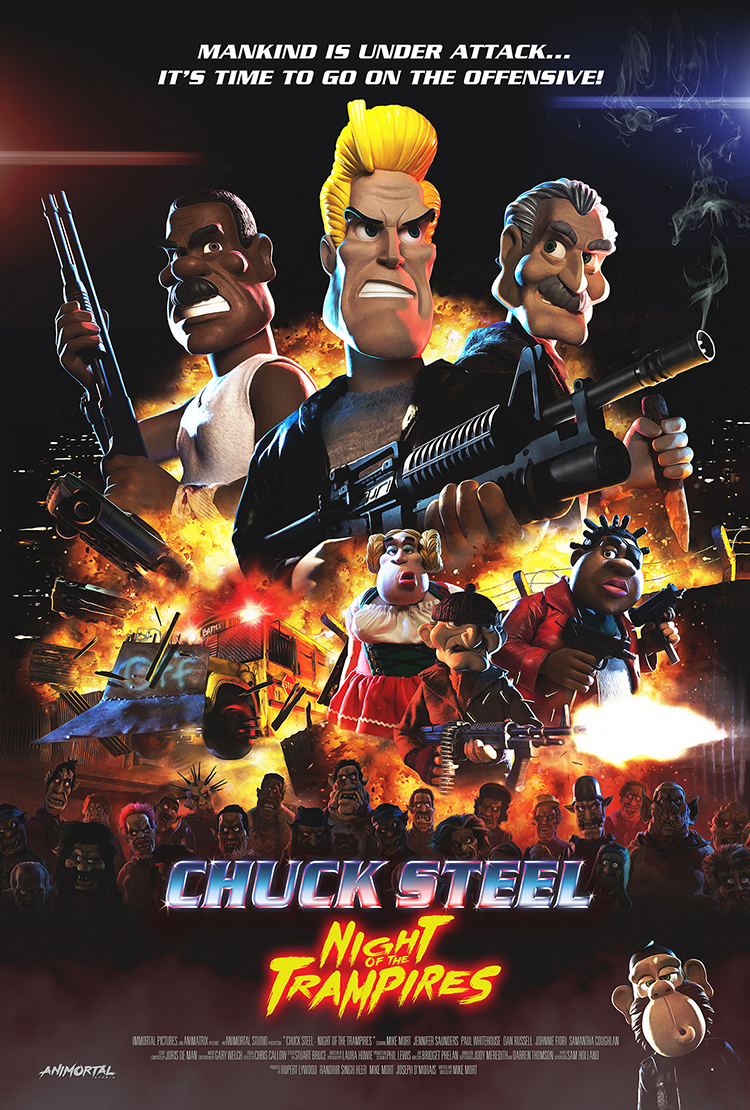 Question: how long do you keep at something before you decide that, maybe, it’s time to give up? Six months? A year? Five years? If you’re Mike Mort, creator of Chuck Steel, the answer is that you don’t give up.

Mort came up with the character when he was 15 (you can tell…) and spent the following 35 years chasing his dream of being able to bring Chuck Steel to the world on the big screen.

Now that dream has become a reality in the shape of this stop-motion picture experience that is more hard man than Aardman. Was it 35 years well spent? Well…

Chuck Steel: Night of the Trampires, to give it its full, ridiculous title, is a pastiche of everything that made Eighties action flicks so bad and good in equal measure. It’s 1986 and Trampires (vampire tramps that hunger for the alcohol-rich blood of the seriously sozzled) are roaming the streets. It’s up to maverick cop Chuck Steel to stop them and their leader before they bring about the apocalypse, and he’s aided in his action-packed quest by monster hunter Abraham Van Rental (uh-huh…).

Chuck Steel is absolutely jam-packed with insanely OTT action sequences, explosions and car chases, all of which are even more impressive in miniature stop-motion scale. It’s all accompanied by a pounding rock soundtrack and finished off with a generous sprinkling of ridiculous one-liners. It’s outrageously gory, absurdly violent, unashamedly un-PC and proud of it. Its intentions and Mort’s teenage vision are easy to appreciate, but the finished product just doesn’t quite hit the mark.

It’s fun to a degree, but it’s also relentless. It’s a noisy, non-stop stop-motion assault on your senses. It feels like it’s so focused on squeezing in every action movie cliché imaginable that the actual film itself plays second fiddle to all that. The one-liners, jokes and visual gags come thick and fast, but none really hit the mark, and while the concept of the film sounds like it should be an absolute winner, there’s something missing. A school bus full of tooled-up tramps fighting vampires in a circus big top in the movie’s WTF finale sounds like the most hilarious and ridiculously amazing thing ever, but it doesn’t quite land.

We have nothing but respect for Mike Mort’s sheer, dogged determination to bring his boyhood creation to life. The years spent animating the incredibly intricate action sequences, the attention to detail, the 425 puppets created by Animortal Studio, the dozens of incredible sets: it’s mind-blowing.

Also, not only is Mike Mort the writer and director, but he’s also a damn good voice actor. He plays four of the characters, including Chuck Steel himself, along with his permanently angry chief, Jack Schitt (yup…). That meant there was enough left in the kitty to get national treasures Jennifer Saunders and Paul Whitehouse on board, which also helps to bolster the film to some degree.

Chuck Steel is a lovingly hand-crafted homage to Eighties action films, and while it didn’t hit the spot for us, we totally understand its appeal. If everything we’ve just described sounds like your dream movie, you’ll have a blast.

Chuck Steel: Night of the Trampires is out in cinemas on 29 October

Prisoners Of The Ghostland review: Please release me
< Previous
Next >