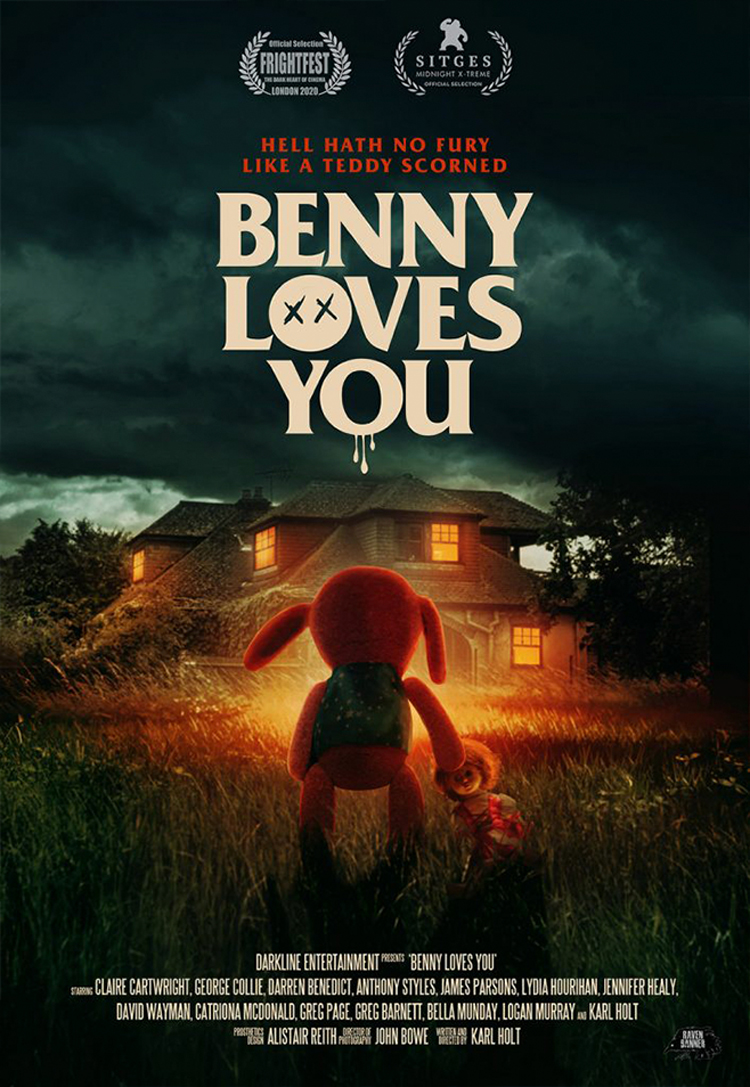 Like a good cup of tea, comedy horror is that most special of genre blends; a delicate balance must be struck to create a satisfying experience. So it’s a real delight when a film like Benny Loves You successfully lands that elusive one-two punch of shocking horror and laugh-out-loud comedy with such warranted conviction.

Telling the story of the toxic relationship between a man-child and his overly possessive (or is that possessed?) teddy bear, Benny Loves You sees Jack (played by writer/director Karl Holt) living at home with his parents in a state of arrested development. After witnessing their gruesome demise at his 35th birthday party (we’ll never feel safe around a cheese and pineapple hedgehog again!), Jack must finally learn to stand on his own two feet, put away childish things and become a man.

With his career as a toy designer already on the rocks, Jack soon struggles with his acceleration into adulthood and it doesn’t take long before the debt collectors come a-calling to repossess his childhood home. Unfortunately, seeking comfort in his adorably cute stuffed bear, Benny, doesn’t make things any easier for Jack as Benny soon reveals himself to be a jealous and psychotic teddy with a talent for grizzly murder.

An ambitious and smartly executed first feature, Holt shows an enviable ear for tone, setting Benny up as a loveable rascal while he ruthlessly despatches anyone who would seek to hurt Jack. Yet as the kills become more inventive and gory, they are consistently delivered with enough horror beats to warrant the cathartic comedy that follows.

A brilliantly British bastardisation of Fatal Attraction by way of Small Soldiers, Benny Loves You can’t resist being childish in and of itself, referencing Hollywood classics and slasher favourites in abundance, without ever losing its own affable identity. Balancing writing, directing, producing and special effects it becomes all the more impressive to see Holt portray Jack as an affable loser rather than a petulant brat.

Comedy horror is a subgenre that is notoriously oversaturated with misjudged vanity projects and like many festival favourites, Benny Loves You is clearly a labour of love. Happily, however, after five years of debt and development for Holt, what has emerged is a unique and entertainingly maelstrom of mayhem.

Benny Loves You is out now from Darkline Entertainment. Read our interview with Karl Holt here.