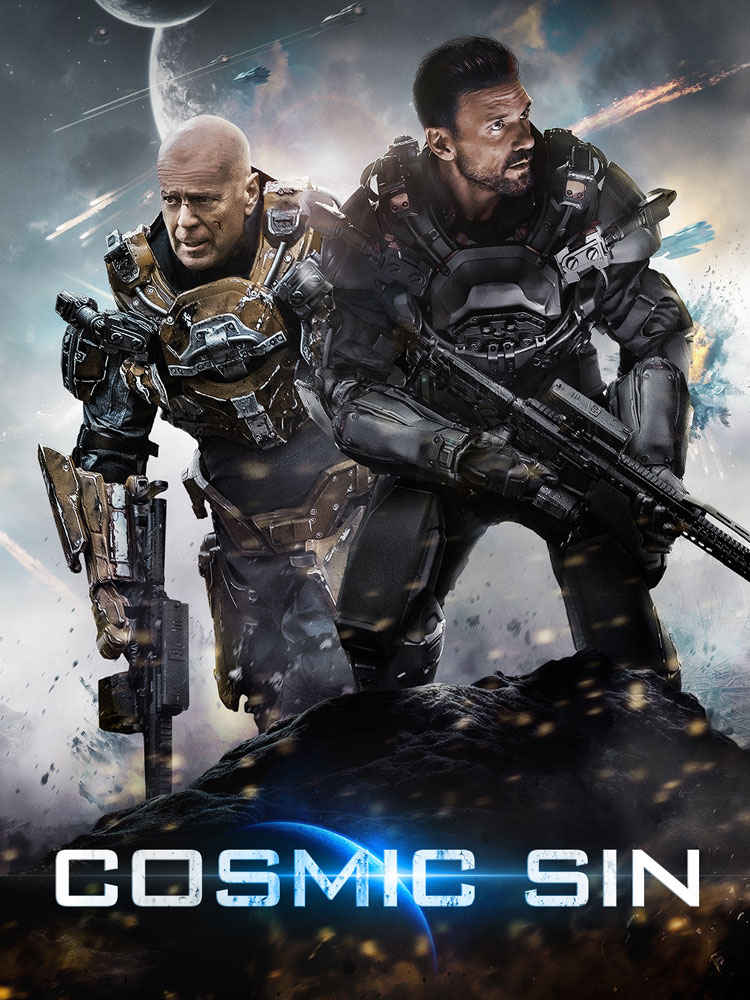 Set in 2524 (500 years after the human race began colonising Mars and other outer planets), Cosmic Sin sees the human race reeling from an attack by an alien race after first contact is made. In an attempt to prevent intergalactic war, retired military general, James Ford (Bruce Willis) is reinstated, where he teams up with General Eron Ryle (Frank Grillo) and a squad of soldiers to see if peace can be made.

From the off, Cosmic Sin gives us a few questionable moments in the story, such as the military allowing the attacked (and clearly somehow infected) soldiers to just stroll back into their army base without much of a concern. At this point, alarm bells should most certainly be ringing – not just for the fate of the unfortunate soldiers, but for the unfortunate audience members as to where things are heading…

Bewildering plot points aside, the film’s two leads feel underused and lacking. James Ford is a bewildering character (and played half-heartedly by Willis), jumping between two extremes with lacklustre. He’s either a rocket launching-wielding badass with a troubled past or an unconvincingly thoughtful soul that “just wants someone to look at the stars with…”

Then we have Grillo’s General Eron Ryle, who in a totally mystifying turn has hardly anything to offer in his role. Though the plot initially seems to revolve around him as the officer calling all the shots (and being the top-billed star on the poster alongside Willis), he is bizarrely on screen for less than half the runtime and is then left to float in space for the main chunk of the movie until the finale.

The more interesting aspects of the plot come from the psychological elements surrounding the aliens’ motivations, but this just feels like an afterthought and are put aside in favour of painfully cliche dialogue and unconvincing action sequences.

Despite not having much to work with, you have to offer some credit to the younger members of this ensemble cast, with standouts Braxton (Brandon Thomas Lee), Fiona (Adelaide Kane), and Sol (WWE’s ‘Lana’ – CJ Perry) who offer some much-needed freshness to a stale backdrop.

Cosmic Sin works well enough as a low budget sci-fi action, but it’s hard to avoid the sad reality that having a sub-par Willis involved, who’s attached to some of the best that the genre has to offer, leaves us with nothing new or bold enough to elevate itself from being anywhere near as watchable as its peers.

Cosmic Sin is available on digital and DVD from 1 March. Win a copy of Cosmic Sin with our competition here.