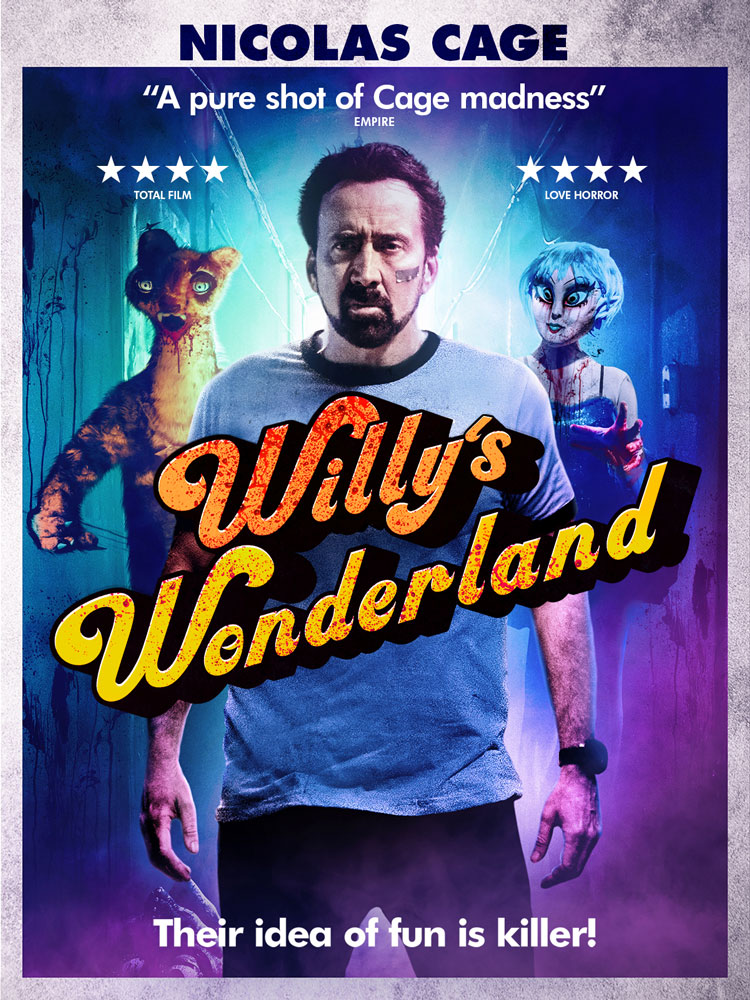 You may have heard of a series of horror games called Five Nights At Freddy’s; an extremely popular franchise that sees the player take on the role of an employee at an old children’s restaurant chain, filled with animatronic animals that turn homicidal when the sun sets and you have to try to survive over a series of nights. Willy’s Wonderland also features murderous animatronic animals out for blood after dark but the biggest difference between the two is that instead of the protagonist being a helpless member of the night staff, the main character is Nic Cage playing, well, at this point it feels like he’s just playing Nic Cage, and that’s no bad thing.

Stranded in the middle of nowhere with four flat tyres (an accident? We think not…) and short the $1000 in cash demanded by the local garage to fix his car, he’s offered a deal by local businessman Tex Macadoo (Ric Reitz) – spend the night cleaning up Willy’s Wonderland, a run-down old themed kids’ restaurant, and he’ll have his car fixed for free. Nic accepts and what follows is quite possibly the dumbest 89 minutes of cinema we’ve ever seen as he attempts to survive the night locked in the abandoned eatery with the murderous robots, and we loved every single second of it.

Such is the power of Nic Cage that his character doesn’t need a name (he’s simply called The Janitor) nor even a single line of dialogue but that’s not a problem, as this movie’s actions speak far, far louder than any words ever could – if you’ve ever wanted to see Nicolas Cage beat an animatronic ostrich to death with a broom, this movie has got you. In fact, reading that sentence will instantly let you know if Willy’s Wonderland is for you. It ticks off horror tropes like they’re going out of fashion and delivers yokels, a town harbouring a dark secret and dumb horny teens along with some truly majestic moments, such as a sped-up sequence of Nic cleaning a public toilet. This is a movie that truly has it all.

There are no scares to speak of but there is a glorious amount of blood that is liberally sprayed across the scenery at any given opportunity; the violence is ramped up to comically overblown proportions and it’s just one small part of this film’s many ample charms. Throw in some cheesy dialogue, Cage’s godlike cleaning prowess and his slightly unhealthy obsession with an old pinball machine and you’ve got a movie that knows exactly what it’s doing. Willy’s Wonderland never takes itself seriously, even for a second, has just enough momentum to make sure it doesn’t run out of steam before the credits roll and reaps all the rewards as a result.

Willy’s Wonderland is best enjoyed on the surface – don’t dwell on it, don’t think about any potential plot holes, just let its sheer stupidity wash over you and drink it all in. It’s brain-dead, brutal and there wasn’t a single moment where we weren’t grinning like idiots or laughing out loud.

Willy’s Wonderland is out now on digital, DVD and Blu-ray from Signature Entertainment.