Conspiracy theorists have long hypothesized that the moon is hollow. While science rejects this as a possibility, Roland Emmerich makes it a reality in Moonfall.  “It’s a space movie,” Emmerich says. “It began when I read a book called ‘Who Built The Moon?’. It just made me start thinking, whenever I looked at the moon, how can this ever be built…?”

In fact, the film starts in space as Jocinda Fowler (Halle Berry) and Brian Harper (Patrick Wilson) are on a mission that goes haywire. Though a serious scene, Wilson’s musical number cannot be overlooked here as it sets the tone for a lot of the humour in the movie (you can watch it in our clip here). As a professional singer, he had to purposefully downgrade his talent by belting out Africa by Toto… questionably. (For the record, if you find yourself at karaoke with Wilson, he will go all out: “What, am I supposed to suck just because you’re not good? That’s not fair!”)

With films like Independence Day and 2012 under his belt, Emmerich’s films undoubtedly offer escapism through their ambitious landscapes and special effects. Equally, however, he makes sure to devote time to character development and Moonfall is no different. The fallout from the disastrous mission has left Brian struggling to find his place in the world, while in contrast, Jocinda, has risen within the ranks at NASA. Meanwhile, K.C. Houseman (John Bradley) is trying to convince anyone that the moon is a man-made megastructure – and he’s not really being listened to. But all that might be about to change…

Emmerich reveals that he grappled with the concept of action vs character early in his career. “When I came to America, I was confronted with, ‘are you a production designer or director?’. I had the good fortune of working with Dean Devlin, a great storyteller, and now with [Moonfall writer] Harald Kloser. That kind of made me aware that there’s a certain part where characters are important and there are certain parts where excitement has to be delivered.”

As with many productions, the pandemic impacted Moonfall’s schedule and for Emmerich this was a huge creative hurdle. The shooting timeline was reduced to 61 days, instead of the original 70. The huge scope of this film, with multiple splinter units, both directed by Emmerich, meant this was “super tough”.

Berry adds that restrictions also made it difficult to connect to the other actors. “We were very isolated from one another, that was a challenge,” she says. But ultimately, she reflects that “being able to shoot a film in the height of COVID when so many people were losing their jobs and productions were being shut down… I am grateful that we actually got to work.”

Wilson’s process was equally affected by the pandemic, as many of his research plans were no longer possible, such as zero gravity simulations and visiting NASA to experience life as an astronaut before filming. Instead, he “relied on meetings with astronauts… then just watching videos that they showed us. They gave us access to the International Space Station – so just watching how everyone moves, the things that you have to do in close quarters,” he recalls.

Bjarni Tryggvason, a retired astronaut, was another invaluable resource for the cast to ensure their performances were convincing. “We shot in Montreal and he came to set and helped out and answered questions,” Wilson continues. For the actor, getting that authenticity correct was “the most important part” and he acknowledges that even if viewers don’t ever see the lengths actors go to behind the scenes in their research “you want to make it look like this is not your first time [in space].”

Luckily, Berry completed “gravity flights” while working on Extant that she could “carry over into this role.”

Bradley, on the other hand, could act like he was clueless because while K.C. certainly had the physics down (he is, after all, a self-proclaimed megastructure expert), he has no idea how to operate a spacecraft. “It’s been an advantage my entire career that I keep getting characters that are just absolutely terrible at everything,” he laughs. “I remember on Game of Thrones, I’d see Kit Harrington and the Night’s Watch leaving the hotel to go to do their combat training and I’d be like, ‘see you later!’”

That’s not to say Bradley should sell himself short, as while his character lacks the technical expertise in space, K.C. is certainly not lacking in terms of depths. “I read the Moonfall script, and I thought: ‘I can play every single colour of my emotional palette – there is humor, but there’s also heartbreak and furious anger and frustration and tender moments and heroic moments.”

After nearly a decade on Game of Thrones as Samwell, who is “understated and had a lot of self-doubt”, Bradley could experiment with a more dynamic character: “K.C’s got such unbelievable self-belief,” he explains. “[I’m] getting to play somebody with the confidence to go into a room and say to people, ‘you listen to me’. It’s the energy of the performance, the size of it, and also the confidence. Those are things that I’ve never really got to play before.”

Though the movie’s comedy (especially between Brian and K.C.) lighten the mood of the film, Bradley emphasis that “it doesn’t detract from the drama”. In fact, “it can always add to the drama if it’s used in the right way,” he says.

Away from the characters, Emmerich’s overall vision for Moonfall was entirely uncharted territory for the director. “It’s totally different than anything else that I have done before. It’s about the moon. Let’s concentrate more on the space part than on the Earth part because otherwise, the [movies] all look the same.”

Moonfall is certainly not the same as his previous projects, and creating the space elements meant the visual effects team went as far as creating a computer simulation of the solar system to play through various scenarios to come up with the architecture of the moon’s interior.

“Roland got to design from scratch the interior of the moon,” Bradley enthuses. “And that’s something that nobody had any reference for, he could completely let his imagination go wild.” 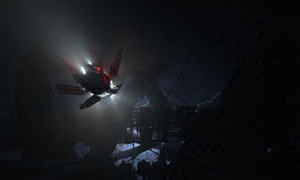 In fact, it really was only Roland’s direction that the cast had to work with while shooting those space scenes. “You give yourself over to the vision of the director [during those scenes] and the art department and the VFX department,” Wilson says.

“What you see on screen is nothing of what we saw. We were actors sitting in a little tiny cockpit, looking out our window, seeing blue and green,” Berry confirms. “So I take away with me, the understanding that I’m capable of doing that, and I challenged myself in a new way.”

Moonfall is certainly a movie that can make you see the world differently and for Bradley he hopes that it will “get inside people’s minds a bit and they’ll look up at the moon sometimes, and they won’t ever see it in the same way”.

“I hope it might put something on [viewers’] mind,” Berry agrees, “And make them think more deeply about what’s out there in the universe.”

For Wilson, he’s excited for audiences to experience a real sci-fi movie with Moonfall: “This real high concept science fiction element…that’s exciting to me,” he enthuses. “It makes people think and maybe go ‘oh, I didn’t expect that’. That’s something that really stuck out to me when I read the script.”

Finally, though the story appears to be complete, Emmerich isn’t ruling out the possibility of sequels as Moonfall was “always conceptualised as a trilogy,” so perhaps there are more conspiracies to delve into out there in space…

Moonfall is out in cinemas now. Read the SciFiNow review here.