No, we mean, Doom Patrol is laugh-out-loud-whilst-staring-at-the-TV-screen-in-utter-bewilderment-funny. What show can get away with a scene in which a superhero who controls his powers by flexing his muscles accidentally flexes the wrong muscle and renders an entire town to climax at the same time?!

This mainly comes from supervillain Mr Nobody (more about him later) who not only breaks the fourth wall to discuss Doom Patrol as a TV show, he actively makes fun of the show. While wearing that Doom Patrol merch of course! 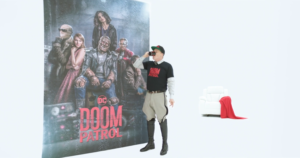 You think you’ve seen weird in a TV show? Well have you seen a vortex swallow an entire town after emitting from a donkey’s arse? We thought not. Well how about a mega make-out session between a giant rat and a giant cockroach? Didn’t think so…

From Larry’s hidden homosexuality to Rita’s shame at participating in a film producer’s abusive recruitment of young actresses, Doom Patrol really packs the punches. Add in Jane’s battle with mental health and Cliff’s desperate attempt to be a good father, and this show adds a real humanity to proceedings.

Well… actually it gives plenty of f*cks, thanks in no small part to Cliff’s dirty mouth. In fact, there are videos out there on the big wide web on just how many times Cliff drops the f-bomb (Google them yourself, do we have to f*cking do everything for you?!). Yes Doom Patrol firmly gives the finger to family-friendly superhero shows.

6. It has complex and flawed characters

Are the Doom Patrol superheroes? Or are they just a bunch of misfits who happen to have abilities? It’s very much a bit of both but either way, each member of the gang are deeply complex and flawed – they mess up a lot but we can’t help but love them.

7. It’s different to any other superhero show out there

We mean… we mentioned the donkey right?

8. It has great villains

Played by the incomparable Alan Tudyk, Season One’s big bad is Mr Nobody who’s grudge against The Chief takes the Doom Patrol on a crazy ride. He’s a fourth-wall breaking, pantaloons-wearing, narrating, dancing villain who’s the right type of weird for this show. And that’s not all! Doom Patrol also features a crazy Nazi scientist (of course), a deeply religious cockroach and a shady government agency called the Bureau Of Normalcy, among many others. Even the Doom Patrol themselves could also be seen as the bad guys sometimes… ooo deep…

The Doom Patrol is one big soppy, badass, kinda mean but also well-meaning family who love each other deep (very deep) down. They may be dysfunctional but who isn’t? And when they really need each other they’re there. Well… most of the time… we did say they were dysfunctional.

10. It has its own gender-neutral, living, sentient street

They’re called Danny and we love them! Danny is where all of the people who don’t quite fit in can go and be completely accepted. Danny is able to transport to any place in the world and can communicate with other beings by manifesting words. Danny can also host a great f*cking party!

Doom Patrol Season One is out now on STARZPLAY. Season Two will be out on 16 July 2020.

Doom Patrol Season Two: Who ya callin’ weird?
< Previous
Next >