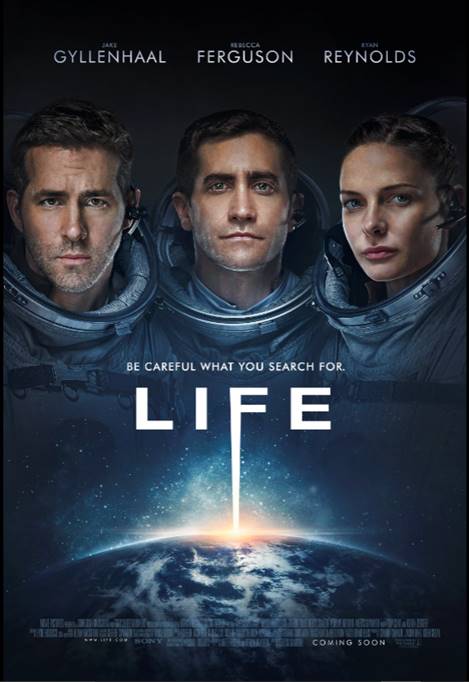 The Foley designers on Daniel Espinosa’s space horror turn the sound of bone crunching and squelching up to eleven to effectively transmit the growing hostility of an organism from Mars as it slithers across a space station destroying anyone that gets in its way.

The writing team from Deadpool are on board for this tense and entertaining ride, along with Ryan Reynolds, and they take their lead from Alfonso Cuaron’s Gravity and Ridley Scott’s Alien in pairing human drama and grand spectacle with gruesome catastrophe.

Rebecca Ferguson stars as Miranda North, the person in charge of disease control and shutting down the experiment led by exobiologist Hugh (Ariyon Bakare) when things take a turn for the worse. They’re joined by an international crew including Sho (the brilliant Hiroyuki Sanada), Kat (Olga Dihovichnaya) and Dr David Jordan (Jake Gyllenhaal) who has become disillusioned with humanity.

Jordan takes extreme pleasure in his orbiting surroundings and is reluctant to return to Earth. Reynolds gets to partake in some fun bickering with his fellow crew members and his reference to Re-Animator early on is a nice nod to the film’s Lovecraftian influence.

The tiny organism the crew first encounter under the microscope is a cute creation, taking on the form of a gooey jellyfish style creature. As it mutates the special effects team do fantastic work with the vicious luminescent monster becoming as relentless and indestructible as Jason Voorhees.

Espinosa elegantly guides the beast through the zero gravity setting with the crew incessantly shutting airlocks and doors on it. With the current global temperament so destructive and intolerant it’s tempting to read this aspect as a metaphor for the closing of borders.

The writers have lots of fun with the claustrophobic setting, but are somewhat undone in the final third with the human drama veering dangerously close to treacly sentimentality. However, Life does deliver a heap of gag-inducing moments and manages to have some sneaky surprises up its sleeve despite its similarities to its genre predecessors.