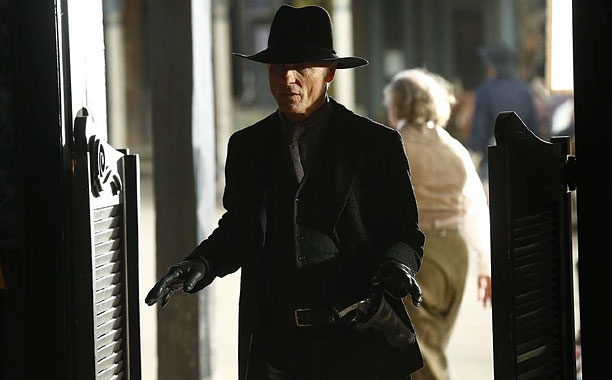 Nolan explains that the series will have the opportunity to go much deeper than Crichton’s movie. “What you feel in the film is there’s this larger world that he barely has time to explore. It leaves you breathless. Westworld goes from one f–king massive idea to the next,” he said. “The film has a structure that barrels forward—there’s this unstoppable android hellbent on vengeance—and it preceded The Terminator by 10 years.”

The pair stressed the need for secrecy, which isn’t surprising given that it’s co-written by a Nolan and produced by JJ Abrams. “Our commitment is preserving the old-fashioned audience experience,” he said. “[We want you to] come in knowing as little as possible. What we can tell you is that we intend to make the most ambitious, subversive, f–ked up television series.”

The pair reveal that the series will go outside the park, and that Westworld is “a place where you can be whoever the f–k you want to be and there are no consequences.” Joy also points out the timeliness of the endeavour, given Stephen Hawking’s recent warnings about developments in AI. “A lot of the people in the tech world who are actively pursuing the creation of AI are also, ironically, actively sounding the alarm bells of what that landscape would look like,” she explains. “I think it’s definitely part of the cultural conversation in a way that people can relate to it a lot more and see the kind of edges of this coming to fruition…I think we’re standing at an interesting precipice from which to both view the future and to hypothesize about the future. I think that all of that new information will help add new dimensions to this world.”

Westworld will air on HBO this year. Keep up with the latest sci-fi news with the new issue of SciFiNow.