It was Alien Day yesterday, according to whoever decided that this year, and Fox has decided to tease us with a little picture from the set of Alien: Covenant (via Scified). 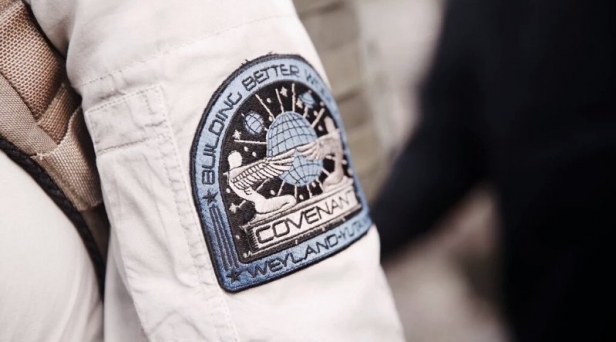 Yeah, so it’s definitely a teaser image, but there are some clues here, dammit!

First off, the company is Weyland-Yutani, not Weyland Industries as it was in Prometheus. Presumably, given the disastrous fate of the Prometheus mission which ended in the violent deaths of nearly everyone, including company head Peter Weyland (Guy Pearce) and his daughter Meredith Vickers (Charlize Theron), the company had to do a bit of a reshuffle. Weyland-Yutani have been a part of the franchise since Alien, and lasted through to some point before Alien: Resurrection.

There’s also that “Building Better Worlds” motto, which fans will of course recognise as being a franchise staple. Does that mean that the colony ship Covenant is on a terraforming mission? Well, let’s be fair, it might and it might not. This is a snapshot of a patch on an arm and we don’t even know who the arm belongs to. Still, let’s not pretend like we’re not excited.

“Bound for a remote planet on the far side of the galaxy, the crew of the colony ship Covenant discovers what they think is an uncharted paradise, but is actually a dark, dangerous world — whose sole inhabitant is the “synthetic” David (Michael Fassbender), survivor of the doomed Prometheus expedition.”

Alien: Covenant is released on 4 August 2017. Keep up with the latest genre news with the new issue of SciFiNow.