We all have that thing when we’re on holiday of wishing that we could speak the language. We could communicate better, we could really get to know people, we wouldn’t miss something important…

Jack (Andrew Simpson), the hitchhiking lead character of Abner Pastoll’s debut feature Road Games, needs to pay careful attention, as he and his fellow hitchhiker Véronique (Joséphine De La Baume) accept an invitation from friendly Frenchman Grizard (Frédéric Pierrot) to spend the night at his house until the ferries start running again from Calais. Something doesn’t feel quite right, but what is it?

Is it Grizard’s slightly odd behaviour, or his brittle wife Mary (Barbara Crampton)? Could the dead body on the news somehow be related to one of these four? Or is it all just in Véronique’s head?

We caught up with Pastoll after the film’s live commentary screening at FrightFest to talk about his inspirations, the difficulties of putting together a bilingual thriller, and why Wes Craven was so important.

First of all, how does it feel to be back at FrightFest for the second year running with the same film?

A little bit surreal! Obviously it’s an honour to be back at the festival two years in a row with the same film, it’s kind of unheard of in a way, but that’s why it was nice to do the commentary and do something a little bit different. It was really cool. It’s nice to be in the new venue as well, it feels a bit more like an event somehow. It’s almost like a convention.

So how did the idea for Road Games come about?

I came up with the idea a long time ago, when I was 19. I was travelling in France and was inspired by being in a foreign place, not being able to communicate with people, and I thought that would be an interesting thing to explore in a story, being the one out of place. I was staying in this creepy house, which was the first character that I came up with.

So I wrote this story, about 19 pages long, roughly what ends up being in the movie years later. I wrote that in 2001 on my holiday and came back to London, I didn’t print out a hard copy and then I had a hard drive crash where I lost all of my data, which was terrible, so I really forgot about it! Fast forward to 2008 when I was moving flat and I opened one of my drawers and this thing came flying out. It was the one hard copy of this script, so I read it and thought “This is kind of interesting, I can kind of remember this, this is cool!” So I got re-inspired to explore this idea from about 2008 and started working on developing it as a feature. 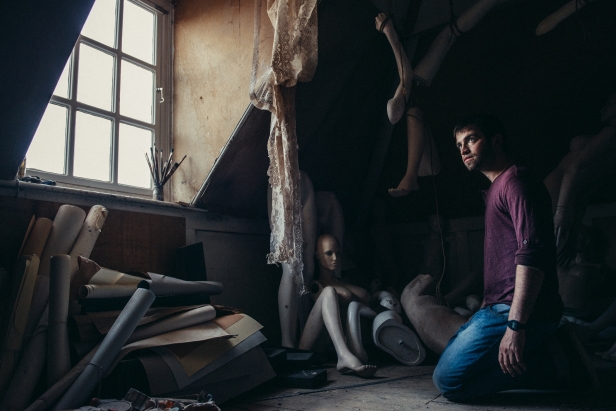 So it was always this story set in France?

The French element was always part of it, and it was I think because I came up with it while I was in France and I’ve always had a love for French cinema and French actors, I think that was really where it came from. It was always intentional to have a mixed language film.

Was that a challenge when it came to finding actors?

I mean, most good French actors can speak English so it was really about finding someone who understood the character and who I’d get along with. That’s always the case with any actor because you’re going to spend so much time together, unless they’re really amazing actors and you don’t get along with them and they’re worth that because they’re so amazing! But I was really lucky in that I had a great cast and they were all so easy to get along with, we really felt like our own family unit while we were shooting.

Was the language element more of a hard sell when it came to finding financing?

It was incredibly difficult because it’s a bilingual movie, so in England it’s a French movie and in France it’s an English movie and nobody understood. “That’s not going to work, how are you going to do it?” “Well, with subtitles.” “But nobody reads subtitles!”

And depressingly that’s kind of true, I think we’re pretty good with that in the UK, and especially these days there’s a lot of great foreign genre movies coming through that have an audience, but it was very difficult initially putting that together. So yeah, fast forward to now and I’ve actually made it, I’ve proved everybody who said it wouldn’t work wrong, and I’m not sure if I would do it again! 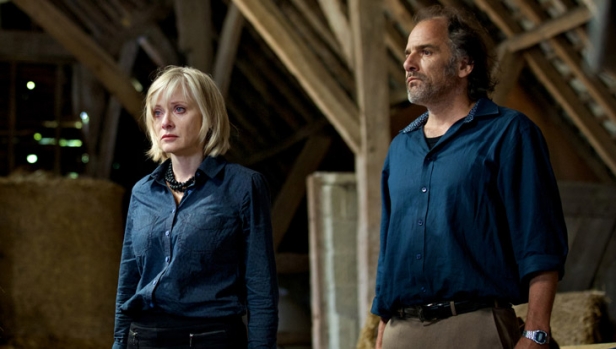 Barbara Crampton is great in this, it’s such a different role for her. How did she get involved?

She was involved in the project for a couple of years before we shot. Basically, I saw her again in You’re Next and realised that she was still acting, so I reached out to her on Twitter and said “Hi, how are you?” and she followed me back, and I was like “Oh great!” And then I got my casting director to send her the script and we started talking on Skype and it was great. It worked out really well.

She was interested because it was different to anything that she had ever done before and I think because she studied French a little bit when she was younger, she’s not fluent but she had to relearn a lot of it, but she liked that challenge, that this is something that she could do. She really liked the material.

Frédéric Pierrot was always my number one choice for Grizard, I kind of wrote the film for him, so to have finally made the film with him in it, it’s great! The other roles when I was writing the script I didn’t really have any idea, but I’m really happy with the cast that we got.

A good deal of the film is spent trying to figure out what these people are hiding, or if they’re just a bit off…Was it fun to work on that with the actors?

Yeah, because they’re all doing their own things and they’ve got different ideas and they’re bouncing off each other and there’s lots of interesting dynamics going on between them. It was great fun to work with them; they had lots of cool things to add to it.

Was it tricky to try and get that balance where you’re hinting but not giving anything away?

Yeah, you’re always very conscious of that. I think there are some elements that work better in the script, because once it becomes visualised it somehow becomes more obvious. There are a few things that we had to change, not too much, but there are certain moments that we thought, “Oh, we can’t do that because the audience will figure it out.” And there are some subtleties where there are things going on that are obvious if you know what happens, but in a good way. So there are these things that hopefully people will pick up on if they watch it a second time. 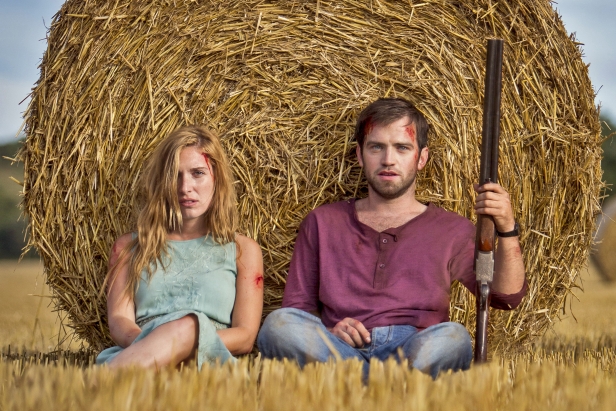 Were you inspired by any films or filmmakers in particular for Road Games?

That’s always a difficult one for me because my inspirations come from all over the place. I’m very inspired by Chabrol and Hitchcock films but I was never trying to emulate their movies. I felt like they were kind of guiding me but I wasn’t trying to make a film that was like their film. I was trying to develop my own style and have a go at that, and I think I learned a lot about the kind of movies that I want to continue making by making this one. My inspirations are from all over the place, it would be very difficult to pinpoint, I just love movies and cinema in general! It could be a piece of music or seeing someone on the street that inspires you, that’s pretty much how my mind works!

My favourite thing has been when reviews describe me as “French filmmaker Abner Pastoll” and I feel like the movie succeeded somehow if they think that I’m French!

I wanted to ask about the title. Obviously it’s not a remake of the Ozploitation movie Road Games.

Well, it is interesting because it was such a relatively unknown film that I thought nobody really knew about it, but it had a revival over the last few years at the same time that we made the movie, so people were asking, “Is it a remake?” The original title is actually a French title, Fausse Route, which means roughly translated the wrong path, but it has a double meaning which is a misunderstanding between people, which doesn’t translate into English, but that was the title that I chose because it really suited the movie, but I didn’t want to have Wrong Road because it sounds like Wrong Turn, it gives a wrong impression of what the movie is.

We ended up on Road Games because they’re playing psychological games, there are some roads, it helped maybe sell the movie a little bit. I’m not sure it was 100% the best title for the movie but, in my opinion, the title is the least important part of anything. As long as the film works, people won’t really care what the title is. I remember when they first announced The Guest, I thought “That’s a terrible title,” then I loved the movie so much that actually I love the title now! So yeah, for the title, I had no idea so many people were so fond of the movie to be completely honest with you. And now it’s being released on Blu-ray the same time as our DVD!

Can you tell us anything about your next project?

I can tell you a little bit. My immediate project is a crime thriller written by a Northern Irish writer Ronan Blaney, an Oscar nominee for a short film called Boogaloo And Graham last year, and we’re hopefully shooting that at the end of the year, we’ve just cast our lead actress, I can’t say who that is just yet, but she is amazing and I’m very very happy with how that’s coming together.

After that, my real passion project is a big car chase movie, but like a Western. You get a little hint of that in Road Games, but imagine you take the car chase from Road Games and make that the whole movie. Those are my two immediate next projects. I want to try all kinds of genres.

Do you remember the first horror film that really made a big impression on you?

I’ve always been drawn to dark movies in general but I think Scream…I had obviously seen tons of movies before that, but it seemed so fresh and different at the time, and it was one of the first horror movies that I actually saw on the big screen because I watched most horror movies on VHS tapes. That was a huge inspiration to me.

Wes Craven as a filmmaker was a huge inspiration to me; I was devastated when he passed away last year. It was on the same day that we world premièred Road Games so I was in this really weird mood, I didn’t even have the chance to meet the man. He’s a really interesting filmmaker, he kind of reinvented horror several times. A Nightmare On Elm Street to New Nightmare, and then Scream within two years…Wes Craven!

[laughs] In the beginning of the movie he’s the dead body! He’s a good friend of mine; I did a short film with him so he did a cameo. Hopefully I’ll cast him in better roles next time!

Road Games is available now on DVD from FrightFest Presents. Keep up with the latest horror news with the new issue of SciFiNow.