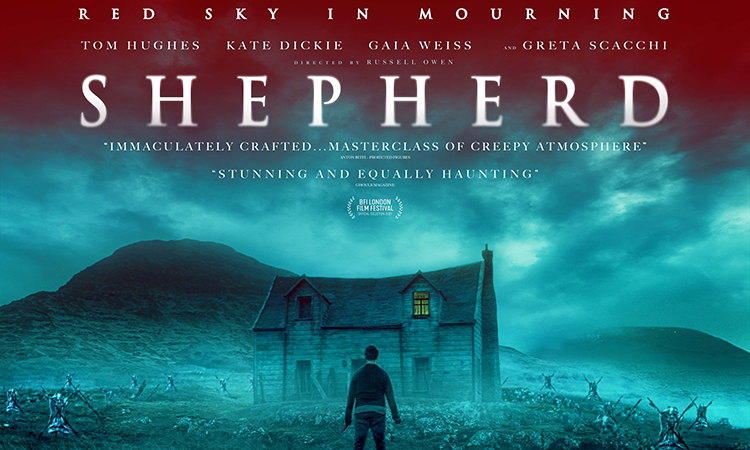 Based on the folk tale of a remote worker driven mad by isolation (the same story that Roger Eggers used for The Lighthouse no less, though the two are very different), Shepherd is an uncomfortable portrayal of one man’s descent into madness.

Haunted by the suspicious death of his wife, Eric (Tom Hughes) answers a help-wanted ad for a Shepherd. Qualified, and eager to escape his past, he takes up residence in the position’s run-down cottage, settling in to tend to the flock of sheep that inhabit an achingly beautiful, remote Scottish western island. Having said his goodbyes to an overbearing and belligerent mother, Eric and his canine companion, Baxter, are ferried to the island by a cycloptic Kate Dickie (delivering a terrifying performance as the stygian captain).

The fresh start he so desperately seeks is seemingly within reach when the dark mysteries surrounding the island’s previous inhabitants soon pervade his calm solitude. Their secrets are guarded by an imposing, monolithic lighthouse and protected by a malevolent supernatural force that start to torture Eric to madness, leaving him to question his own sanity and confront his demons. Or do they? Are there supernatural forces at work or is Eric imagining the whole thing?

Written and directed by Russell Owen, Shepherd is a gorgeous-looking film and his previous experience as both art director and commercial director shine through with gusto. The film is confidently peppered with arresting visuals that both suck you in with their beauty and shock you with their ferocity. But even without the flashy shock pieces, Owen manages to transform, with just the power of a camera lens, the beautiful and sweeping mountainous landscape of the Isle Of Mull into an eerily isolating, oppressive open prison.

With a minimal cast and even less dialogue, it’s up to Hughes to give audiences an insight into the character’s fractured and sometimes unreliable mind. Delivering a solid and sensitive performance against a backdrop of bold visuals and a wild island, Hughes’ performance adds a sharp edge to the tension, allowing audiences to dissect the very nature of insanity,

A taught physiological horror that hauntingly portrays the madness of isolation with striking visual clarity, while still leaving breathing space for interpretation, Shepherd isn’t for the faint-hearted. You’ll certainly second-guess that strange job advert in the back of the newspaper…

Shepherd had its World Premiere at BFI London Film Festival 2021 and will be in UK / EIRE Cinemas from 26 November. Read our interview with Russell Owen here.