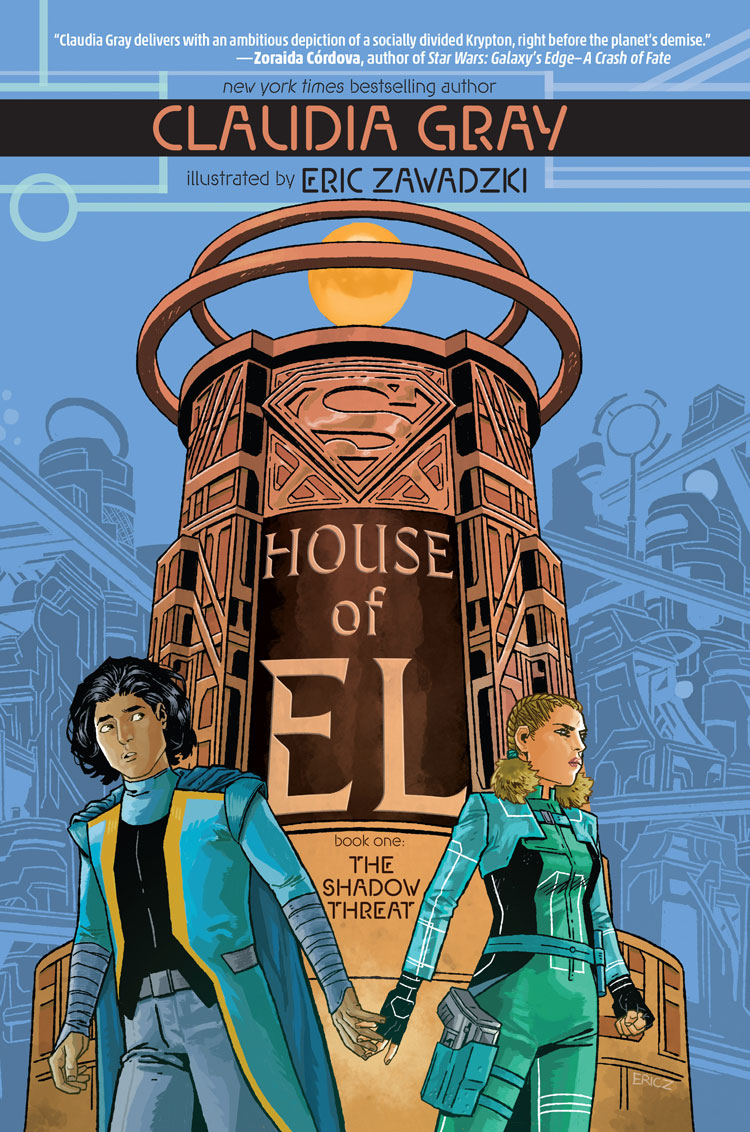 The demise and destruction of Krypton is one of the staples of comics history. Superman, the original superhero, needs his origin and the destruction of his homeworld is integral to his back story. However House Of El: Book One, The Shadow Threat is not a Superman story. Rather New York Times bestselling author Claudia Gray has made the bold choice to use this iconic piece of comics lore as a means to tell a very different tale…

The first book in a planned trilogy, The Shadow Threat is about Krypton’s impending destruction as told through the eyes of two of its young inhabitants from opposite ends of the social scale: Zahn, a young man born into wealth and privilege and Sera, a fierce and capable soldier, but ultimately a disposable asset.

Both have come to realise that there’s something very wrong with their planet. It is being destroyed by the climate-change-denying arrogance of its unimpeachable leaders and time is running out. They must therefore join forces to save what they can of their dying world.

While all the pieces are in play to facilitate a story primarily fixated on a doomed romance in the shadow of an apocalypse (and it does have that element, complete with a meet-cute and flirty banter), the core of The Shadow Threat is on our two leads as passionate and independently capable individuals. They are both just trying to do their part to make the world a better place, attacking the status quo of the social position they’ve been forced into and of the ruling classes who are blind to their inevitable destruction.

Indeed, Gray’s open, natural characters, alongside Eric Zawadzki’s clean art with neat cinematic framing, effectively capture a living, breathing, functioning world of Krypton, encouraging readers to become fully involved in the fate of this alien planet. Praise too, should be given to colourist Dee Clinniffe, who manages to balance the bright futuristic cityscapes with the shadow of the clandestine underground resistance.

Young adult titles can, at times, fall foul of talking down to audiences in an effort to be inclusive of even the youngest readers. It is refreshing, then, that House Of El: Book One, The Shadow Threat is a YA comic book that tackles activism, social responsibility and even love without ever being preachy.

House of El’s first book delivers an insightful and intelligent new viewpoint on the last days of Krypton. An engaging tale of rebellion and heroism that sets the board up nicely for a bigger over-arching story.

House Of El: Book One, The Shadow Threat is out now.

The Sunken Land Begins To Rise Again review: There’s something in the water

Skyward Inn Review: A place we can be alone together

Whisper Down The Lane Review: Satanic Panic
< Previous
Next >

The Sunken Land Begins To Rise Again review: There’s something in the water

Skyward Inn Review: A place we can be alone together