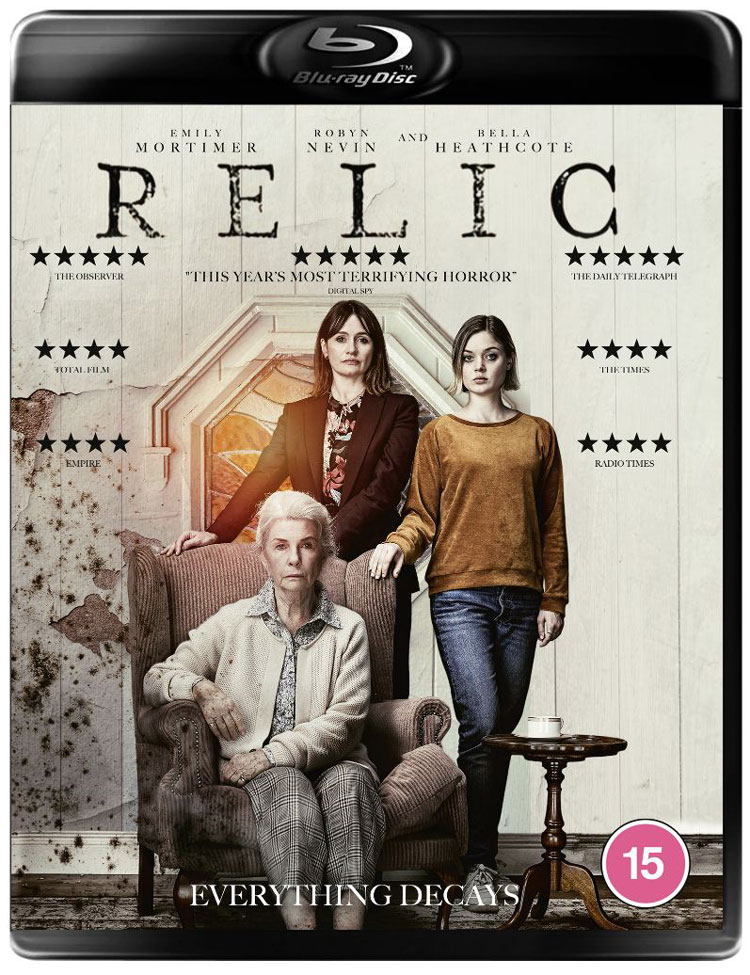 “Since your grandfather passed, this house seems unfamiliar – bigger somehow.”

As an oppressive slice of female-focused domestic gothic horror, Relic feels like a companion piece to Jennifer Kent’s The Babadook (2014). Its central property has the same sense of disquieting scale and shadow, whilst even the daylight scenes are clad in a cold light. In the place of grief and depression, the maternal relationships that drive Relic – or The Grandmadook, if you like – are defined by the hostile presence of Alzheimer’s disease.

From the elderly Edna’s (Robyn Nevin) disappearance that opens the film, a house festooned with post-it notes and rotting fruit, and her sudden reappearance, barefoot in a bloodied nightdress, Relic makes little effort to cloak its themes. Were it not for the creaking and groaning of the house, the spread of black mould across its walls, and the bruise that becomes a patch of rot on Edna’s chest, it would be a ‘mere’ drama.

This irreversible condition most often affects the over 60s, attacking their memory and reasoning skills, and eventually causing their death. It’s agony for the sufferers, who can become terrified, frustrated and furious at a world with no meaning while increasingly struggling to perform simple tasks. It’s heartbreaking for their carers, too, who witness their loved ones deteriorate, treat them as strangers with suspicion or hostility, or even lash out at them physically. Its potential to disturb and distress is obvious, and it’s certainly not squandered.

Indeed, Relic’s most haunting moments come from natural rather than supernatural. When Edna shares a moment of tenderness with granddaughter Sam (Bella Heathcoate, Dark Shadows, The Neon Demon) and turns on her a beat later – snatching back a wedding ring she gifted her previously with cries of ‘thief!’ – it hits harder than any of the overtly creepy scares in the final third. There’s a coolness between Edna and her daughter Kay (Emily Mortimer, Mary Poppins Returns), a distance that is mirrored between Kay and Sam, and the sense of isolation within these same walls grows as the horror deepens.

A secondary theme dances around the primary torment, one common to Australian horror. Exterior scenes with Edna take place within a forest that dwarfs the characters, the green canopy far above and the world beneath their feet one of dead branches and grasses, beneath which the wet earth into which Edna scrabbles. Kay dreams of her ancestor’s cabin in these same woods – only the surviving stained glass links it to the present family home. The rot of the Edna and her home, like the crumbling cabin before it, holds the suggestion that the white settlement of Australia is but a fleeting presence amidst these ancient and ageless trees.

A beautifully disturbing and atmospheric film that has a lot to say, but says it a little too quickly and rather too loudly for its lessons to truly linger.

Signature Entertainment presents Relic on Digital HD now and on Blu-ray and DVD on 18 January 2021. Win a copy of Relic on Blu-ray with our competition here.
< Previous
Next >

Relic: Win the horror on blu-ray with our competition!

Win gothic horror Gwen on DVD with our competition!