It was late, long after midnight and a storm had been raging outside for hours. Bed was the sensible option, but I was way past being sensible. I had drunk so much coffee that I could have fuelled a star ship. I’d been trying to make some headway on my new book, A Toaster on Mars. It was to be a humorous story about two cops—a human and a cyborg—but I wasn’t getting anywhere.

I peered despondently at the six words on the screen.

A Toaster on Mars

Lightning cast an iridescent glow across the room, followed by a huge craaaack! The overhead light flickered and died. So did my monitor.

Great. Just what I needed. A blackout. I crossed to the window as a bolt of green lightning flashed across the sky.

This was a sign. An omen that it was time for bed. Starting across the dark room, I noticed a pale, yellow glow coming from under my desk.

I pulled back my chair. My desk was a bulky executive-style relic of the sixties. It wasn’t valuable, but I’d written all my books at it, and kept it more for sentimental reasons than anything else. I peered underneath.

Where a tangle of cables normally lay was a fuzzy window that faded away at the edges. Instead of the back of my wall, I was now looking out onto an empty alley.

I rubbed my eyes. How much coffee had I drunk? Could you hallucinate on caffeine? I climbed under and hesitantly reached into the window, touching bright sunlight.

It only took me a few seconds to clamber through, and into the alley. Open-mouthed, I stumbled to the end. Flying cars were crawling across the sky in long lines. A robot was helping an old lady across the street. Children on a corner were playing some sort of futuristic computer game: holographic pterodactyls zipped and weaved around their heads.

Behind them flashed advertisements on a wall: Migrate to Mars, Live on Lunar Nine, Triple Your Lifespan.

A ticker tape sign ran across the top of a building.

It all clicked into place. I was in the future. How it had happened, I had no idea, but I immediately knew what I had to do. My eyes scanned the street, finally settling on a building at the end—a library.

I sprinted to the front door, passing an old man on the steps.

I nodded. Hurrying inside, I was relieved to see that there were still paper books on the shelves. Not everything had gone digital.

I grabbed the book off the shelf and read the spine. Darrell Pitt. A Toaster on Mars. There didn’t seem to be a checkout desk, so I headed out the door. An alarm blared. I broke into a run. Reaching the alley, I glanced back to see the old guy on the stairs had become entangled with a security robot. He turned and gave me a cheeky wave.

Within seconds, I was climbing out from under my desk—and not a second too soon. I looked back to see the time window fade and vanish. The overhead light flickered on. My computer rebooted. The storm had finished.

Rubbing her eyes, my wife stumbled sleepily into the room.

‘When are you coming to bed?’ she asked.

‘Is that a library book?’ she asked, seeing the book in my hand. ‘Don’t forget to return it.’

I’ll return it later, I thought. Much later.

Climbing into bed, I worried briefly about plagiarism, but then put it out of my mind.

It’s not plagiarism to copy your own work, I thought. Is it?

My last thoughts as I drifted off to sleep were of the old guy on the stairs. He had looked kind of familiar. Almost like gazing into a mirror at my older self.

Slipping into sleep, I dreamt of old age and happy futures.

A Toaster On Mars by Darrell Pitt will be released on 23 February. You can order it here. 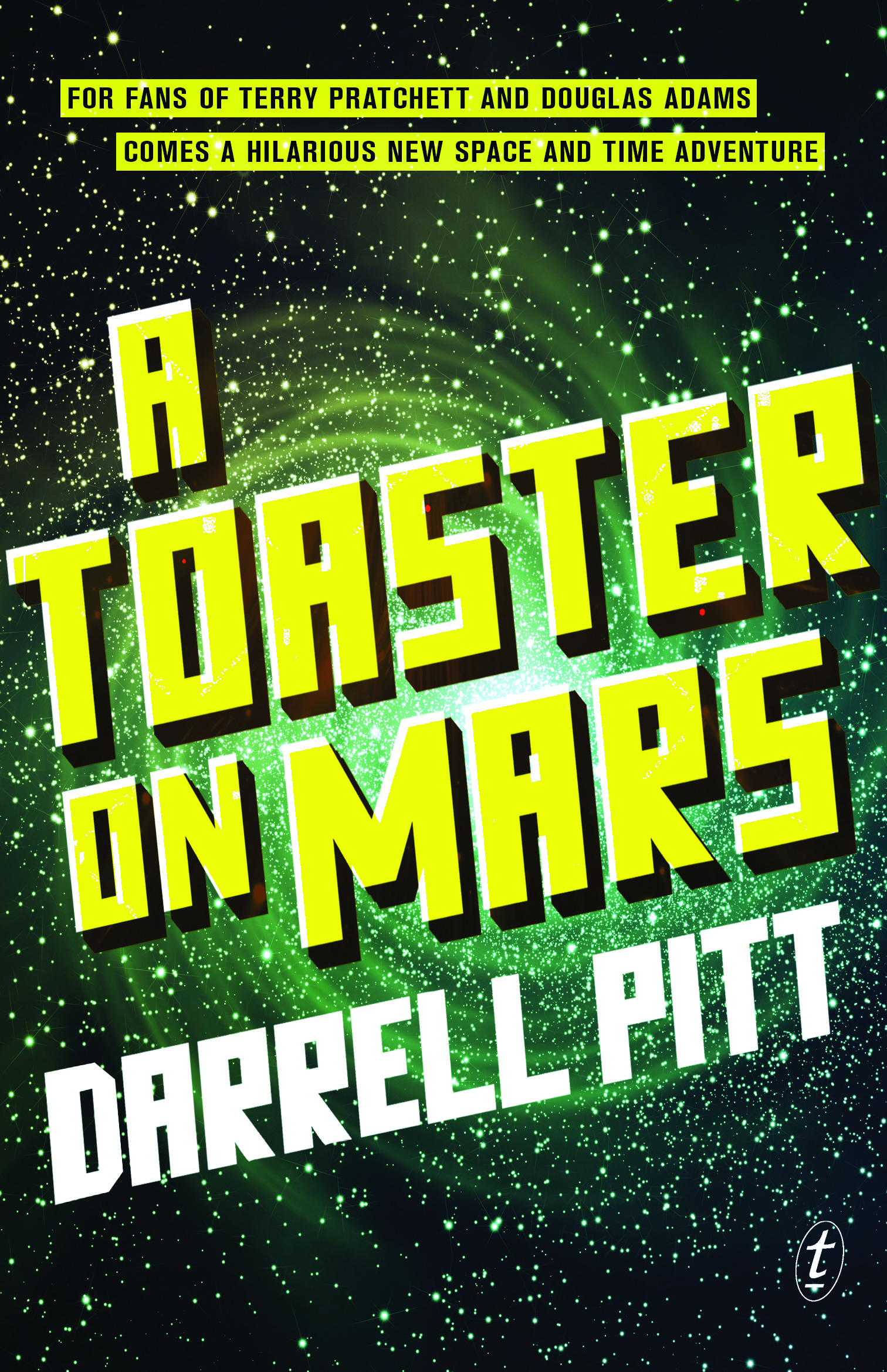