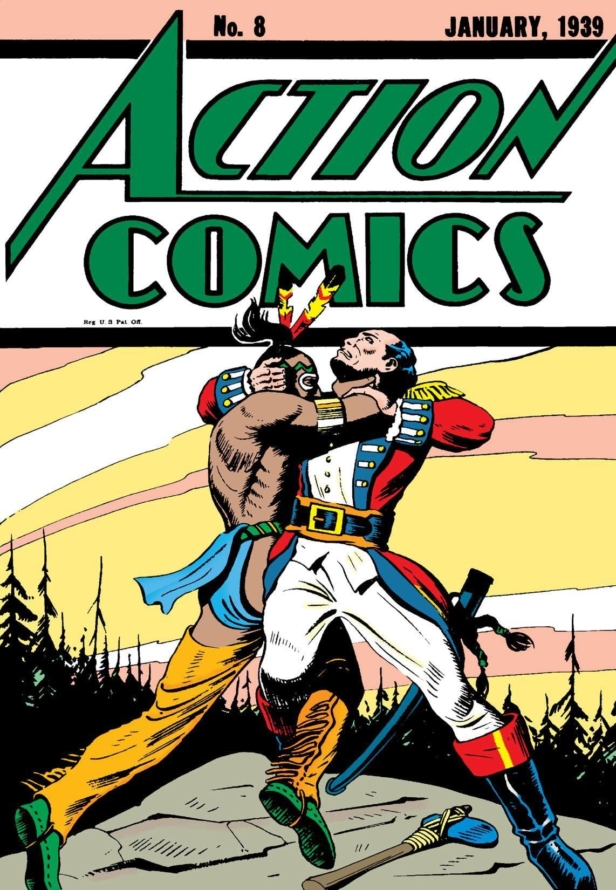 This early Superman is still a Super Liberal: deciding that society is to blame for juvenile delinquency he physically demolishes the slums of Metropolis with his bare hands. City Hall rehouses the poor in “splendid housing conditions” and kids are no longer forced into crime. Problem solved – in twelve raw, primitive, socially-conscious pages. AR 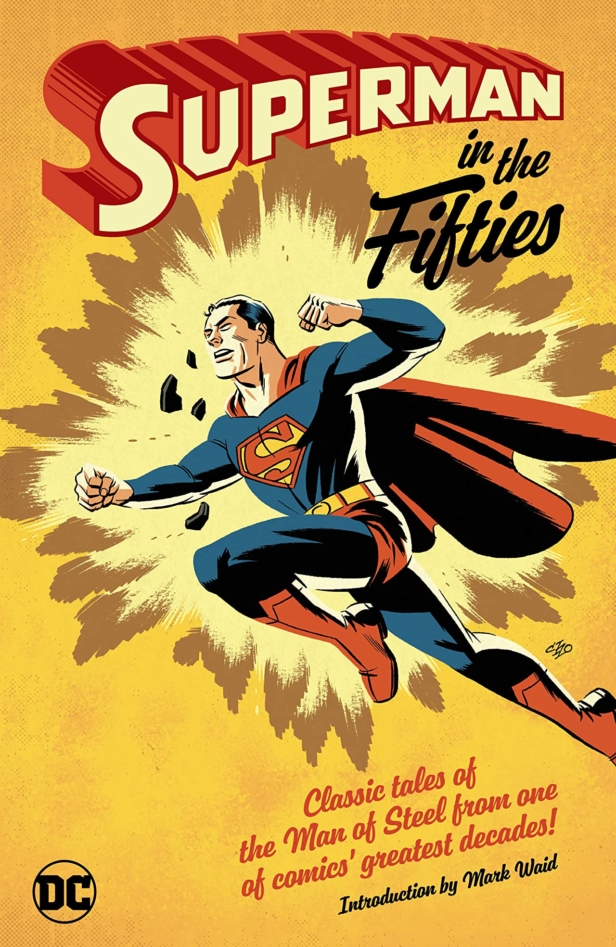 Alice Norton won’t believe Superman exists unless she sees him with her own eyes. Only problem is: she’s blind. A charming little fable about faith, healing and growing up, which hints at the religious overtones of the Superman legend without rubbing our noses in it. AR 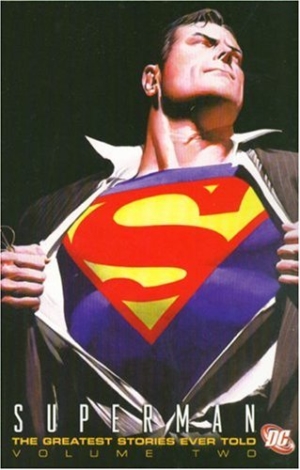 “The flames within the planet are like cold glaciers compared with the mighty love blazing between Superman of Earth and Lyla Lerrol of Krypton…” Superman accidentally goes back in time, meets his parents, falls in love, knowing all along that the planet is doomed. Totally tragic melodrama, plus silly costumes and pink fire-breathing monsters AR 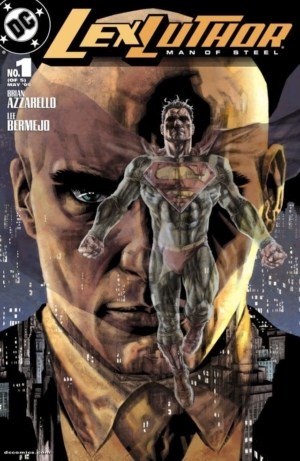 Lex Luthor: Man Of Steel, or Luthor as it’s been rebranded in more recent collected editions, is a Superman story from the point of view of his greatest enemy. Brian Azzarello allows us to see the true logic of Lex Luthor as a political thinker, and why Superman’s existence is such a destructive contradiction to his interpretation of the world; it’s a convincingly bleak look at the iconic character that is tonally very different to the other books on this list.

Thankfully, this is a portrayal of the more effective scheming genius Lex Luthor as opposed to the snarling maniac in a green power suit, with Lee Bermejo’s hyper-detailed artwork bringing Superman down to our level in memorably cynical fashion. Also of note in this volume: Bruce Wayne’s appearance for a brief fight with Superman offers a fantastic, spot-on contrast between his Dark Knight and billionaire playboy personas. SR

Superman confides to Supergirl that his childhood was sad because he didn’t have a Superplaymate — so Kara goes back in time to visit him in back in Smallville. They playing hide and seek in the asteroids and “catch” with lunar satellites, and then she has to go home. Touching, magical, innocent…and sad. Like Peter Pan with X-Ray Vision. AR

What will the world we like when Supergirl grows up? Well, Lois will be a bitter old maid; Jimmy will have no time for his Superfriend; Superman will be a broken down has-been…And then the dog catcher will take Krypto off to the pound. OK, it turns out to be a dream, but it’s still the bleakest Superman story ever. AR

A baffling bit of Jungian landscaping from the one of the oft-overlooked power duos of the late Silver Age, Steve Gerber and Gene Colan, bundles together all of the previous decade’s Kryptonian supervillains as they torment the Daily Planet’s Charlie Kweeskill like spectres from the Phantom Zone. Poor Kweeskill sets into motion a chain of events that drags Superman into this hellish otherworld, while the Kryptonian villains unleash havok on earth.

Last seen over a decade early, Kweeskill is in fact the wrongly imprisoned Kryptonian scientist Quex-Ul who has a pretty poor history in terms of being a dupe for more powerful villains. Fantastic Seventies sci-fi dreamscapes Colan, and spectacularly bleak and ponderous writing from Gerber make this a deranged classic that pre-empts Grant Morrison for mining the obscure history of the Man of Steel. JH

An evocative and nostalgic sort-of origin story for Clark Kent, this gorgeous book essentially tracks Superman’s journey from a young man coming to grips with his powers to the fully-matured Man Of Steel, told across the four different seasons by the various key people in his life. There’s an aching sense of longing to For All Seasons, particularly in its opening Smallville-set chapter, where Clark’s parents are contemplating their son’s finite days in his innocent country town bubble.

While Jeph Loeb’s dialogue relays a strong and passionate knowledge of Superman’s cast of characters, it’s the extraordinary artwork by Tim Sale and colourist Bjarne Hansen that gives this a lost American Golden Age quality – undoubtedly some of the best Superman imagery you will ever see. A superb story that reaches all the major touchstones of the character’s DNA. SR

Superman loves Lois Lane…but he also loves Lana Lang; he is human…but he’s also Kryptonian. Solution: split him into two heroes, who together defeat Lex Luther, abolish crime, find a solution to all known illnesses, return Kandor to full size, reconstitute Krypton, and live happily ever after. The sort of bonkers universe-bending yarn that “imaginary stories” were invented for. AR

The first, and best, Marvel/DC crossover. No jiggery pokery about parallel worlds: just take it for granted that Supes and Spidey end up and the same conference. Cool to see Doctor Octopus and Lex Luther sharing a cell; cool to see Superman stopping a tsunami; but supercool to see Jonah Jameson and Perry White moaning about their staff. (“Clerk Kent…sounds like Peter Parker. Good but…unreliable.”) AR

It’s easy to think of the superhero deconstruction as something that entered comics with Alan Moore, but a decade earlier anxiety about changing American society had spilled over into the way that artists, writers and readers saw their superheroes.

Playing with a theme that would later come to the fore with books like Kingdom Come, Elliot S Maggin and Curt Swan brought Superman before the Green Lantern Corps’ Guardians of Oa who accuse him of stunting mankind’s growth by making them dependent upon their all-powerful, all-seeing Kryptonian guardian. Stung by their criticism, Superman returns to Earth and brushes off several cries for help, telling a a group of immigrant workers protesting against their abusive treatment and living conditions that “What you really need is a super-will to be guardians of your own destiny.”

It’s an uncomfortable prelude to the scroungers-vs-strivers self-sufficiency of the coming Reagan/Thatcher era, simultaneously showing the conflict at the heart of a character this powerful, and positioning as the ultimate moral arbiter. It’s hard to read the Superman in Frank Miller’s Dark Knight Returns or Mark Millar’s Red Son without thinking of Must There Be A Superman? JH

A perfect primer to not just the world of Superman, but Batman too, as Dave Gibbons – then well and truly in ascent thanks to Watchmen and Give Me Liberty – accompanied by the evocative splash pages of Steve Rude (Nexus, The Moth), bring something of an outsider perspective to the Dark Knight Detective and the Man Of Steel, distilling them to their basic commonalities and differences as Lex Luthor heads to Gotham, and the Joker causes chaos in Metropolis, forcing the DC Universe’s leading lights together for the first time.

Once you see that incredible introduction showing night falling in Gotham just as the sun rises in Metropolis on the opposite close, a cloud of bats in the former and doves in the latter, while the Batman chases down a mugger and Superman stops a crashing bus, it’ll stick with you for the rest of your life. JH

8. For The Man Who Has Everything
Writer: Alan Moore
Artist: Dave Gibbons
Run: Superman Annual #11 (1985)
Buy: Pick up DC Universe: The Stories Of Alan Moore for £6.99 from Amazon.co.uk

That bloody British Invasion, eh? Johnny Yank spends 50-plus years working on Superman, and the mad monk of Northampton swans in with frequent collaborator Dave Gibbons, and with an equal helping of Silver Age filings (there’s blink-and-you’ll-miss-em cameos from Hawkman and Hawkwoman, Brainiac, Adam Strange, Hyathis, Bolphunga the Unrelenting, and Warworld) and pulp sci-fi weirdness tells pretty much the best self-contained Superman story of the Pre-Crisis era.

Superman’s closest Superfriends – including Superchum-era Batman and Robin – gather in the Fortress Of Solitude to present him with birthday gifts, but one of them is a plant – literally and figuratively – from alien warlord Mogul, that intoxicates him with dreams of his heart’s desire – a Krypton that hadn’t exploded.

Superman and the rest of the Justice League return to a world thrown into chaos by a swell of warring vigilantes, devoid of the values that the original heroes pioneered. While this isn’t strictly just a Superman story – indeed, it deals with the entirety of the DC Universe and its possible end – the Man of Steel is at the crux of the tale, with his values challenged by both his allies and enemies. Alex Ross richly reinterprets DC’s cast of icons, with Superman’s reappearance early in the story marking an especially visually stunning portrait of the character, as well as a moment fans of the superhero are unlikely to forget. Despite its ambitious scope, Kingdom Come intimately explores the motivations behind Superman, as well as feeling like the final word on the DC Universe by its closing pages. SR

The final two episodes of Superman before the first Crisis reboot, presented as if they were the last two Superman stories ever – every dangling Silver Age plot thread is resolved, and our hero finally dies. (Yeah, right.) As the fellow said: “This is an imaginary story: aren’t they all?” AR

An Elseworlds story that sees Clark Kent growing up on a Ukrainian farm in the Soviet Union rather than Kansas, Red Son shows us what happens when Superman’s influence is transposed to another part of the world, as well as the implications this has for mankind.

Red Son is a sweeping epic, exploring Superman’s political implications in these circumstances and the conflict his existence creates, while also shedding light on the evolution of the bitterly obsessed American Lex Luthor by contrast. A well-conceived, definitive vision of Superman by Mark Millar, with an extremely concentrated narrative – and you’ll never predict the ending. SR

John Byrne’s Superman reboot is still controversial today (Clerk Kent as an 80s yuppie; a Superman who summarily executes General Zod). But he sure could pick villains and orchestrate battles: here, Superman confronts ultimate evil deity Darksied on his home turf, and actually dethrones him. Epic heroic stuff worthy of the man of steel, for a change. AR

A deft, streamlined reimagining of Superman’s classic origins, Mark Waid – the bard of superhero mythology – and the effortlessly dynamic Leinil Francis Yu’s Birthright reconciled all the competing elements of the character’s beginnings into one tight package.

Waid brought the Kryptonian aspect of Superman to the fore, reinventing Jor-El as a noble warrior scientist who made the ultimate sacrifice, and Lex Luthor as a wounded, driven maniac whose desire to be recognised pushes him further and further over the edge.

Waid’s Superman is a man who makes mistakes and can be beaten, Waid’s Clark is someone who allows himself to be belittled and ostracised to preserve his identity, Pa Kent is a man frustrated and worried about his son’s search for meaning and his alien identity, and Luthor’s ruthless intellect is every bit the match for Superman’s godlike powers.

A very real and emotionally complex retelling, though Birthright was written out of canon by Infinite Crisis and the New 52, it remains an inspiration for Man Of Steel which is more than the reality punching Superboy Prime managed, eh? JH

Establishing the rules for a post-Crisis On Infinite Earths Superman, the fundamentals of the character’s contemporary lore basically stem from John Byrne’s influential series (though Geoff Johns’ Secret Origin gave us an updated version), abandoning the more complicated elements and streamlining the icon’s back story.

It was an entertaining and effective story that reignited interest in Superman at a crucial time, and for many readers acted as their entry point into comic books involving the boy scout. SR

Just The League: The Best Justice League Comics
< Previous
Next >