It’s rare that long-delayed films turn out to be any good, and that trend remains resolutely unbucked with Universal’s fantasy adventure Seventh Son, which was originally scheduled for release a year ago.

Based on the first novel in Joseph Delaney’s The Wardstone Chronicles series (a potentially lucrative franchise at 13 books to date), the film is directed by Russia’s Sergei Bodrov, and stars a pointy-bearded Jeff Bridges as boozy witch-hunter (or ‘Spook’) Master Gregory, who suddenly finds himself in need of a new apprentice after his current one (Kit Harington, looking like he got lost on the way to the Game Of Thrones set) meets an untimely end.

When Gregory meets pig farmer Tom Ward (Ben Barnes) – the seventh son of a seventh son – he gives him a crash course in witch-fighting, and the pair set off in pursuit of the Spook’s sworn nemesis, evil shape-shifter Mother Malkin (Julianne Moore). However, things get complicated when Tom falls for Alice (Alicia Vikander), a young enchantress who has a connection to Malkin.

Bridges is as watchable as always, but you sense his heart isn’t really in it, and his comically indecipherable accent isn’t as much fun here as it was in True Grit. It is admittedly amusing to see him square off against his erstwhile Big Lebowski co-star Moore, but her enjoyably campy performance is overshadowed by her frequent transformations into a CGI dragon. She does at least get to wear a fabulous outfit though, as provided by revered costume designer Jacqueline West. 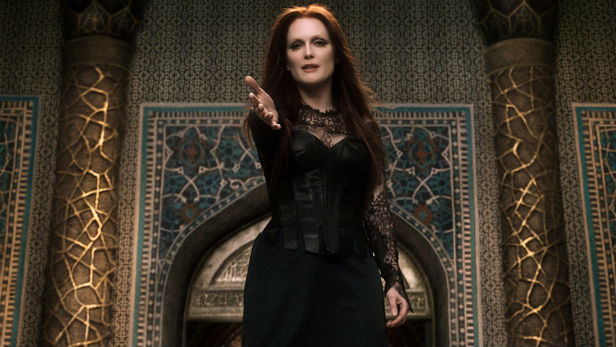 As for Barnes, he’s frustratingly bland as Tom, which includes being weirdly passive in the acceptance of his fate as dictated to him by the Spook – it doesn’t seem to bother him that he could get fried by a dragon at any moment, for example. On top of that, the script fails to make use of his fabled seventh-son-of-a-seventh-son gift of second sight beyond using it to run into Vikander (although that is admittedly pretty useful). However, having run into her, Barnes fails to generate any meaningful chemistry, so the central romance falls painfully flat and is bound to disappoint fans of the book.

Bodrov proved that he could handle an action sequence with his 2007 epic Mongol, and he at least knows how to direct a fight scene without resorting to the sort of choppy editing where you can’t tell who’s hitting who. The problem is that the action sequences rely too heavily on CGI flashes and bangs, and you long for characters to just have an honest-to-goodness sword fight. Furthermore, the pacing is irritatingly uneven throughout. That said, the scenery is attractive, even if you sometimes have difficulty telling actual British Columbia from its CGI counterpart.

Ultimately, despite the presence of acclaimed talents such as production designer Dante Ferretti and Star Wars VFX maestro John Dykstra, the film ends up feeling uncomfortably reminiscent of 2011’s fantasy misfire Season Of The Witch. A large part of the blame rests with the lacklustre script, which is laden with dismal dialogue and contains a bewildering number of under-developed characters (step forward Olivia Williams as Tom’s mum and Djimon Hounsou as henchman Radu), while neglecting to do anything interesting with the overly familiar plot.

In short, this is just about watchable thanks to Bridges and Moore, but the script and direction are disappointingly dull, rendering any further franchise instalments unlikely.