There’s been a lot of talk about how risky Preacher could be for AMC but this is an incredibly confident opener, packed with dark humour, brutal violence, engaging emotional conflict and a whole lot of weirdness. Fans of Garth Ennis and Steve Dillon’s comic will obviously be familiar with that wonderful combination, and while the show won’t be slavishly sticking to the established storyline, it’s so great to see that the spirit of Preacher is very much intact.

For the uninitiated, Preacher centres on Jesse Custer (Dominic Cooper), the local padre in the grotty little town of Annville, Texas, who’s lost his faith in God and, increasingly, in his parishioners. His daily struggle through childhood nightmares, hangovers, drinking, putting up with the awful people of Annville and more drinking is about to be interrupted by the arrival of his old flame and career criminal Tulip O’Hare (Ruth Negga), hellraising Irish vampire Cassidy (Joseph Gilgun) and, of course, Genesis, the voice of God.

The trailers for Preacher made it look like there’d be a strong emphasis on dark and gritty, and while it is both those things, this show wears its weirdness on its sleeve. From the opening retro journey through space as Genesis howls through the universe on its way to Earth, it’s clear that this is a series that is very happy about getting to show exploding priests, a cow getting eaten by a splattered vampire, and, of course, Eugene, otherwise known as Arseface (Ian Colletti).

But there’s a real effort to keep things grounded. Eugene’s situation is immediately affecting: the sweetest soul in Annville is having a crisis of faith of his own and needs Jesse’s reassurance that God’s still listening. The small town nastiness is slightly less outlandish than in the comic, which makes the spectres of racism and domestic abuse even more threatening. The best example of this is W Earl Brown’s excellent performance as Sheriff Hugo Root, whose tightly wound formal manner seems to be held in place with visible effort, his dislike of Jesse and this new progressive world coiled up inside him like a spring. 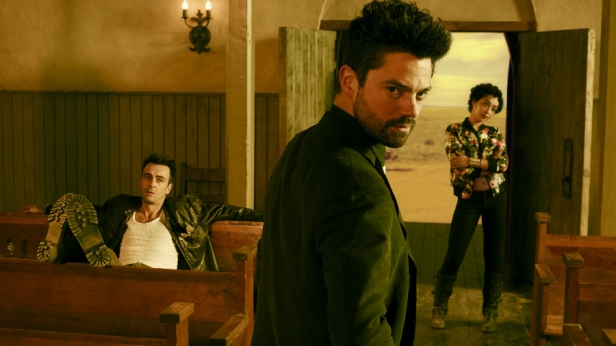 In the pilot, the burden of seriousness falls on Jesse’s shoulders. This is a man desperately struggling to do the right thing, to not take the easy shortcuts, which means not just beating the shit out of the abusive Donnie Schenk (Derek Wilson) until he’s left with no other option. This means that Cooper is having comparatively less fun than the other two leads, but the smirk on his face as he takes Schenk and his gang of Civil War re-enactors apart is a nice hint at Jesse’s dark side, and the actor does good work showing us Jesse at his lowest point while showing he’s still got a code.

Negga and Gilgun, meanwhile, get to have a brilliant time, and both are given incredible introductions. The plane fight, in which Cassidy realises that everyone on the private jet wants to kill him, is brilliantly anarchic, brutal and bloodsoaked, and Gilgun absolutely makes the most of a character that seems like it was written for him. He’s a force of nature, as is Tulip O’Hare.

That brilliantly choreographed car-bound fight sequence is just the start. Her scene with two impressionable young kids is such a great introduction to the character’s personality and values, and Negga effortlessly nails the blend of humour, strength, heart and ass-kicking. The gear-shift from murdering a man with a corn cob to cheerily telling these children that self-reliance is important, but that sometimes you need to show your loved one that they’ve made a mistake, is perfect, and dammit, that bazooka reveal was a joy. The meeting of Cassidy and Tulip is yet to come but we can’t wait.

There’s a slightly more deliberate pace here than die-hard fans of the comics might be expecting but it’s fantastically watchable, and readers will pick up on the hints at what’s to come (why hello, Quincannon Meats). It’s also worth noting that the work put into creating Annville as the base of this first season is very well done, with characters like Lucy Griffiths’ dependable single mum Emily and Ricky Mabe’s ineffectual mayor Miles Person adding some balance to the general unpleasantness of this town.

The casting is perfect, it’s unpredictable, shocking (even though we kind of knew where the scene in the retirement home was going…damn) and funny, and honestly, it’s the most fun we’ve had watching a pilot in ages. We can’t wait for Episode 2.

Preacher Episode 1 is available on Amazon Prime in the UK and airs on AMC in the US. Read our interviews with the cast and creators in the new issue of SciFiNow.