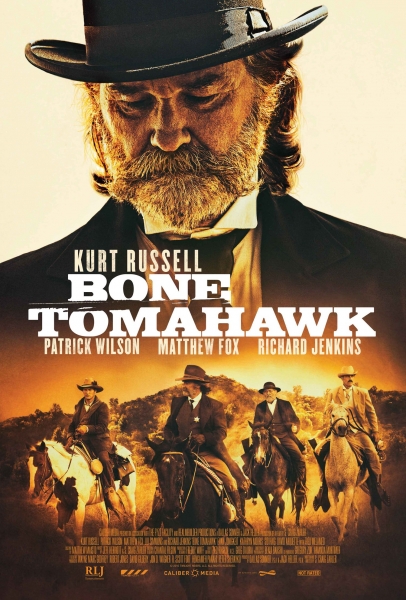 The ‘horror Western’ subgenre is a small one, so any new additions are more than welcome. While   is much more a Western than it is a horror, fans of both genres should find much to enjoy in S Craig Zahler’s brutal slow-burner.

When Sheriff Franklin Hunt (Kurt Russell) puts a bullet in a drifter’s leg, Arthur O’Dwyer (Patrick Wilson)’s wife Samantha (Lili Simmons) is on call to give him medical treatment. Come dawn, they are all missing, abducted by a savage tribe of Native Americans – a band of troglodytic cannibals.

Hunt, O’Dwyer, gunslinger John Brooder (Matthew Fox) and back-up deputy Chicory (Richard Jenkins) set out in pursuit, but with O’Dwyer’s broken leg and the simple fact of four men against the wilderness, do they have any hope of getting back alive?

Zahler’s Old West as a dangerous, unwelcoming place where horrors are waiting just outside the doors of the little outpost of ‘civilisation’. It’s a world that these men don’t understand, despite their best efforts, riding into the desert with no time to prepare and no real notion of what they’re going to do when they catch up with their quarry. The quietly trigger-happy Brooder is arguably the best equipped, but he’s so tainted by his hatred of the natives that his only relationship is with his horse.

There’s punishment waiting for these men. When the horror arrives it is brutal, with one sequence sure to turn stomachs and send your hands flying to cover your eyes. It’s the Jack Ketchum-esque final act that brings the leisurely paced film to a punishing end.

There are some problems, mostly with the pacing. It’s overlong at 132 minutes, and the characterisation seems to have been spent primarily on Chicory. However, Jenkins is sublime, and his scenes with Russell are a joy.

Requiring both patience and a cast-iron stomach, Bone Tomahawk is an acquired taste, but it stays with you long after it’s over.