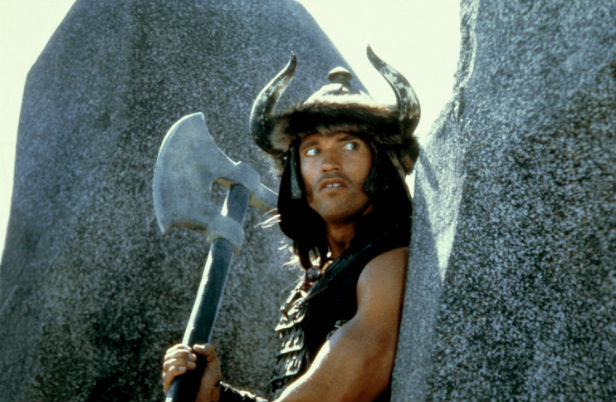 The Legend Of Conan has been bubbling away for so long now that we almost forgot it was happening. Now it seems that Arnie may be bellowing “CRUM!!!” sooner than we thought, as the script is ready and Arnold Schwarzenegger is excited.

The Arnold Fans spoke to writer Chris Morgan about what we can expect from the new Conan movie, and asked if it would be light hearted, to which Morgan gave a definitive response.

“A light-hearted Conan?! CROM! No. Our tone is a logical extension of the character established in the ’82 film…but 30 years later. When we meet him again, Conan has been many things over the course of his life — a thief, a warrior, a pirate, a king, a legend — and is now an older man. Think Unforgiven…with a sword-wielding barbarian.”

Morgan also teased that “at least three” characters from the classic films will return, and that they’re definitely trying to go for the brutal tone that John Milius established in his original.

“The goal, the dream, is to live up to his world,” he said. “To make it worthy. And to expand on it in a truthful way that audiences will embrace. We’re very lucky that the architects of this new film — the writer, the producers, the studio and most of all, Arnold — who is Conan — are all first-generation fans who either worked on the film or who came along for the ride, cheering from their theater seats opening night. We plan nothing more than to immerse ourselves in the world Milius envisioned from Robert E. Howard’s unforgettable stories and Frank Frazetta’s stunning artwork. I can’t give specifics (nobody likes a spoiler!), but know we are honoring the locales, the religions and the traditions of the ’82 film.”

Producer Fredrik Malmberg also added that they are hoping to start production this Autumn.

What do you think? Are you excited to see Arnold return to the role? Or did the Jason Momoa put you off the prospect of more Conan?

You can buy Conan The Barbarian on Blu-ray for £7.10 at Amazon.co.uk. Keep up with the latest genre news with the new issue of SciFiNow.