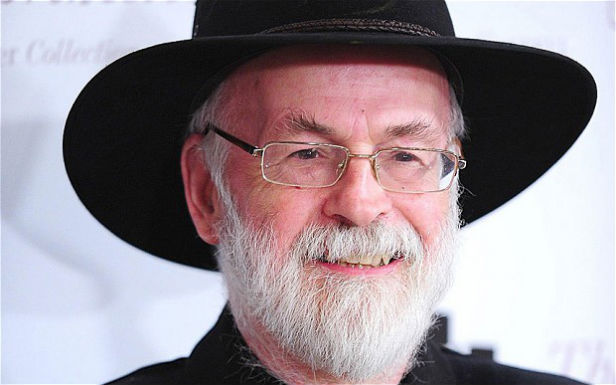 The author Sir Terry Pratchett has passed away at the age of 66.

The author of the beloved Discworld series, Good Omens (co-written with Neil Gaiman) and The Carpet People, among many other works, died at his home near Salisbury “with his cat sleeping on his bed, surrounded by his family,” said Transworld Publishing’s Larry Finlay (via BBC News).

“In over 70 books, Terry enriched the planet like few before him,” he stated. “As all who read him know, Discworld was his vehicle to satirize this world: He did so brilliantly, with great skill, enormous humour and constant invention. Terry faced his Alzheimer’s disease (an ’embuggerance’, as he called it) publicly and bravely. Over the last few years, it was his writing that sustained him. His legacy will endure for decades to come. My sympathies go out to Terry’s wife Lyn, their daughter Rhianna, to his close friend Rob Wilkins, and to all closest to him.”

Pratchett was diagnosed with Alzheimer’s disease eight years ago and spoke about his determination to write through the illness and the difficulties of doing so.

He wrote more than 70 books and sold more than 85 million worldwide. Pratchett was knighted in 2009.

He will be sorely missed by all of us who discovered the prophecies of Agnes Nutter and spent hours upon hours losing ourselves in the strange, hilarious, endlessly entertaining and incredibly vivid streets of Ankh-Morpork, with its cowardly wizards, questionable curries, impenetrable traditions, well-intentioned City Watch and, of course, Death, the character who Pratchett’s Twitter account channelled to announce the news earlier today.

AT LAST, SIR TERRY, WE MUST WALK TOGETHER.

Terry took Death’s arm and followed him through the doors and on to the black desert under the endless night.