With surprisingly little warning, the teaser trailer for Rogue One: A Star Wars Story, the first in a series of standalone films set in a galaxy far, far away, is here. Directed by Gareth Edwards and starring the likes of Felicity Jones, Diego Luna, Riz Ahmed, Mads Mikkelsen, Alan Tudyk and many more, it follows the fledgling Rebellion as it attempts to infiltrate the first Death Star and find a way to destroy it. It looks unlike anything we’ve seen from the saga before, and we couldn’t be more excited at the prospect of finally seeing it. In the meantime, we went through the trailer in minute detail for your (and our) pleasure…

1) Meet Jyn Erso (Felicity Jones) – seen here being brought in for, and we quote, “Forgery of Imperial documents, possession of stolen property, aggravated assault, resisting arrest.” That’s quite a rap sheet our protagonist has.

2) As she’s led away, we see her walking through an X-Wing hangar in what looks like it could potentially be a temple. Is this the base on Yavin IV?

3) Yep, it’s Mon Mothma! Last seen rallying the troops in Return Of The Jedi, the future leader of the New Republic (read Chuck Wendig’s Star Wars: Aftermath) here is played by Genevieve O’Reilly who, funnily enough, played the same character in Revenge Of The Sith, although her scenes were cut from the film. Here, she has better luck.

4) Jyn shares a knowing glance with an unnamed fellow Rebel played by Diego Luna. Our theory? He’s the one who brought her in/recruited her.

5) “On your own from the age of 15. Reckless, aggressive, and undisciplined.” To these charges she simply shrugs, “This is a rebellion, isn’t it? I rebel.” Indeed, she seems to be doing well, taking out a group of Stormtroopers before an unnamed accomplice – Riz Ahmed’s character, perhaps? – blows some stuff up for her.

6) Ahead is a very familiar-looking Super Star Destroyer – Darth Vader’s personal flagship, the Executor, by any chance? Although not seen in this trailer, the Dark Lord of the Sith is heavily rumoured to appear, so we wouldn’t be surprised.

7) Although even this goliath pales in comparison to the first Death Star, the final touches of which are being put into place here. It’s that’s the focal point of the story: the Rebels want to know what it is, and how to destroy it. They’re in for a rude awakening. 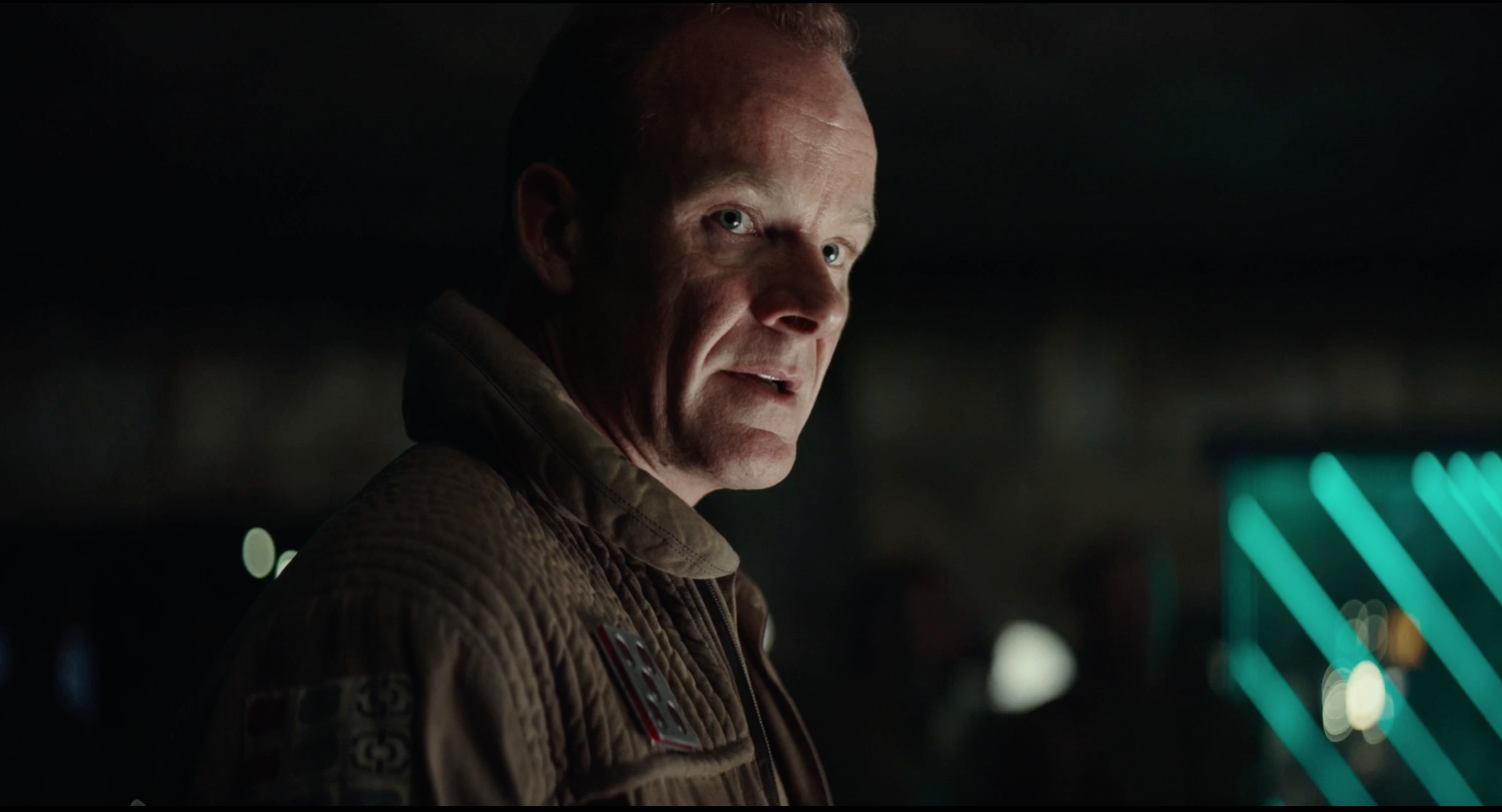 8) “Is that clear?” An unnamed Rebel officer played by Alistair Petrie (most recently seen in the BBC’s The Night Manager, but also familiar to genre fans for turns in Cloud Atlas, Victor Frankenstein and TV series Utopia) barks orders to a surly-looking Jyn.

9) As sirens blair, Jyn and Diego Luna’s character race off with a group of X-Wing pilots. Note the helmet insignias: Red and Green Squadrons are both ready and present.

10) Ben Mendelsohn’s Imperial baddie looks on. In James Luceno’s book Tarkin, Moffs were allowed to choose their own uniforms, and it looks like he’s made the most of it here. If he manages to be as scary as his character in Animal Kingdom then we’ll be impressed.

11) Stormtroopers go out on patrol (in a tank, no less), while a shifty-looking bystander looks on. We suspect that this bystander is not so innocent, and that these troopers are due a pasting.

12) Forest Whitaker ambles on. Online chatter elsewhere has speculated that he’s a Mandalorian (the same warrior race as Jango Fett, for those of you who may not know), and he might well be, although he’s clearly seen better days, judging by his hobbling gait, facial stars and what looks like mechanical apparatus of some sort on his front.

13) A group of Rebel prisoners are led away. Clearly whatever they had planned didn’t go so well. 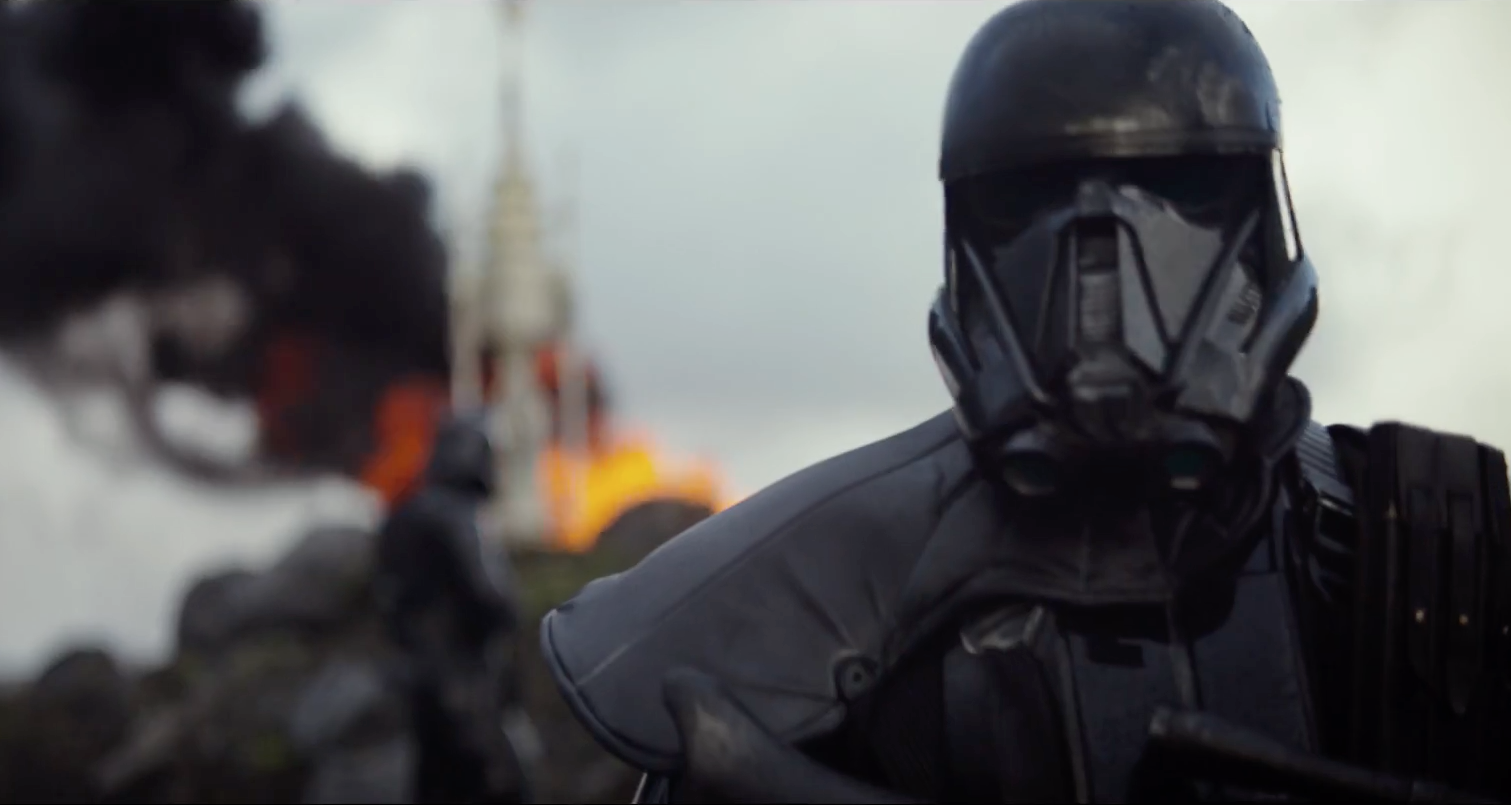 14) A whole new design of Stormtrooper shows up in the trailer. Some sort of elite guard, perhaps? 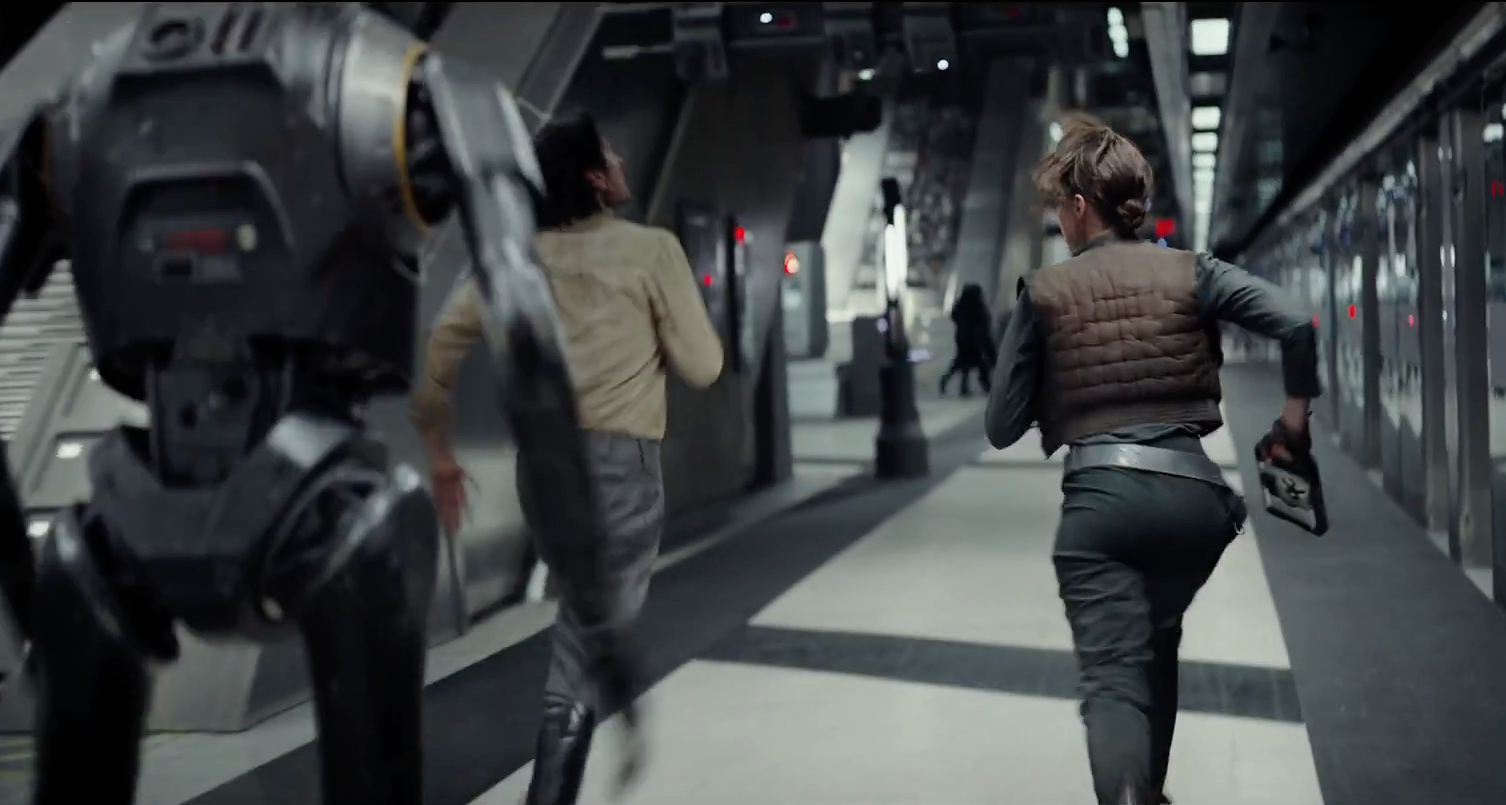 15) Jyn and Diego Luna (we’ve grown bored of writing ‘Diego Luna’s character’ leg it from a pursuing droid. Are they on board the Death Star?

16) Again possibly on board the Death Star, a group of Stormtroopers rush along – including a new, sandy version of the Scout Troopers from Return Of The Jedi. 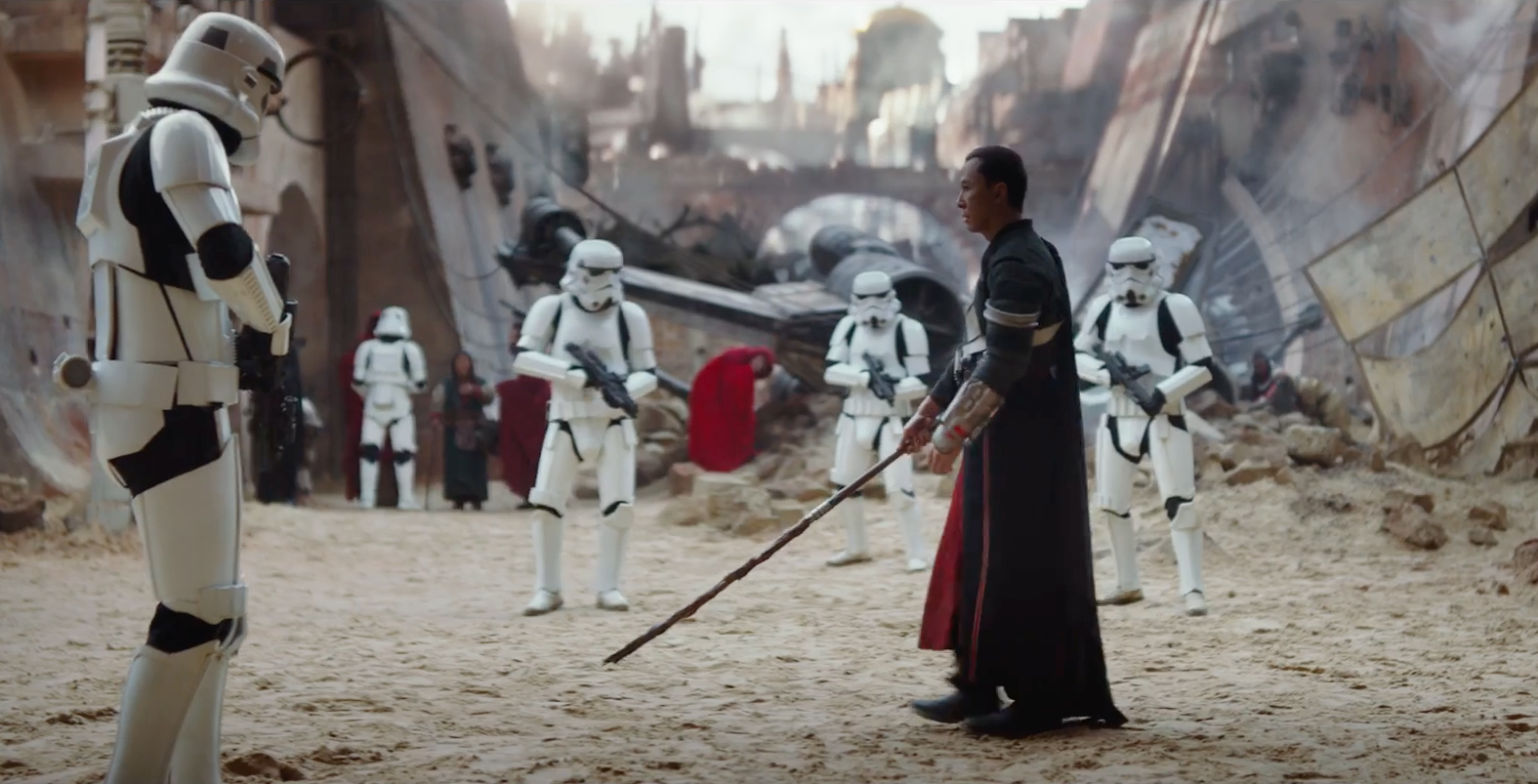 18) …Poor Stormtroopers. Not really having much luck, are they?

19) An Imperial transport gets blown up – as a result of Rebel sabotage? Again, not the real-life locations – looks like Rogue One is retaining the philosophy of The Force Awakens in this regard.

20) Flanked by Crimson guards, is this the Emperor? Looks a bit young to us, although it could well be one of his or Vader’s acolytes. 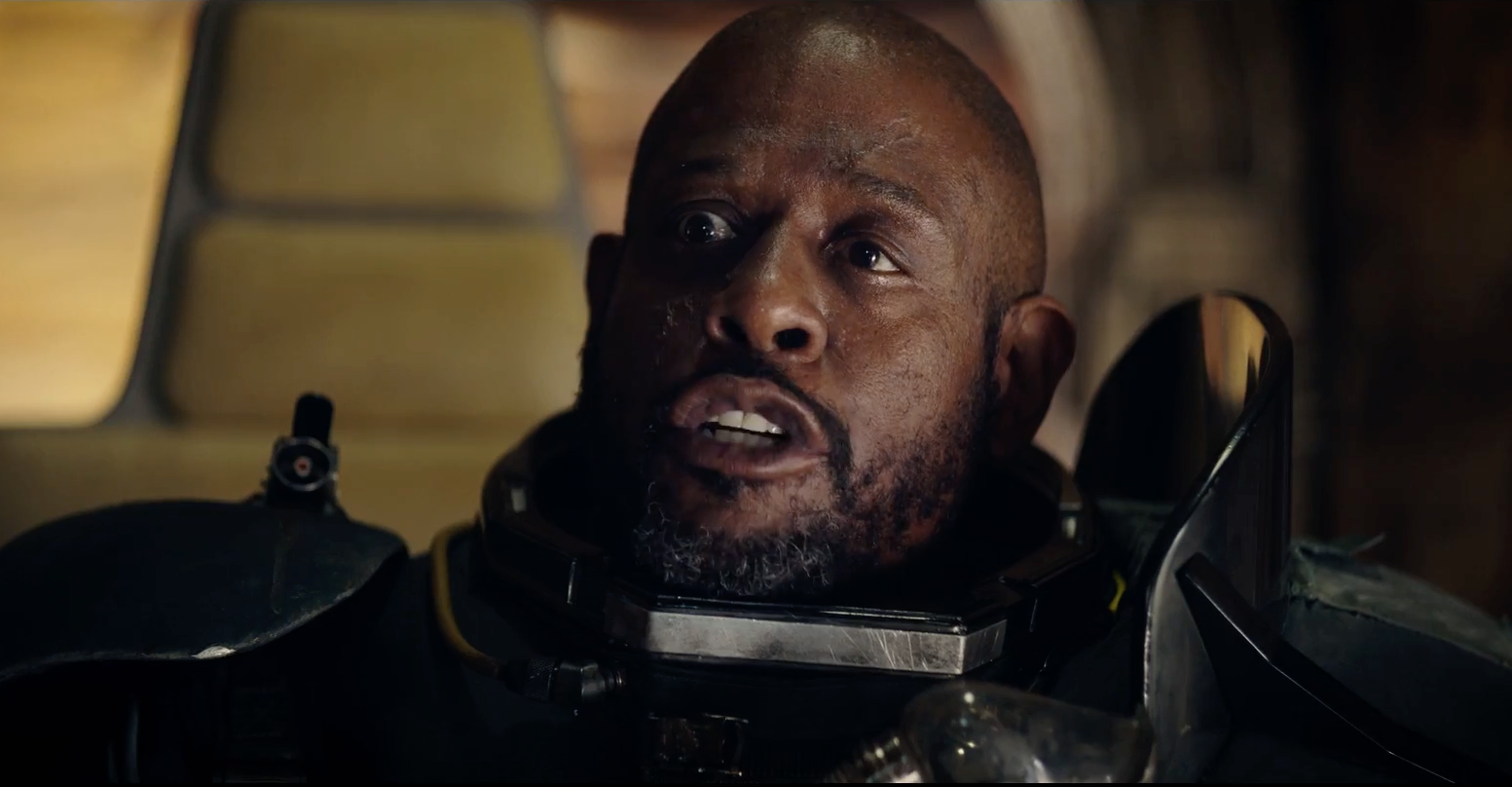 22) Ben Mendelsohn strides manfully through a landscape littered with Imperial debris and bodies. Something tells us he’s going to have one hell of a screen presence.

23) Wen Jiang’s Rebel runs forward, dodging blasterfire while returning blasts of his own. Again, he looks like a formidable proposition. 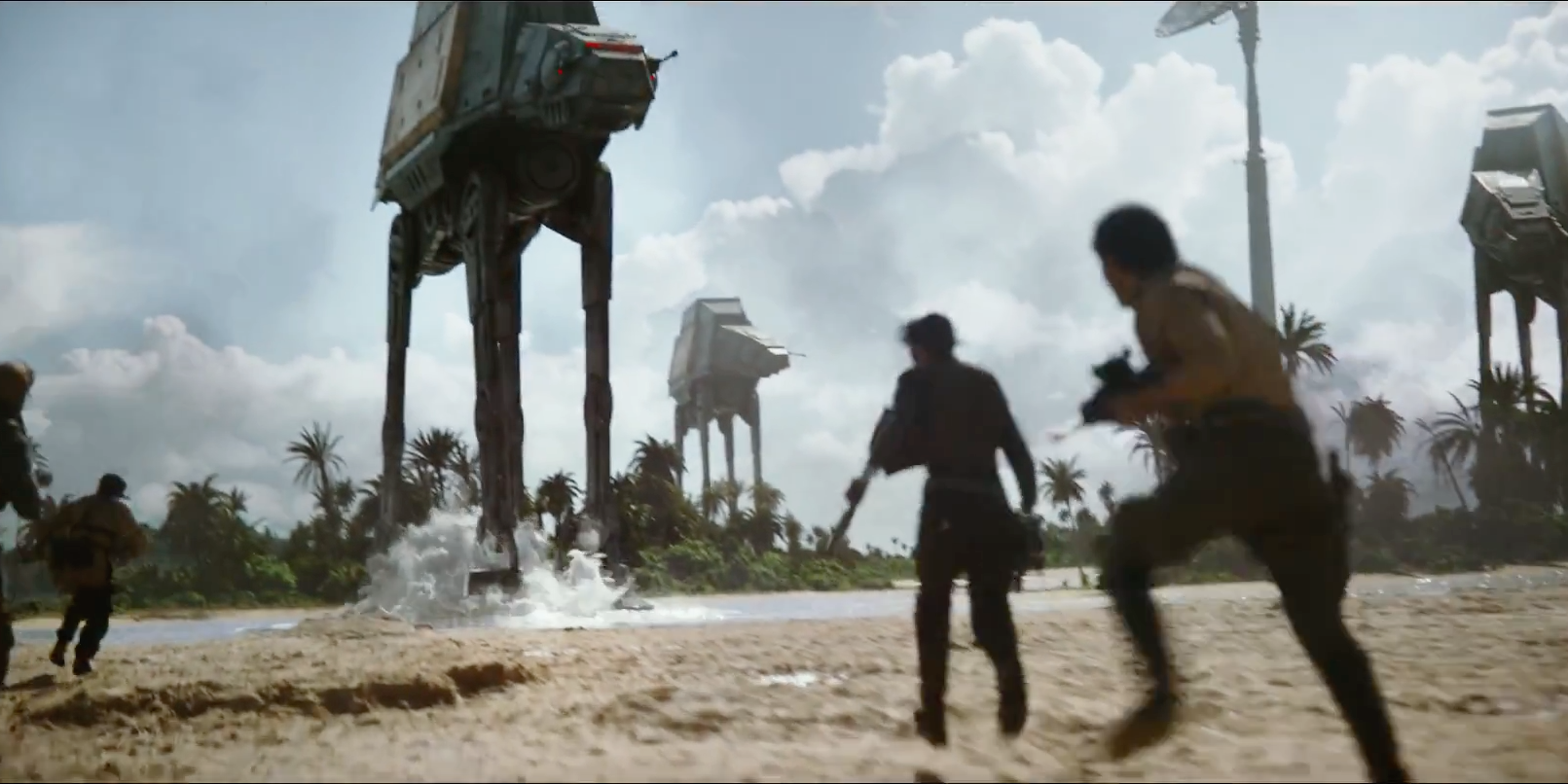 24) Jyn (or at least someone who looks like Jyn) charges headlong into a group of firing AT-ATs. Yep, we can totally see what Mon Mothma meant when she said “reckless”.

25) Jyn suited and booted, on board what has to be the Death Star. That’s all folks!

Rogue One: A Star Wars Story will be released in cinemas on 16 December 2016. You can download our Star Wars: The Original Trilogy and Star Wars: Expanded UniverseComplete Manuals from GreatDigitalMags.com. For more news about the biggest movies, pick up the new issue of SciFiNow.