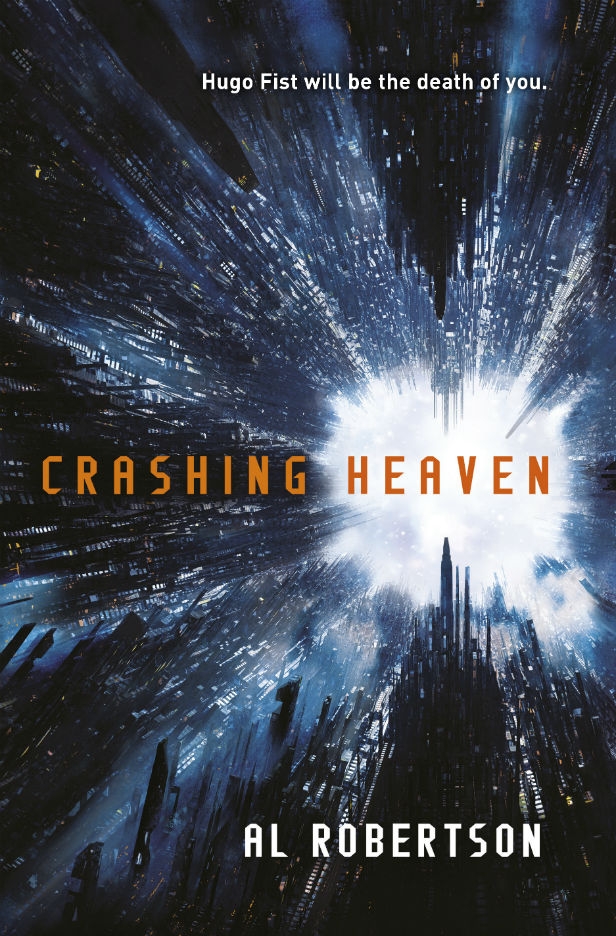 Crashing Heaven is a science fiction book. But when I started writing it, I thought I was working on a fantasy novel. And now that I’ve finished it, I think of it as a piece of realist fiction. Which is rather contradictory! But I think those three genres work rather well together, even though – on the face of it – they tell very different stories in very different kinds of ways.

So, first of all, what makes Crashing Heaven science fiction? Well, it’s set seven hundred years in the future, most of its action happens on a giant space station orbiting the Earth, many of its characters are artificial intelligences of one kind or another and everyone in it lives within a fully pervasive artificial reality – the weave. Oh, and its two main characters are auditor turned space warrior Jack Forster and his sidekick, Hugo Fist, a combat AI that manifests as a virtual ventriloquist’s dummy.

But it’s not just the far-future setting that makes it an SF book. For me, science fiction exists to think about the social and personal impact of new technologies. It looks at today from the point of view of tomorrow. That’s very much what I wanted to do with Crashing Heaven – to think about what our own deep immersion in new media, ever more intrusive branding and our own developing artificial intelligences might mean for us all.

Pondering all that set me thinking how it’s getting easier and easier to live within fantasised versions of the real world. Online media carefully edits the content we see, creating ever more exclusive filter bubbles for each of us. The companies we buy from do the same thing, surrounding us with branding that flatters us and us only. The web itself is a consensual hallucination, a vast fantasy world that has become real because we all agree that it should be.

As I plotted Crashing Heaven, I thought a lot about all those fantasies. I started to wonder how the staples of fantasy fiction – meddling gods, magical helpers, strange new races and so on – could be used to talk about them. They mapped onto science fiction surprisingly easy.

The gods of fantasy became the corporate entities that surround us. They’re creatures of great power that sit above society, setting aspirations for us and defining the shape of our everyday lives. Magical helpers became the technological tools that help us manage the virtual world. And the strange new races became the people we meet online – new tribes presenting themselves in often very alien ways, with new lore for us to learn and new customs for us to navigate.

I dropped all this into the world of Crashing Heaven. Jack and Hugo live in a world dominated by the sentient corporations of the Pantheon – they manifest and are worshipped as gods. Hugo is Jack’s familiar, giving him occult power over the technologies that surround him. And Jack and Hugo are aided by the rogue AIs of the Totality, a new race of intelligences from the outer edges of the Solar System.

And so I ended up thinking of Crashing Heaven as a fantasy novel as much as a science fiction one. It’s the story of a man who’s on a quest to find out why the gods are persecuting him and do something about it, along the way restoring justice to a broken land.

So that’s how Crashing Heaven is both a science fiction novel and a fantasy one. But a piece of realist fiction? Given what happens in it, that seems like (to say the least) a bit of a stretch. But almost everything that happens in it is rooted in lived experience of modern life. It’s realist not because it’s literally true, but because it’s a mirror held up to modernity.

And, come to think of it, you could say that pretty much every piece of fiction ever written – no matter how outrageously inventive or completely crazy – is actually entirely realistic. That’s because it comes out of its writer’s lived experience of the world, so wherever it ends up it’s always got to start with someone sitting in the reality we all share, looking around at and working out what interesting things he or she can say about it all.

In short, whatever else we are, at heart we’re all always realists too!

Crashing Heaven by Al Robertson is available today in hardback from Gollancz. You can buy it for £16.59 at Amazon.co.uk. Keep up with the latest genre news with the new issue of SciFiNow.