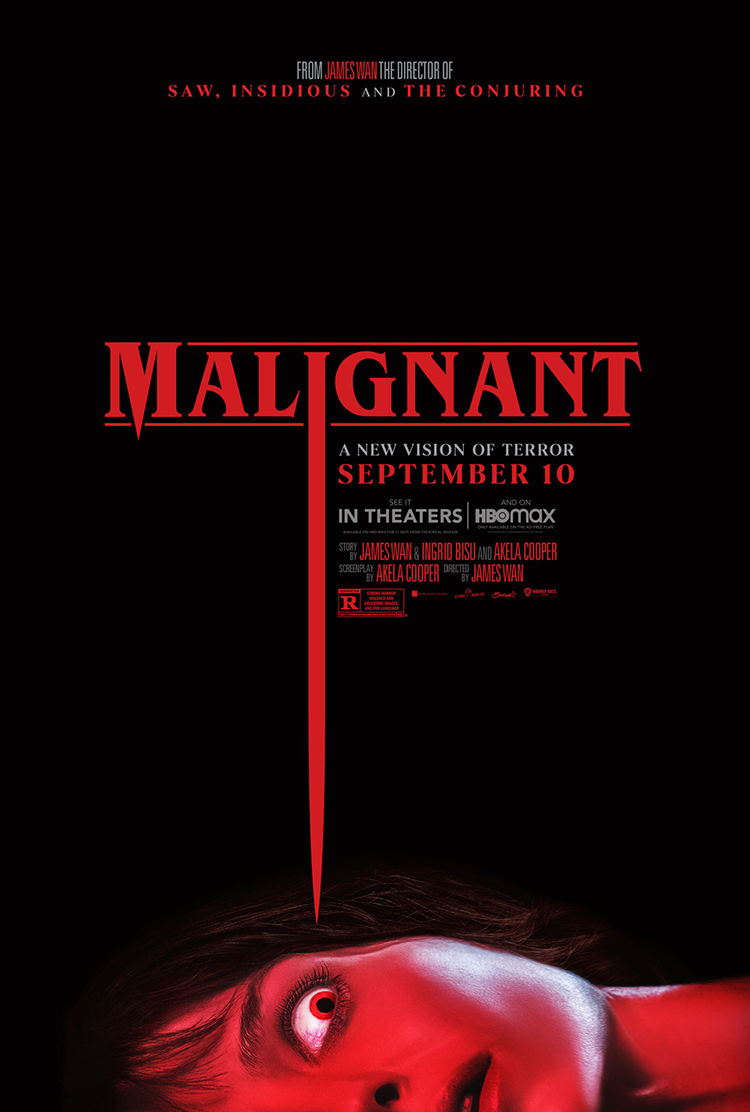 James Wan has always been one to push boundaries in genre (just take a look at Saw and The Conjuring to see how lovingly he subverts expectations) but following his recent stint as an action blockbuster director with Aquaman and a Fast And Furious movie, Malignant sees Wan back playing in his favourite sandbox, horror.

Following the death of her abusive husband during a suspicious home invasion, Madison Mitchell (Annabelle Wallis) returns alone to a creepy house where she is plagued by nightmarish visions of brutal murders. As the hallucinations turn to premonitions, local detectives Kekoa Shaw (George Young) and Regina Moss (Michole Briana White) start to take an interest in them. Together with Madison’s estranged sister Syndey (Maddie Hasson), the wannabe scooby-gang must slowly unravel Madison’s tortured past in the hunt for a suspected supernatural killer…

Right from the start, Malignant is wonderfully absurd. Opening with shaky-cam style found footage from a medical research facility where we watch as a wild-eyed scientist proclaims ‘it’s time to cut out the cancer!’ just as guards brandishing tranquilizer guns are tossed across the screen, it’s clear to see that this is a movie that isn’t taking things too seriously. However, setting such a liberally hokey tone is what makes Malignant so enjoyable.

Wan’s skill and confidence as a director gives validity to what could have otherwise been a very unbalanced, throwaway b-movie. His eye for putting the camera in usual places to create striking and iconic visuals (an interest he discusses in the Blu-ray’s behind-the-scenes featurette) cajoles you into leaving common sense at the door. The cast’s passionately committed performances also reward the audience with a sense of trust that they will hold your hand through the insanity of the refreshingly original story, just tightly enough to let you enjoy the thrill of the experience.

Conjuring up the feelings of a late Nineties/early Noughties throwback to post-modern slasher horrors, Malignant is self-aware without resorting to the usual meta-cynicism. It knows the premise is a little wild, but it’s never embarrassed by it. Instead, Wan and the cast seem to relish the challenge of making the absurd seems terrifying – walking that tonal tightrope with gleeful confidence. The film is packed with enough viscerally impactful body-horror and jump-scares, that the cheesy one-liners, clunky exposition and explosive action sequences actually help to remind you why horror movies can be fun!

Malignant is on Digital Download now and available on Blu-ray™ and DVD on 27 December. Read our interview with director James Wan here.