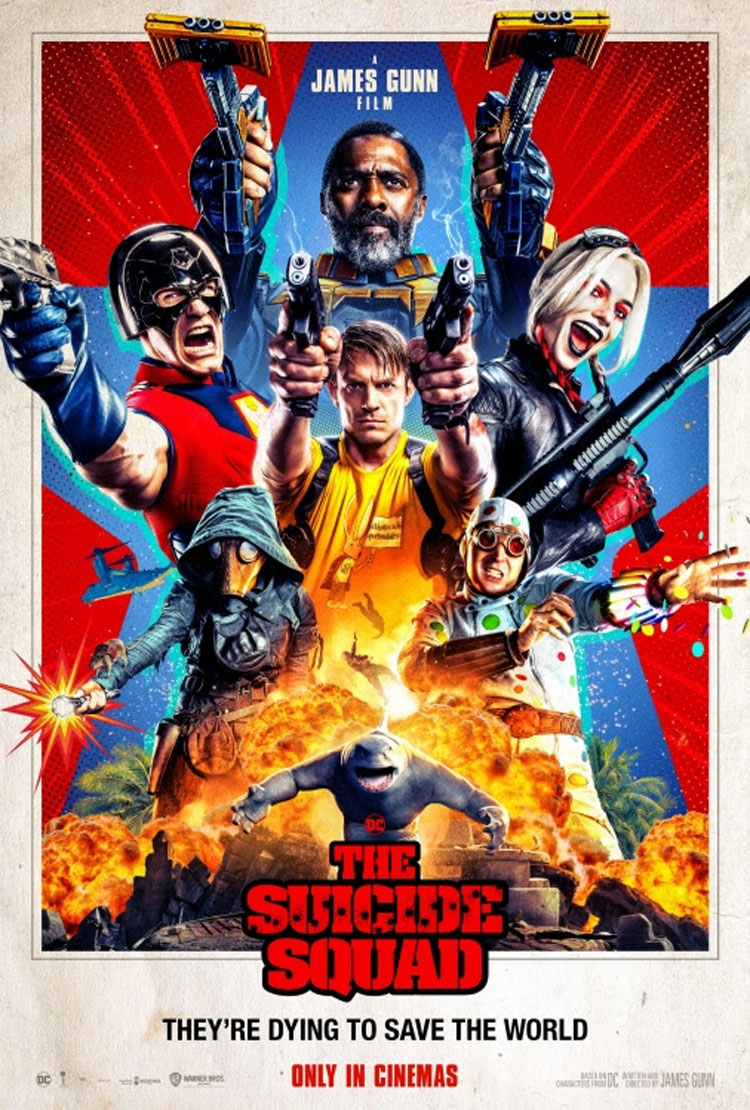 We’re not going to dwell too much on Suicide Squad, David Ayer’s 2016 movie about a bunch of super criminals forced (via a chip implanted in their heads that can kill them at the touch of a button) to work for a covert US government faction known as A.R.G.U.S in return for time off their sentence.

That’s because James Gunn’s sequel, The Suicide Squad is at a whole new level to the 2016 movie. It even has a confidently brazen ‘the’ in the title…

The world is in danger. Again. It’s been discovered that an island off South America houses a secret lab led by an evil scientist known as ‘The Thinker’ (Peter Capaldi) who’s been experimenting on an alien that could control the world.

To combat the potential threat, a whole new Suicide Squad is put together, comprising sharp-shooting hitman Bloodsport (Idris Elba); the overly patriotic Peacemaker (John Cena); Ratcatcher 2 (Daniela Melchior), who controls rats; King Shark (voiced by Sylvester Stallone, who seems to be having a great time playing the vicious but dumb giant); and Polka Dot Man (David Dastmalchian), who has… erm polka dots. There are plenty of other new insane squad members to become obsessed with too (Weasel is a particular favourite).

Speaking of insane, what really works for The Suicide Squad over its predecessor is that Gunn truly gets the craziness of this concept and then adds on a dose of bonkers for good measure. Instead of dwelling on trying to make his bad guys good, Gunn leans into their psychotic tendencies and mixes them all together to create a cocktail of crazy that will shock and delight audiences.

He’s also taken some of the best elements from Ayer’s film – Margot Robbie as Harley Quinn, and Viola Davis as A.R.G.U.S head honcho Amanda Wallace – and uses them to their full potential. Robbie is all sweetness and bloody rage, with violently beautiful fight scenes framed by cartoon-like flowers that look like they just emanate from her.

Meanwhile, the arguable real villain of the movie, Davis, doesn’t so much as toe the line, but gleefully uses it to beat her workers into submission. Wonderfully, for this outing, Wallace is put primarily into a humdrum office setting (complete with office pools and politics), which just highlights her sociopathic tendencies with comedic effect.

That’s not to say the newcomers aren’t just as wonderful or sociopathic. Elba plays the lovably gruff Bloodsport to grumbling perfection while Cena plays the complete arse that is Peacemaker with expert comic timing. The added bonus that the two have similar abilities, which leads to a bickering rivalry (resulting in a competition on the most elaborate way to kill people), produces some of the movie’s funniest moments.

Having both written and directed The Suicide Squad, Gunn clearly had an idea of what the Suicide Squad should be, and happily we agree. With an eclectic soundtrack (which sounds like someone pressed ‘shuffle’ on the entirety of Spotify), spectacular – and very detailed – murder scenes, along with surprisingly emotional backstory flashbacks, it’s like someone gave Gunn a box of filmmaking goodies to play with and he’s chosen to use all of them. Though the stylish slow-mo might feel a bit worn by the final third of the movie, you won’t care much because you’ll be having so much fun.

The Suicide Squad is out in cinema on 30 July from Warner Bros.