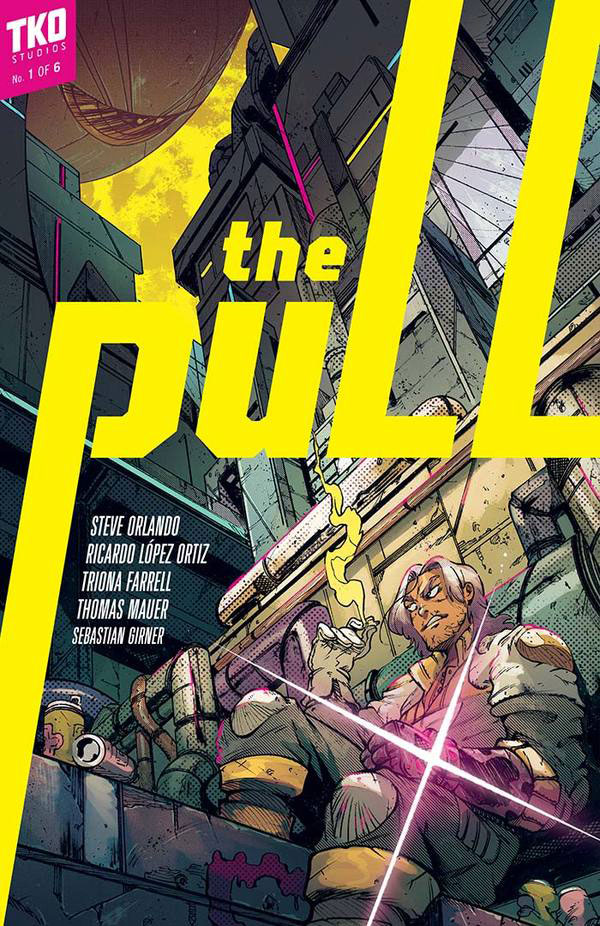 Set in the far distant future, The Pull shows an Earth that has evolved. Thanks to superior scientific capability, we have discovered a unifying force that flows through everything, and at the centre of the Earth’s core, a new material, Marbelite, has also been found, which just so happens to be able to influence and control that unifying force.

Doing what humans do best, the discovery is quickly weaponised. Soon 13 peacekeeper officers are given absolute jurisdiction to wield the power of Earth’s energy as Hard Heat and are imbued with a prosthetic hand made of Marbelite (think Jedi, but with glowing pink hands instead of lightsabres) to do so.

Unfortunately, abiding by Newton’s third law of motion, as the peacekeeping officers start to use (and abuse) their power, there is an equal and opposite reaction at the far end of the universe. A new force is being attracted towards the Earth, intent on rebalancing the scales of power. This is the Undoer and it arrives in six days.

With the countdown to Earth’s demise firmly switched on, it’s up to disgraced officer Brenton Demm and genius scientist, Gayano Tith, to embark on a last-ditch mission to prevent the end of the world…

Pairing a Watchmen-esque doomsday clock style framing device with the explosive warnings of Akira’s studies on humanity’s manipulation of (un)natural forces, Steve Orlando’s story is a wonderfully original work of science fiction that borrows from the greats to deliver a terrifying and sobering message. Ricardo López Ortiz’s art makes for an interesting counterpoint, then, for such a weighty story, providing non-stop explosive action on every page; drawing the characters in beautifully chaotic overexaggerated poses in expressions of raw power and emotion. Triona Farrell’s colour work rounds out the creative vision, with a tightly controlled palette that helps to unify each page and chapter.

Told as a complete story across six chapters, The Pull’s relentless onslaught on the senses perfectly embodies the desperation felt during the last days of Earth. While some panels and story threads teeter close to oversaturation, it all adds to the confusion in the chaos that provides the agency for the story. Like other works published by TKO Studios, The Pull is a refreshingly unique and exciting showcase of passionate storytelling and wild art that deserves to be devoured and discussed.

The Pull is out now from TKO Studios.

Batman: The Last Knight On Earth review: This is the end
< Previous
Next >