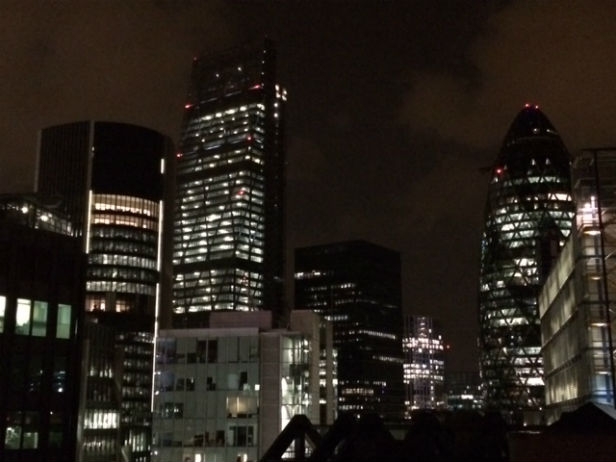 Three rules to follow when designing a nightmarish skyscraper for a drowned, dystopian London

My new novel, Steeple, is coming out in June from Gollancz. Set in the ruin of a future Britain, it tells the story of main characters, Fatty and Kenstibec, as they fight their way up the rotting hulk of a vast, impossible skyscraper – the ‘Hope Tower’.

In the book the Hope Tower overlooks the flooded ruins of London – so when putting together my design it’s only natural that I should have sought inspiration from that city’s own efforts at high-rise construction.

I love London, and I love a number of its towers: the Gherkin, One Kemble Street (“Space House”), and the view of Canary Wharf as you approach the Blackwall Tunnel from the south. I even love BT Tower – my Dad used to live nearby, and I have a lingering affection for the quiet Fitzrovian streets from which it protrudes.

Still, there’s no doubt that London has a chequered history with its towers, providing plenty of inspiration for the dystopian author. Presented here then are three rules I followed when putting together my design, as inspired by the city I love. 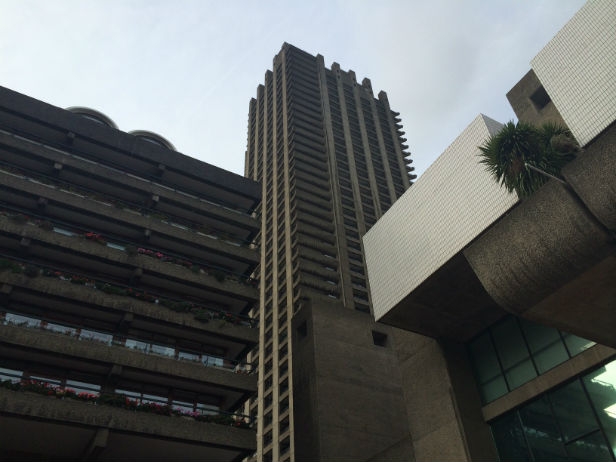 The Hope Tower had to be ugly. London is a world-leading showcase of the grim stalk and the artless lump.

Architects in London seem determined to amplify a design’s ugliness – often by siting it in isolation, overwhelming its neighbourhood as much as possible. St George’s Wharf Tower single handedly blights an entire river, sitting on the Thames with the grace of a forgotten traffic cone. Strata is the cap of a cheap biro, stabbed into Elephant and Castle. I love Barbican, but its three towers are every bit as forbidding as the name suggests.

In The City, towers are forced together. That leads architects to drape their structures in loud clothes, attempting to stand out from the crowd but only succeeding in making the crowd ridiculous. Those designs are inspired more by the need for catchy branding (helter-skelter, walkie-talkie, can of spam) than any consideration for their surroundings. The overall effect is of leftover Lego bits that will never form a satisfying whole.

Other structures seem to have been designed to be aggressively unsightly. 102 Petty France looks like it wants to thump its neighbours. The Montcalm Signature Tower looks like an ocean liner crashing through the city toward Old Street. New Scotland Yard presses at you like a riot shield. 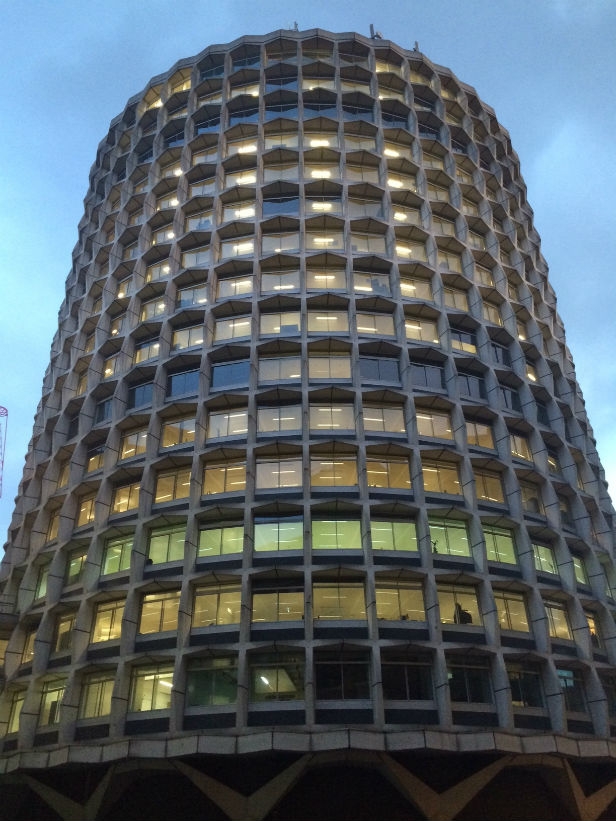 The Hope Tower also had to be a botch job, to reflect London’s long and continuing history of quality issues with its tall buildings.

Many of our towers have experienced serious construction problems: ranging from tragic episodes like the collapse of Ronan Point, to the amusing: as when the curved surface of the Walkie Talkie created a “death ray” sun reflection, melting an unsuspecting banker’s Jag.

We just don’t seem to be able to build these things very well. Bolts drop off the Leadenhall Building. The turbines on Strata don’t work. Colliers Wood Tower reaches three storeys before they realise they’ve screwed up and have to pull it down and start all over again.

The Hope Tower is inspired by these mighty failures, a project that is dogged by thieving contractors, worker strikes and changing specifications. It is a Millenium Dome of a project, but without the possibility of redemption. For Kenstibec, a former member of a superhuman race, the Hope Tower is a symbol of everything that is faulty with people. 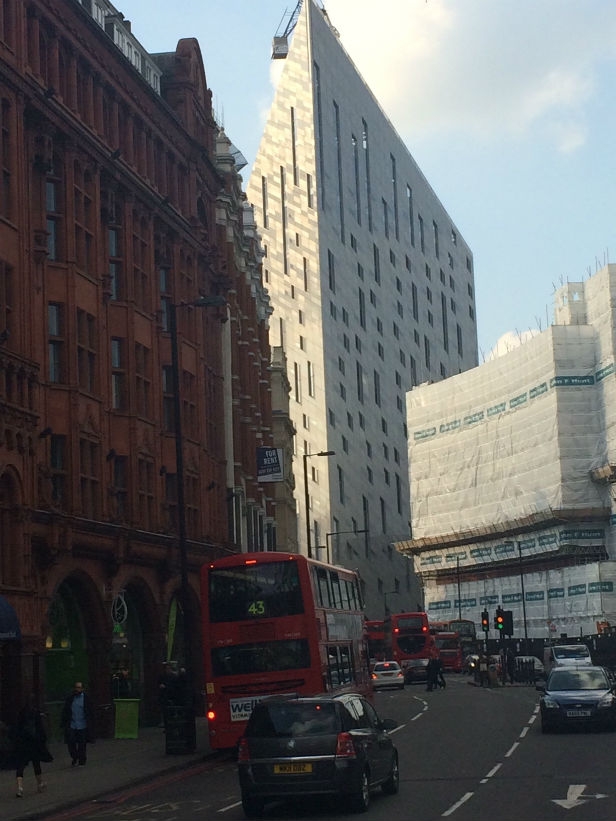 Towers in London of course have a long association with class. During the 60s and 70s high rise construction was often associated with poverty – cheap social housing for people blown out of their homes by Luftwaffe bombs and V weapons. Projects like the Trellick Tower became associated with crime, concrete voids and squalid conditions.

Now it seems that residential towers have taken on a different character – ‘luxury’ apartment blocks sprout everywhere, each madly unaffordable, bought and sold by some hidden species. There are currently over 250 tall buildings in development.

Sometimes I think the new generation of towers are nothing to worry about, just another layer in London’s long history of rot and regeneration. But other times it seems more sinister, a symptom of a tired old city being scrubbed up, excavated and whitewashed into a kind of vast safety deposit box for some faceless, international oligarchy.

In Steeple the Hope Tower is a refuge for this unseen ruling class. It is a gratuitous statement of wealth, rising 1000 storeys tall. Think that’s unlikely? Behold.

Fortunately there are characters in the book who aren’t so keen on surrendering their city quite so easily. There’s a fight on in the tower, a dog eat dog struggle between the bottom and the top. And Kenstibec and Fatty must choose a side. 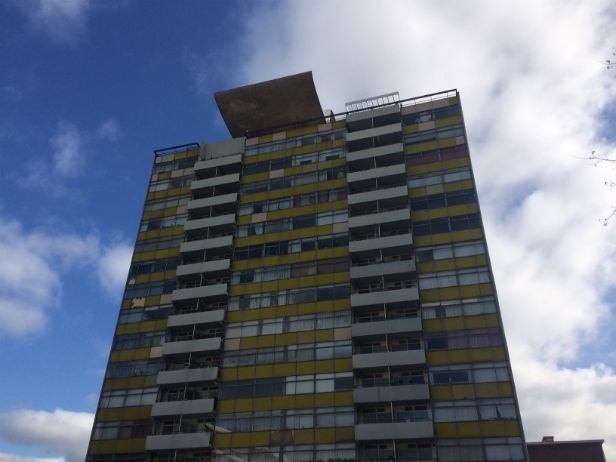 Jon Wallace is the author of Steeple, available on 18 June from Gollancz.

Kenstibec was a Ficial: an invulnerable, emotionless life form. He was designed to build a better world for humanity, but that didn’t work out.  The war between people and the Ficials laid waste to his country and, worse, left him mortal as any man. Now, living secretly among his sworn enemy, he sets out on a mission to reclaim his Ficial strength. All he has to do is climb the battered remnant of a huge, impossible skyscraper that looms over the ruins of London. It’s going to be another long journey—chased by cannibals and attack drones, through crawlspaces and lift shafts, up the crumbling edifice of man’s last great monument to greed.

You can buy Steeple at Amazon.co.uk. Keep up with the latest genre news with the new issue of SciFiNow.