Here’s a book cover reveal for you, with a title that might feel a little close to home, given current world events… presenting Eye of the Sh*t Storm!

Out in April 2021, Eye of the Sh*t Storm is the third high-adrenaline novel in Jackson Ford’s Frost Files series. Jackson revealed himself to be the rather lovely Rob Boffard in an exclusive interview with us earlier this year, and the first book in his Frost Files series is The Girl Who Could Move Sh*t With her Mind.

This novel follows the adventures of…  you’ve guessed it… a girl who can move sh*t with her mind. Specifically, she’s called Teagan Frost, and she reluctantly puts her telekinetic powers to work as a government agent in Los Angeles, even if she’d rather just be kicking back with a beer. When she gets accused of a crime she didn’t commit, the ensuing adventure is a high-octane tale described by The Fantasy Inn as ‘a modern action movie that just happens to be in book form’.

The series continues with the imaginatively titled Random Sh*t Flying Through the Air (released in July 2020). And in the upcoming book, Eye of the Sh*t Storm, Teagan has to deal with a creepy kid with the ability to harness electrical power and wield it in freaky ways:

Teagan Frost might be getting better at moving sh*t with her mind – but her job working as a telekinetic government operative only ever seems to get harder. That’s not even talking about her car-crash of a love life . . .

And things are about to get even tougher. No sooner has Teagan chased off one psychotic kid hell-bent on trashing the whole West Coast, but now she has to contend with another supernatural being who can harness devastating electrical power. And if Teagan can’t stop him, the whole of Los Angeles will be facing the sh*tstorm of the century…

Eye of the Sh*t Storm will release in April 2021. Check out all the covers in the series so far below, and follow Jackson Ford on Twitter @realjacksonford 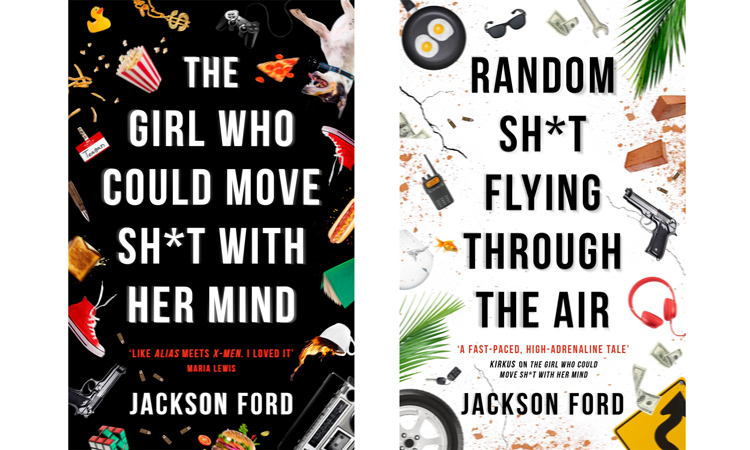