What happens when you take a sneak peek at the email exchange between two titans of genre? Well read on to find out…

To celebrate this year’s releases of two extraordinary novels: Joe Abercrombie’s (pictured above, right) The Trouble With Peace and Andrzej Sapkowski’s (pictured above, left) The Tower of Fools we gave the two authors the chance to flip the tables and ask each other questions about their novels.

First up, Joe Abercrombie puts Andrzej Sapkowski under the spotlight…

Joe Abercrombie: The Hussite wars is a period that people in the west probably know little about – what made you choose it as a setting, and was there a difference writing in the real world rather than an invented one?

Andrzej Sapkowski: People from my part of Europe don’t know much about the Hussite Wars either. Of course, the Czechs are the exception here, since the Hussite movement is an important episode in their history. Did you know, for example, that during the Battle of Britain the aeroplanes of the Czechoslovak RAF Squadron had crossed flails – the signature Hussite weapon – painted on them?

But getting back to the point – it’s precisely because the Hussite Wars hadn’t been overused that inspired me to take them up. Further, I chose the period because it seemed to me turbulent and complex. And fascinating at the same time, in the way that it marked out the ground for Europe’s later fate. The Czech “heresy” was the only one – before Martin Luther – not to be crushed by Rome. Without Huss there would have been no Luther. And the slogan sola scriptura (“only the Bible is infallible”) affirmed by Luther came from the Hussites. And without Luther the Reformation wouldn’t have happened. If the Reformation hadn’t happened there wouldn’t have been an Industrial Revolution. We’d still be living in wattle and daub huts, praying.

JA:  I’m always intimidated by the thought of setting stories in the real word, and the responsibility to get shit right. Authenticity really bleeds off the pages of this book in the way it does with the best historical fiction – the details of life, the vagaries of the Catholic church, the Latin asides – but also the alien mindset of people of the time.

AS: I was in my 50s when I started work on The Tower of Fools, so I was no youngster. I had some education and life experience and I’d read plenty of books, many about medieval history. But in any case, I had to devote a great deal of effort to searching for and gathering material. There wasn’t that much of it and it wasn’t easy to get my hands on some of it.

I received enormous help from Jiří Pilch, my Czech publisher and Standa Komárek, my Czech translator. I somehow coped and the books were written, but I still had to fend off sniffy historians repeating: “No, it wasn’t like that, Sapkowski’s wrong, there are historical inaccuracies”, “he’s exaggerating there”, “he’s downgrading the role of…” etc. They simply wouldn’t acknowledge my right to poetic licence. That’s got to be the worst thing about writing in the real world. There’s always some wise-ass who finds fault. You couldn’t do that with the Witcher books.

JA: Reynevan’s an unusual character for a fantasy hero – less mighty warrior on a grand quest than a self–obsessed, accident-prone romantic, fated to cross paths with vivid and powerful figures. He reminds me a little of Jack Vance’s Cugel the Clever, following his nose and leaving an incidental trail of destruction wherever he goes.

Why did you settle on that kind of central character? Or did he just take that shape as you went?

AS: You know what, after twenty years, I could look for analogies between Reynevan and your Leo dan Brock; toutes proportions gardées.

When I was inventing Reynevan I had in mind someone in the anti-hero mould, somebody who falls outside fantasy clichés; so he isn’t a mighty warrior in the Conan or Lancelot or Aragorn style. Simply: I thought about creating a character that had never – or at most rarely – made an appearance in fantasy before. Someone like Cugel the Clever – but actually not that clever. Perhaps, at some level, the naïve Perceval.

The foil for the simpleton Reynevan is Scharley – a typical pícaro from a picaresque novel. The two characters – I stress – are only there to serve the storyline. 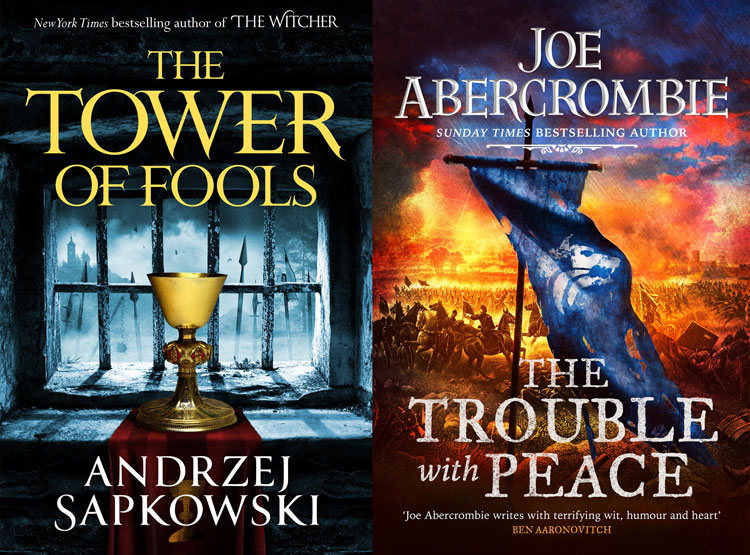 JA: The sense of social upheaval, bubbling rage and a world turned upside down in Tower of Fools feels very current, so I was surprised to learn this is a book you wrote nearly twenty years ago, and is just now being translated. Is it strange seeing this work hit a new audience now, so long after it was first written? Have your feelings on it changed?

AS: It appears that I’ve either got prophetic gifts or this bloody world changes very little. Our world is like a rotten actor – it plays the same role over and over; it just changes costumes. The Tower of Fools was published eighteen years ago, in 2002. Then Warriors of God in 2004 and Light Perpetual in 2006.

JA: A question you’re no doubt thoroughly bored of, but a lot of people in the US and UK know your work through the Witcher games, and now of course the Netflix series. Is it a constant delight to see your ideas brought to life in these other media? Or is it more like seeing them put to death…?

AS: All of the above and none of the above. Every proposition and offer for a potential adaptation to another medium starts off exciting: great, they’re interested, nice, they appreciate me, my work must be good if they’re interested, cool, I’ll make some money out of this, perhaps I’ll be able to buy a new car… But then the thought often comes – why did I even bother?

Now, if you don’t mind, it’s my turn to ask you a few questions. People usually interview me, and I hardly ever ask anyone questions. So I might feel a bit ‘on stranger tides’ and might go off course. For which I request forgiveness…

Wait right there! You’ll have to wait until Part Two to find out whether Joe Abercrombie buckles under the questions from Andrzej Sapkowski. Part Two will be published tomorrow at 9am right here at SciFiNow.

The Trouble With Peace by Joe Abercrombie is out now from Gollancz in the UK here and Orbit in the US here.

The Tower of Fools by Andrzej Sapkowski is out now from Gollancz in the UK here and Orbit in the US here.