After a messy break-up, Andy (Vincent Van Horn) has decided to pick up sticks and move from Austin to Los Angeles. Though he’s initially lonely, Andy soon befriends the unusual ride-share driver Roger (Michael Lee Joplin) and starts a relationship with the beautiful Sam (Christine Ko). However, his #freshstart (his words not ours) soon takes a turn for the terrifying as Roger starts to get jealous of Andy’s burgeoning relationship.

Written and co-directed by Tyler Savage, Blinders is a modern stalker thriller complete with the trappings of new technology and a suffocating atmosphere as Roger’s obsession and malevolence steadily increases. We sat down with Tyler to discuss the new movie, his influences and how technology can make us vulnerable…

Where did you get the idea from for Blinders?

The initial lightbulb came from a ride-share ride a took, but the concept really came from the idea that technology makes us all vulnerable. I think if any of us look at our normal daily lives, we utilise tools that constantly compromise our privacy. I think that’s a pretty terrifying reality, so my writing partner (Dash Hawkins) and I set out to tell a story that was fun and playful while also driving home that unsettling idea.

What inspired you while co-writing the script for Blinders?

Dash and I have been writing together for years now, and I think we sort of give each other energy and inspiration. But we wrote the script with Michael and Vince in mind for the leads; and hanging out with them and thinking about how fun this Andy and Roger dynamic could be fueled my excitement. Landing the ending was also tricky from a writing standpoint, and we love a good challenge.

This felt like a very modern horror with the use of Instagram stories and FaceTime to help tell the story. Why did you decide to go down this route?

We tried to find a balance between something that felt familiar in a good way but was also inherently modern. I love using tropes and familiar elements to get an audience to drop their guard, to make them feel like they already ‘get it.’ If you’re able to do that then you can manipulate expectations, which is a cornerstone of the type of storytelling I gravitate towards. 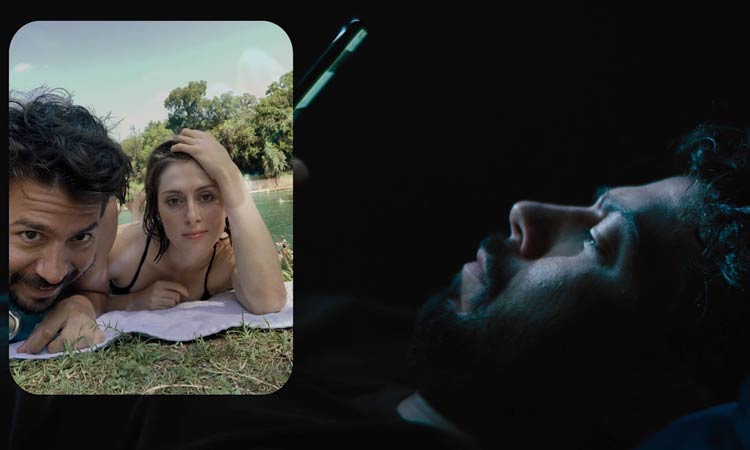 In the same vein, Roger digitally hacks into Andy’s life as part of his stalking campaign – what are your thoughts about him invading his life in this way?

Roger using technology as part of his stalking campaign (I like that term ‘stalking campaign’ BTW) was always part of the concept. We wanted to have his tactics be a combination of tech-based and social engineering. People often rationalise things, but the fact of the matter is we can all be targeted, and that’s scary.

Andy meets Roger through a ride-sharing service – why did you decide to have them meet in this way?

Why did you set the film in LA?

I’m from LA, so I have a bias, but I think LA is a city that people regularly come to for a new start. So, for Andy, it felt like a natural place for him to be moving to for his #freshstart. Also, I’ve always wanted to take my hand at shooting one of the most photographed cities in the world, and our DP Antonio and I had a lot of fun with that.

What are your horror/thriller influences?

I’ve been obsessed with film since I was a little kid, so it’s a long list! But in terms of horror and thriller, I love Cronenberg, Carpenter, DePalma, and, naturally, Hitchcock. But the tradition of film noir in general was a big influence on this one since I think stories about doomed people have a lot of potential for dark humour.

We liked how Andy knows who’s stalking him almost straight away but can’t do much about it, which added a sense of helplessness. What made you decide to go down this route?

That’s a great point. I’m not sure we ever really considered Andy having to find out who was stalking him. We wanted to get into the meat of the Roger and Andy tension quickly, so we just sort of jumped right into it since Andy has plenty of reasons to suspect Roger once things start turning on him.

This is your second feature film – what has been your experience since your first feature film Inheritance was released?

We had a tricky time getting Inheritance released in the way I was hoping for, but I’m still proud of that first effort. I’ve been juggling my day job in advertising and various writing projects, but I’m always just trying to get my next project together.

Was the process of creating a feature film easier or harder the second time around?

It was definitely easier the second time around. Even though the production was more ambitious in terms of the number of locations and cast members, I was calmer and more confident in my ability, which made it less stressful and more joyful.

It’s been my experience that most creatives or filmmakers always have to juggle a bunch of priorities, but I’m working with Dash on some exciting new thriller concepts so hopefully we’ll shoot another feature next year. I’m also working on some other projects as a co-writer that I hope to see moving into production in 2021.

Blinders has its UK premiere at Arrow Video FrightFest on 31 August.