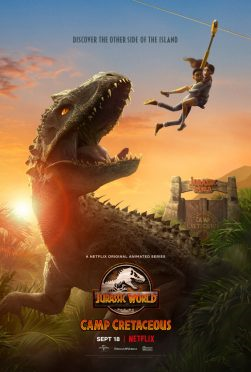 Summer camp can be an exciting time in many a young person’s life – but imagine if you could go to summer camp on an island filled with bio-engineered dinosaurs? Great, right? No kids! Of course not! Have you not watched Jurassic Park?! C’mon!

Set within the same timeline as the 2015’s Jurassic World, Jurassic World: Camp Cretaceous follows six teens chosen for a once-in-a-lifetime experience at a new adventure camp on the opposite side of Isla Nublar. They’re a real mix of characters – from privileged rich kids (Ryan Potter), to social media stars (Jenny Ortega), to dino nerd Darius (Paul-Mikél Williams) who has won his spot in a video-game competition.

However, when the dinosaurs escape (of course!) they find themselves left on their own without an adult in sight and struggling to survive.

From the terrifying Indominus Rex, to the cute Ankylosaurus friend named Bumpy, the dinosaurs in Jurassic World: Camp Cretaceous are first-rate and almost used as separate characters themselves. The sound design is also thrilling; when the Indominus roars you can feel it reverberating from your TV, and the music uses heart-pounding familiar cues from John Williams’ and Michael Giacchino’s movie scores.

Unfortunately, the human characters aren’t given quite enough time – both in terms of animation and characterisation. Their rendering isn’t as polished as we would have expected and they aren’t allowed to develop as characters, instead they’re shoehorned into familiar tropes to establish relationships. The show also spends too much time setting up the ‘main’ danger rather than getting straight into it. Instead our characters spend the first half of the season getting into various unconvincing troubles. However, when the real crisis becomes apparent, events are turned up a notch, and the teenagers are forced to go a perilous journey that delivers real threats and a few surprises.

Given a PG rating (the same the original Jurassic Park film), Jurassic World: Camp Cretaceous, isn’t nearly as scary or engaging as its movie counterparts, aiming it mainly at children. However, there are snippets of of genuine peril here and by the last episode the adrenaline is pumped up enough to warrant interest in a second series.

Jurassic World: Camp Cretaceous is out now on Netflix.

Star Wars: The Mandalorian: This is the way
< Previous
Next >

Star Wars: The Mandalorian: This is the way