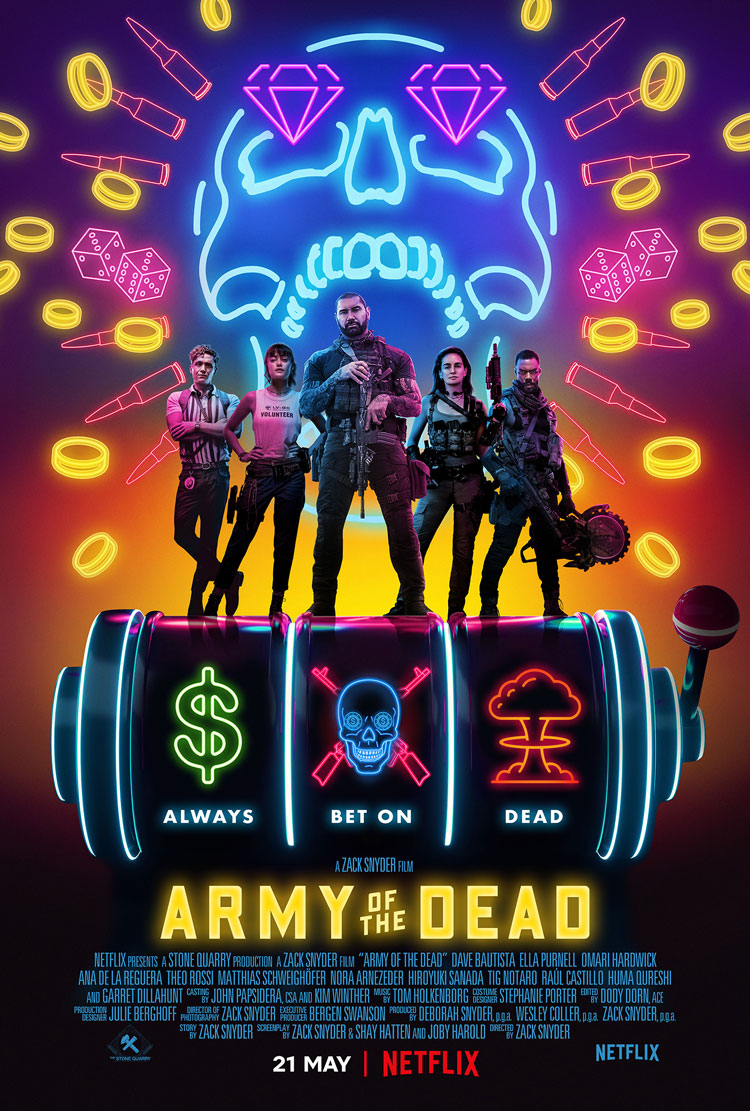 Since Zack Snyder’s debut with the action-packed remake of Dawn Of The Dead, it’d be fair to say his career has been a bit of a rollercoaster (with the DC universe occupying the last eight years). Hot off the heels of his cut of Justice League finally seeing the light of day and being met with critical and fan acclaim, the timing feels right for him to make his long-awaited return the zombie genre after 17 years with Army Of The Dead.

Dave Bautista leads the cast as Scott Ward, a former mercenary haunted by his past and estranged from his daughter Kate (Ella Purnell). However all that could change when he is offered an opportunity to pull off a heist that makes anything in the Oceans franchise seem like a cake walk: by leading a team of mercs into a zombie-ravaged Las Vegas which has been sealed off by the government following an outbreak, and extract a hefty payload of $200 million from a casino vault. Just to add to the mix, they’re also against a tight deadline before a nuke is dropped on their location.

Bautista made no secret of his trepidation stepping into another role that on paper is so action-heavy, but he does a fine job leading the line and doing the emotional heavy lifting that convinced him to take the part. Amongst all the shootouts and gore, there’s still room for some pretty comical moments too, with safe-cracker Ludwig (Matthias Schweighöfer) and helicopter pilot Marianne (Tig Notaro) being the particular scene stealers. Being able to provide balance with an ensemble cast can sometimes have its issues, and sadly in Army’s case, it tries so hard to give enough screen time to all involved that it damages the pacing as a result.

About an hour into AOTD’s runtime we’re given some insight into how these zombies are a totally different breed from the likes in Snyder’s Dawn remake. These are not just brainless running killers with an endless taste for flesh, but tribal and instinctive creatures that won’t simply let our ragtag protagonists blast their way through to get to the big cash prize

Whilst offering a variety of zombies no doubt adds an extra dimension to the scheme, it eventually becomes far too overthought; less would certainly have been more in this case (although anyone that’s watched Batman v Superman or Justice League will know that’s not really Snyder’s style). Despite its problems, the third act ramps things up and sets the stage for an all-out action-packed gore-soaked finale.

Snyder does prove that he still has the capacity to provide spectacular visuals and a kick ass, heavily Vegas-inspired soundtrack. Although we’re still torn on whether one particular Cranberries songs inclusion is either brilliant or incredibly on the nose…

Army Of The Dead might not be as slick, nor does it hit the same heights of Snyder’s Dawn remake, but it certainly feels like a revitalising experience for him. All in all, this is an unapologetically fun watch that will hopefully serve as a springboard for Snyder off the back of his DC endeavours.

Army Of The Dead is streaming now on Netflix