It’s rumoured that the previously straight-laced and reliable postal service has been infiltrated by signs of another life-form. It is not confirmed as yet just what is likely to happen in the long-term but is this a sign of things to come in the collecting world?

Kent-based, Buckingham Covers who produce limited edition stamp collectables are quoted as saying: “This is fantastic news, we can finally show off our work to another species of collector.” 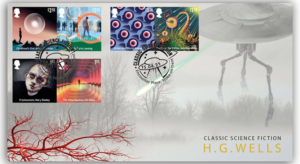 This strange remark does seem suspicious and given an eyewitness account claims that ‘strange machines, monstrous tripods with ropes of steel and long flexible glittering tentacles’ were seen very close to the Buckingham Covers office it’s possible that staff may have already been probed. Another witness described ‘sluggard creatures’ at the scene but we have yet to confirm if this was an alien life-form or just the staff leaving. More on this as we get it.

What we can report is that a stunning, limited edition collector’s pack has just been released. It appears to celebrate the genius of Britain’s sci-fi writer HG Wells who dwells locally in Sandgate, Kent. The writer is rumoured to have a ‘Time Machine’ as he prophesized a ‘War of the Worlds’ very similar to recent events. 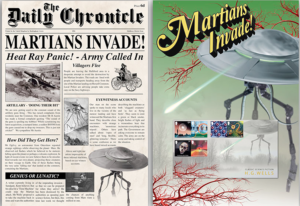 The previously mentioned collector’s pack is perfect for any science fiction fan and includes a special first-day cover which features the full-set of Royal Mail Classic Science Fiction stamps among other ‘interesting’ items. More evidence of an infiltrated postal service, as you can see.

These interesting items include a poster, newspaper reproduction and a stamps collectable which can be perfectly mounted onto the poster. All elements come bound in a ‘Top Secret’ folder to avoid this classified information reaching the wrong hands in these troubling times.

This Collector’s Edition is limited to just 200 and is sure to be popular. For further information it is advised you visit www.buckinghamcovers.com/scifinow