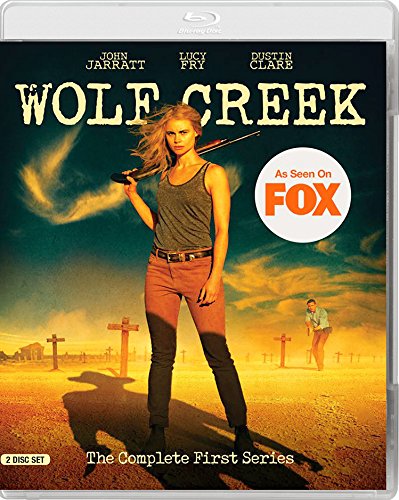 Spinning Wolf Creek’s cackling Outback serial killer Mick Taylor (John Jarratt) into a TV series might have seemed like a step too far for Greg Mclean’s nightmarish creation, but Mclean and Underbelly veterans Peter Gawler and Felicity Packard take a step back from the high-octane thrills of the sequel, crafting a slow-burn thriller that keeps the sly social commentary and gory shocks.

19-year-old Omaha native Eve Thorogood (Lucy Fry) is on holiday with her family when they come across Mick, who murders her mother, father and little brother before leaving her for dead. When she recovers, Eve decides to set out into the wilderness to track this monster down and stop him for good. But what’s Mick going to do when he realises he’s being followed?

The focus here is very much on Eve and her journey through an unforgiving landscape, while Mick pops up a few times every episode to brutally murder some unfortunate tourists. In keeping with the films, Wolf Creek the series is beautifully shot (Tony Tilse does an excellent job directing 5 of the 6 episodes, while Mclean steps in for the finale) but paints a bleak picture.

With the exception of Dustin Clare’s good-hearted detective, the police are incapable of helping, while most of the Aussies that Eve comes across are violent, aggressive, or, at best, disinterested. People who actually help her (Jack Charles’ outback elder, Rachel House’s no-bullshit trucker) are few and far between and it’s great to see the undercurrent of political subtext continues to run alongside the horror.

Fry (11.22.63) is compelling as Eve; driven enough to make mistakes but smart enough to learn from them, and her growing strength and resolve make her a convincing match for her foe. Jarratt’s Mick is as scary and unpredictable as ever, and the series doesn’t fall into the trap of giving him too much screen time. The revelations about his past (taken from the two Wolf Creek prequel novels) come close to over-explaining him, but they don’t cross that line.

This is a gripping and chilling series that shows that Wolf Creek has always been cleverer and richer than it might seem, although strong stomachs are required.