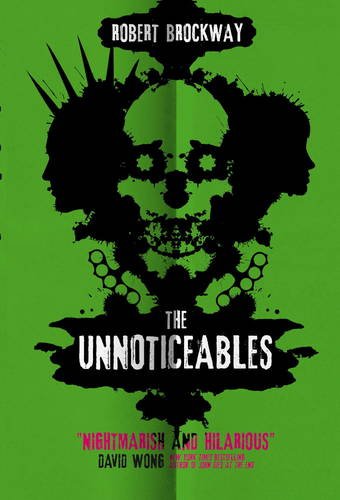 John Dies At The End by David Wong

Beer, body horror and horrifying tar men collide in The Unnoticeables, Robert Brockway’s raucous, highly entertaining slice of madness, which cuts between the New York punk scene in 1970s New York City and present day Hollywood and offers plenty of chills and a lot of laughs.

In NYC, broke boozehound punk Carey finds his happy-ish existence of drinking and listening to music interrupted by the appearance of strange, attention-deflecting monsters who keep disappearing his friends. In LA, underemployed stunt woman/waitress Kaitlyn loses her best friend at a party and is stalked by Marco Luis, a dead-eyed, perma-grinning predator who is also the soap star she was crushing on as a child. Are these beings angels, demons, monsters? Does it matter when they either want to melt you or turn you into an automaton?

Brockway keeps things moving at a brisk pace, throwing us into the deep end straight away with Carey, who witnesses the gruesome death of a friend at the hands of boiling tar men with gears for eyes in his opening chapter. Kaitlyn gets a little more development; reluctantly struggling to fit into the Hollywood scene without success before she’s assaulted by a childhood crush who clearly isn’t human.

There’s an enthusiastic quote from Brockway’s Cracked cohort and John Dies At The End author David Wong on the front cover, and it’s fair to say that they share a similar sense of humour. The horror veers from the ridiculous to the genuinely sinister. Carey launches himself into fights with his boot aimed squarely for his enemy’s crotch, so the New York sequences tend to be bigger on laughs, while Kaitlyn’s experiences with Marco are more in the skin-crawling vein.

Kaitlyn’s certainly no helpless victim, with a wry sense of humour and a no-bullshit attitude, although it does feel like her stunt woman skills are a little underused. That being said, she’s great company, as is Carey, and it’s wonderful when they finally meet up.

On the downside, it does feel as though the final chapters are rushed, as Brockway lifts the curtain on what’s actually going on and hurries on through. It is the first instalment in a trilogy, so presumably we can expect a little more in the way of exposition further down the line, but explanations aren’t what make The Unnoticeables such an entertaining read. It’s fast, funny and creepy, with two hugely likeable central characters. Roll on book two.