Bong Joon-Ho’s inventive and intense dystopia set on a high-speed train delivers one hell of a ride.

The second instalment in the adaptation of Veronica Roth’s Divergent trilogy of YA books delivers more train-jumping antics and teen angst, but it is also a tad underwhelming. This time, Robert Schwentke (RIPD) takes a seat in the director’s chair, but there’s little difference in style between each film.

We enter post-apocalyptic Chicago not long after the events of the first film, where the divergents are now considered a threat to the harmony of society. Jeanine (Kate Winslet) has started a fierce campaign against their kind after finding a special box that can only be unlocked by the strongest divergent. If you haven’t read the books by now, it doesn’t take a mastermind to figure out that Tris (Shailene Woodley) turns out to be the chosen one.

We meet Tris, Four (Theo James), Caleb (Ansel Elgort) and Peter (Miles Teller) hiding out in the peaceful commune of Amity, which is headed up by the kind but firm Johanna (Octavia Spencer). But it’s not long before the action kicks in, with the group having to make a quick getaway when Jeanine (Kate Winslet)’s Erudite and Dauntless henchmen appear with a new device that can identify a divergent. When the group encounter a rowdy rabble of factionless who look like they’ve stepped out of New Zealand TV series The Tribe, it is revealed that Four’s presumed-dead mother (Naomi Watts) is still alive and heading up an underground rebel army.

This instalment also takes the audience into the factions of Erudite and Candor, where we meet Jack Kang (Daniel Dae Kim). The design of each faction’s domain is eye-catching, but doesn’t make up for the convoluted plot. 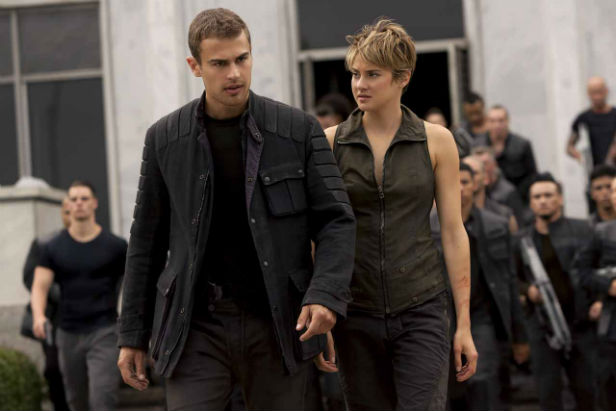 There’s little urgency behind much of the drama, with it all playing out in a predictable fashion. Tension is missing for the most part due to the fact that whenever anything perilous happens, someone conveniently pops their head through the door at the last minute to save the day. This happens so many times it becomes laughable. The exhaustive action sequences go through the motions, but there are some exhilarating and decently choreographed fight sequences. A scene towards the end which features a flaming, spinning house set-piece adds some much needed poignancy to Tris’ narrative.

Insurgent is at its strongest when focusing on Woodley’s internal battle against her demons. The extreme violence and upheaval she faced in the first film is taking its toll, and she is forced to come to terms with her grief and overwhelming guilt. Woodley’s physical performance is impressive. Whether she’s crashing through glass in SIM-built experiences, tangling through her nightmares or taking the next step in her romantic relationship with Four, she’s always credible.

Miles Teller adds wit and charm at the start of the film, but his story is regrettably pushed to the backburner, as is Caleb’s narrative. It’s a shame these characters aren’t more fleshed out, as Caleb’s decision to turn away from war could have provided a nice parallel to Tris’ determined path to aggressive action. Winslet and Watts sadly do little more than spew plot points and information, and the laboured dialogue continually speaks down to its audience, with many of the characters’ reactions feeling flat and passionless.

The middle film in a franchise always faces the difficulty of tying up its story satisfactorily, but that’s something Insurgent actually achieves. The real problem here lies with the underwritten supporting characters and overabundance of repetitive action sequences.