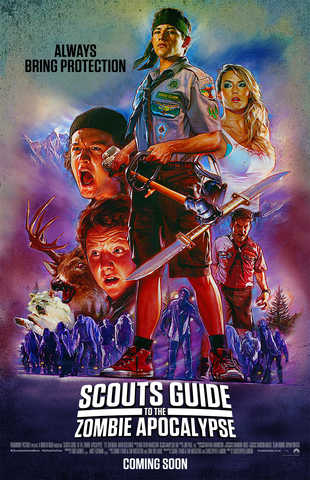 Jesse Eisenberg tries to survive a zombie apocalypse with help from Woody Harrelson.

Combining a gleeful mixture of crudity, gore and a pleasingly high gag rate, Christopher Landon’s hilarious horror comedy makes a welcome addition to the ever-expanding zomcom genre and is worthy of a place alongside the likes of Zombieland.

It opens with three scouting best buddies – level-headed Ben (Tye Sheridan), filthy-minded Carter (Logan Miller) and chubby, sweet-natured Augie (Joey Morgan) – preparing for their last camping trip with Scout Leader Rogers (David Koechner). Venturing into town on a supply run, they are shocked to discover that their small town is under attack from a horde of zombies.

Assisted by shotgun-toting waitress Denise (Sarah Dumont), the trio will have to use all their scouting knowledge in order to save their town from zombie-based destruction.

Displaying expert comic timing, the three leads put in perfectly pitched performances, while Dumont delivers a kick-ass turn that’s sure to earn her a legion of adolescent fans. There’s also strong support from Cloris Leachman as a crotchety pensioner who’s scary even before she becomes a zombie, though Koechner is sadly underused as the scout leader.

Happily, Landon gets the gags to gore ratio exactly right, balancing enjoyably schlocky effects with a non-stop barrage of great jokes and a handful of very funny set-pieces. Similarly, the script ensures that the laughs come from a variety of sources, ranging from character-based comedy to one-liners and crude physical gags, as well as bizarre, off-the-wall moments such as a zombie cat attack or a zombie sing-along to Britney Spears.

Admittedly, some of the bad taste material doesn’t quite come off (there’s a homage to Re-Animator that should probably have been cut), but there are enough belly laughs elsewhere to ensure that such lapses are swiftly forgiven.

In short, this is a hugely entertaining zom-com that’s likely to pick up a devoted cult following amongst genre fans, thanks to a winning combination of crudity, gore and laughs.