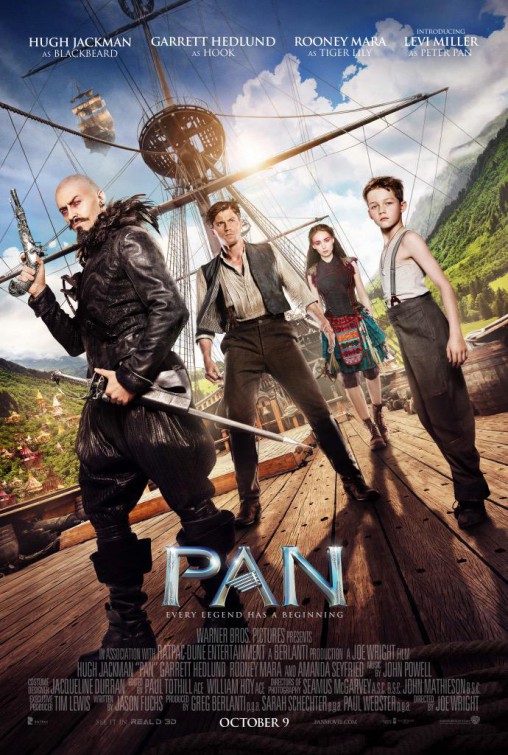 A magical adventure based on Gaiman’s novel, which sees a young man embark on a quest to find a fallen star.

This steampunk-style Peter Pan origin story, directed by Joe Wright and written by Jason Buchs, plays out like an old school Hollywood adventure with a dash of Les Misérables. For all its eye-catching design, however, Pan sorely lacks a much-needed sense of wonderment, and by focusing its efforts on the outlandish it forgets to be playful.

A group of orphaned boys from a blitzed World War II London are kidnapped and taken to a strange new world, where a chorus of men sing Nirvana’s iconic Smells Like Teen Spirit as if it was their national anthem. But as the boys continue to disappear into this gaudy land and further from reality, the momentum unfortunately dissipates too.

Confident newcomer Levi Miller approaches the character of Peter as if he has emerged from the pages of Oliver Twist. He’s a cocky Artful Dodger type who sneaks around the orphanage searching for hidden rations. He appears alongside a booming Hugh Jackman, who takes on the role of pirate Blackbeard – the man in charge of stealing young boys so they can mine pixie-dust for his anti-aging needs.

Garrett Hedlund is a wise-cracking young Hook who resembles Indiana Jones and takes Peter under his wing, while also flirting outrageously with Tiger Lily (Rooney Mara, seemingly dressed as Glastonbury music festival). Highlights include Kathy Burke having lots of fun as an evil nun with a serious grudge against Peter, and Adeel Akhtar (Utopia) as Smee, adding some comic relief with his clueless one-liners.

Pan rifles through too many literary and cinematic influences, borrowing from Terry Gilliam’s oeuvre, The Chronicles Of Narnia and The Buccaneer, but it never quite manages to thread these things together convincingly enough to entirely pull it off.

It instead arduously moves along from one shiny set piece to another, feeling overstuffed and occasionally looking hideous. There is one gloriously designed stop-motion sequence that recalls the work of the Quay brothers, but sadly magical moments like this are far too scarce.