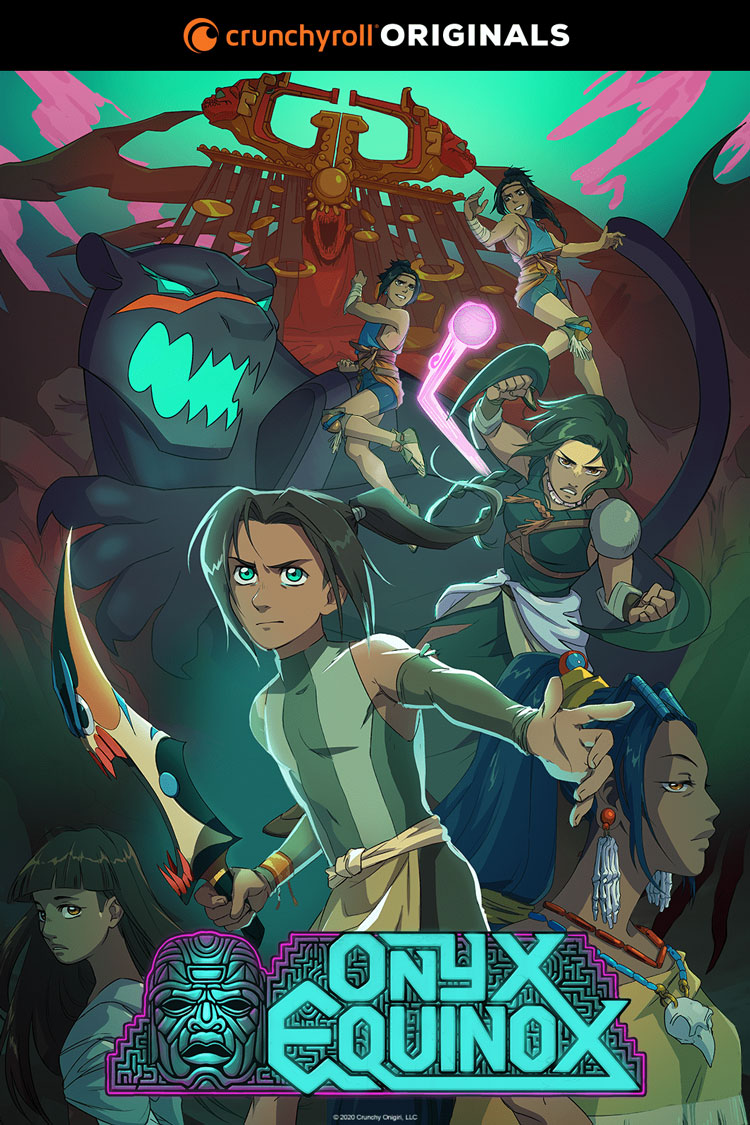 Onyx Equinox watches like an edgy Saturday morning cartoon and we mean that in a good way, because what’s not to like about that concept? Think back to your teenage self and you probably would have wanted nothing more than seeing proper violence, a little bit of swearing and maybe even some nudity in your favourite shows…

If that was you – and still is you on some level – then Onyx Equinox delivers and ticks all three of those boxes within the space of its first action-packed 24-minute episode. That it looks and feels like a Saturday morning show comes as no surprise when you learn that the animation studio tasked with bringing Sofia Alexander’s (whose animated credits including working as a storyboard artist on Infinity Train) Mesoamerican creation to life was Tiger Animation. The Korean studio’s portfolio is filled with animated shows such as Avatar: The Last Airbender and Ben 10, all the way back to 1998’s Spawn and Godzilla series, so no wonder watching Onyx Equinox as an adult feels like coming home.

Onyx Equinox follows Izel (Olivia J Brown) and he is, for want of a better word, a loser – he’s weak both physically and mentally, he lacks confidence and he spends most of the first episode crying. In short, he’s not Grade-A hero material, but that means he’s got the chance to grow and develop as a character, and him being the main character here is no accident. Episode one opens with an attack on a city by creatures from the underworld before big bad Mictlantecuhtli (Cástulo Guerra) himself, the Aztec god of death, appears and destroys the whole place, sending it and all of its inhabitants into the depths below, and stealing all of those lovely human blood sacrifices from the other gods. It turns out that they need blood to live and they’re not best pleased about this – they decide to close the five gates to the underworld, sealing it, and Mictlantecuhtli, off from the human realm using Olmec machines.

However, the twist is that they’re made from god-repellent obsidian and can only be operated by a human. Quetzalcoatl (Zeus Mendoza) volunteers to choose a human to close the gates and makes a wager with fellow god Tezcatlipoca (Arin Hanson) that he can get it done before the equinox – if not, Tezcatlipoca will destroy humanity and remake it (something the gods have already done four times previously). They wager their lives, with the winner receiving the other’s blood sacrifices and, to ensure no foul play on Quetzalcoatl’s part, the chosen one (“The lowest of the low” – our poor Izel) will be guided by Tezcatlipoca’s jaguar emissary, Yaotl (Alejandro Vargas-Lugo). Onyx Equinox wastes no time in getting down to business, cramming all that into the first ten minutes of the first episode, and while it’s a lot to take on board when you’re watching it, it certainly gets things started with a bang.

With blood sacrifices being such an integral part of the story it is no surprise that Onyx Equinox is positively drenched in the red stuff. It’s not shy with the old ultra-violence, either – throats are slashed, bones are broken and limbs are torn off. We weren’t joking about the swearing (Yaotl delivering a line in the first episode that made us laugh out loud) or the nudity, either. It may look and feel like a Saturday morning show, but it’s definitely grown up. Stylistically, Onyx Equinox delivers some downright awesome monsters and some very cool design elements that connect it to its Mesoamerican foundations (such as the square-edged smoke emanating from Tezcatlipoca’s nostrils) while the soundtrack is simply superb. Big, bold, suitably epic and with a distinct Central and South American feel, it suits the on-screen action and overall look and feel of the show perfectly. Honestly, it’s so good that it might just be our favourite thing about Onyx Equinox.

Our early impressions of Onyx Equinox are that it’s pretty good; there’s plenty of action, and we reckon it’s definitely got potential. However, it’s one of those shows that looks like you need to watch the entire series to get you truly on board as we were left intrigued, but not totally hooked. The voice cast has us excited, with Carolina Ravassa (Sombra from Overwatch) and Arin Hanson (internet legend Egoraptor) among the roster. Also, aside from The Emperor’s New Groove and – one for the real OGs out there – The Mysterious Cities Of Gold, there hasn’t really been much in the way of animation that features Mesoamerican culture and mythology, so it’s nice to see a show with a setting that’s going to be fresh and interesting for most viewers.

Ultimately, Onyx Equinox wears its (still-beating, bloody) heart on its sleeve – it’s a violent adult animated series that aims to entertain and, for the most part, succeeds. It taps into your edgy inner teenager, the one that wanted to watch grown-up films and hear rude words but still loved cartoons. If you’re able to tap into that side of yourself, you’ll have a good time on this bloody ride.

Onyx Equinix episode one is available now on Crunchyroll.