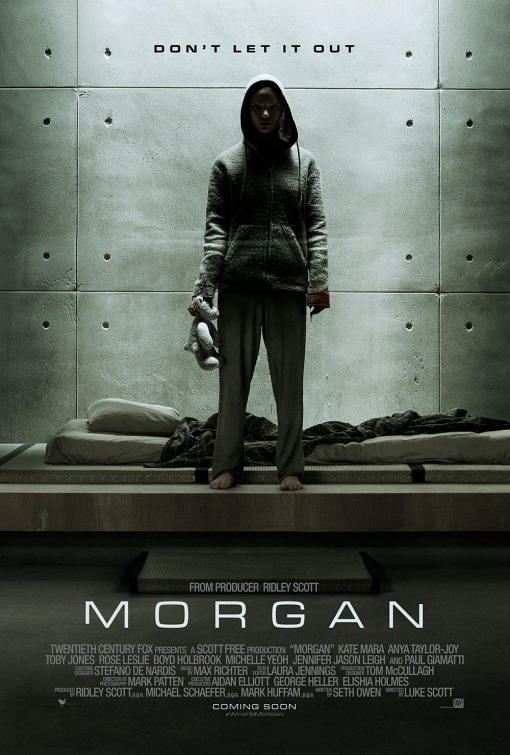 Things go slightly awry when a scientist decides to develop an AI in this gripping thriller.

The premise for Luke Scott’s directorial debut is intriguing, but perhaps not entirely new. Morgan (Anya Taylor-Joy) is a genetically engineered person who was created in a lab and raised in a controlled environment in the middle of the woods somewhere. When the film starts, she’s only five years old but appears to be in her late teens. She’s intelligent, inquisitive and very self-sufficient. She’s developed apparently healthy relationships with the scientists that made her, who she now considers friends.

But when Morgan gets upset and throws a tantrum, stabbing one of the scientists several times in the eye, corporate trouble-shooter Lee Weathers (Kate Mara) is called out to evaluate whether the attack was a one off or if the project should be terminated.

Mara is fascinating as the cold but professional Weathers. Her refusal to call Morgan ‘she’ (opting instead for ‘it’) and her stern approach to questioning the lab’s residents quickly make her the quasi-villain of the story, even though she’s just doing her job. Likewise, each of the sizable group of residents have actual personalities and lives, as opposed to just being more scientists spewing words we don’t understand.

But even with the suspiciously strong cast of distinguished character actors, Taylor-Joy is easily one of the film’s greatest assets. She somehow manages to remain sympathetic, even though the first time we see her she’s stabbing Jennifer Jason Leigh in the eye. It could be her childlike innocence after the event, or it could be because the rest of the characters, though interesting, aren’t that likeable.

Like all AI stories, Morgan is asking a question, but the question it’s asking isn’t quite clear. Can we trust artificial intelligence? Can artificial intelligence trust us? Should we start thanking Siri when we ask it to search the web just in case it wants to start a fight? The film asks question after question, but it doesn’t always provide the answers, or even explore the question enough to start forming opinions.

Extremity film review: a horror experience gets under the skin
< Previous
Next >