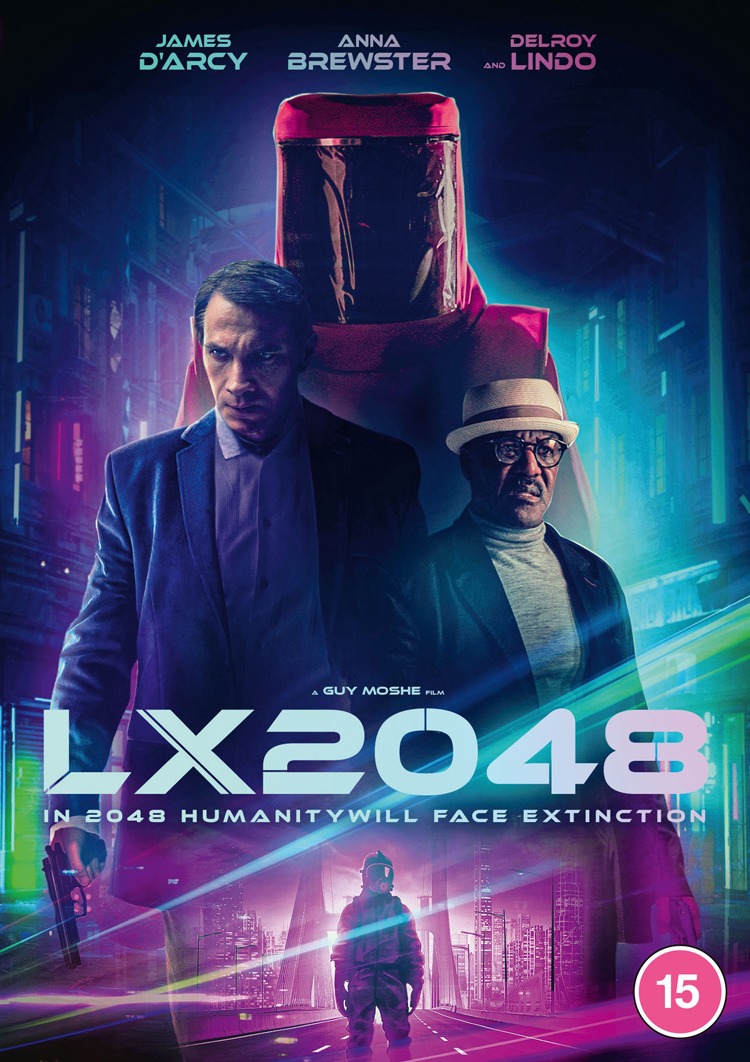 Set in the future, LX 2048’s world sees humanity adjusting from the devastation caused by the sun becoming toxic. People can only go outside if they wear protective gear, which means the vast majority of the population has switched their daily routines to waking up and going out at night. For all those other times, there’s the virtual world where you can do and be whoever you want. Who cares about real human connection when your avatar can do everything for you, be anyone for you? Not only that but the creation of human-like clones whose skin is unsusceptible to the sun’s burning rays means that work can still be done in the daytime by mindless (perhaps) worker clone drones.

This is the life that Adam Bird (James D’Arcy) has found himself in. Adam is no Average Joe – a broker for a tech company running those all-important VR systems, Adam is always being told that there are great things in store for him. However, now approaching mid-life and trapped in an unhappy marriage with three kids who have headsets constantly glued to their faces, those great things are getting further and further away. Craving a connection to the physical world, Adam refuses to converse with his family over VR and daily dons a thick hazmat suit to drive to his empty office via a convertible.

It’s clear Adam is going through the proverbial midlife crisis but what does that look like in a futuristic world where stepping outside literally burns the skin off your body? Well, in Adam’s case it’s an extramarital affair with the very thing he despises – a sexy young AI in the virtual world, complete with a lifesize sex doll interface  – and a desperate journey to prolong his life via the cloning system.

“To be, or not to be?” That is the question… that Adam’s soon asking himself as his crisis spirals out of control and he comes face-to-face with his clone, which has the audacity to be better than the original (at the request of his own wife no less).

If all this sounds a bit heavy for a sci-fi thriller about a toxic sun then you would be right. LX 2048 is much more than its (neverless brilliant) concept – it’s a deep dive into what it means to be human.

Writer and director Guy Moshe could have easily relied on his high-concept sci-fi theme and cool title to deliver plenty of night-time, neon-enthused futuristic thrills but instead takes the bold step to focus on this one man… and it’s all the better for it.

A realistic tale within a hyperrealistic setting, LX 2048 raises the question of how you really would react to being trapped inside without real human connections and right now, during a worldwide pandemic, that’s a question we’re afraid we might know the answer to.

Dazzler Media presents LX 2048 on Blu-ray, DVD & Digital Download 15 February 2021. Win a copy of the film with our competition here.