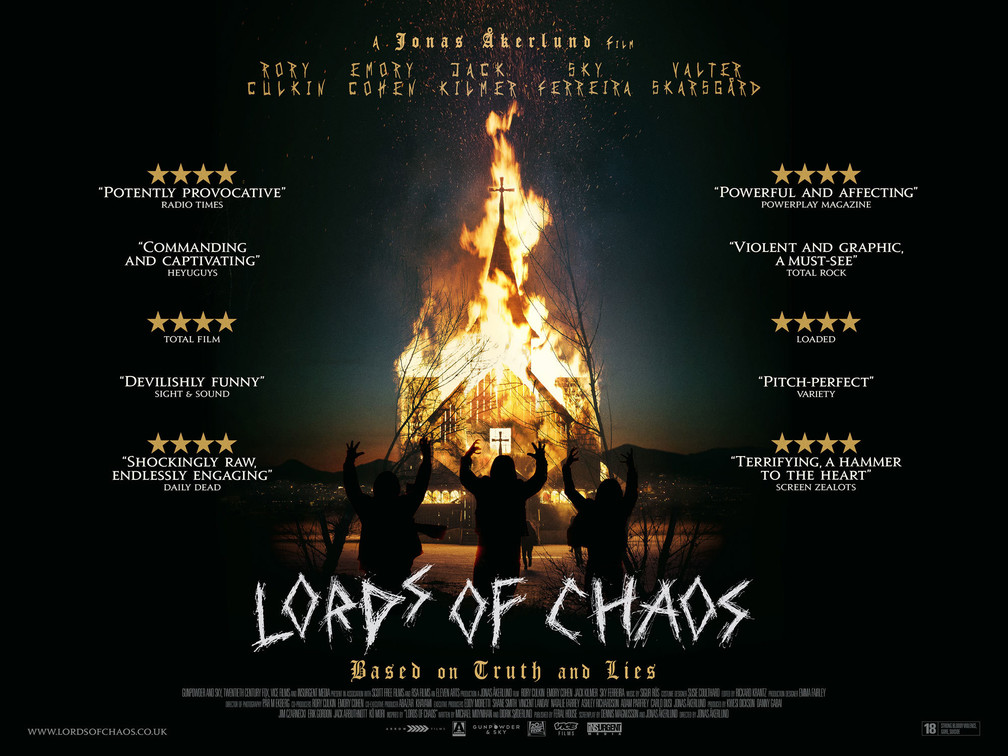 Swedish director Jonas Åkerlund comes well equipped with knowledge of the music industry from working with the likes of The Prodigy, Madonna, Lady Gaga and Rammstein. He was also the drummer in Swedish black metal band Bathory back in the early 1980s, just around the same time the infamous Euronymous began his quest to create a pure Norwegian black metal scene with his band Mayhem. It all ended in disaster and Åkerlund turns his life story into a bloody, eye-opening horror film about toxic masculinity. It earns its 18 certificate with stomach turning, explicit sequences of extreme violence while at the same time cannily satirising the scene through the band members’ exceptionally dumb and vicious exploits.

If you’re at all familiar with the real story you’ll know that the cover of Mayhem’s live album, Dawn Of The Black Hearts features a photograph of one of their members after he committed suicide by slitting his own throat and shooting himself in the head in 1991. It was taken by Euronymous and the film uses this image, not only in a graphic way, but as a way into his mindset. Rory Culkin takes on the lead role, and narrates the story as an observer to his own demise. At first this feels contrived but as the film progresses it takes on a way more powerful tone. As someone who had carved out a persona as a misanthrope, the film has a semblance of sympathy for a person who didn’t really know how to deal with his feelings when it came to the suicide of his best friend.

Emory Cohen who you may recognise as the sweet love interest from Brooklyn is not messing about with his transformation into Varg whose Nazi beliefs turn him into the monster of the film. Cohen is not only genuinely intimidating at times with his towering stance but also manages to comically convey true stupidity with a villainous turn. Following their story from the start through to the bitter end Åkerlund never glamourises their actions instead choosing to call out how needlessly destructive it all was.