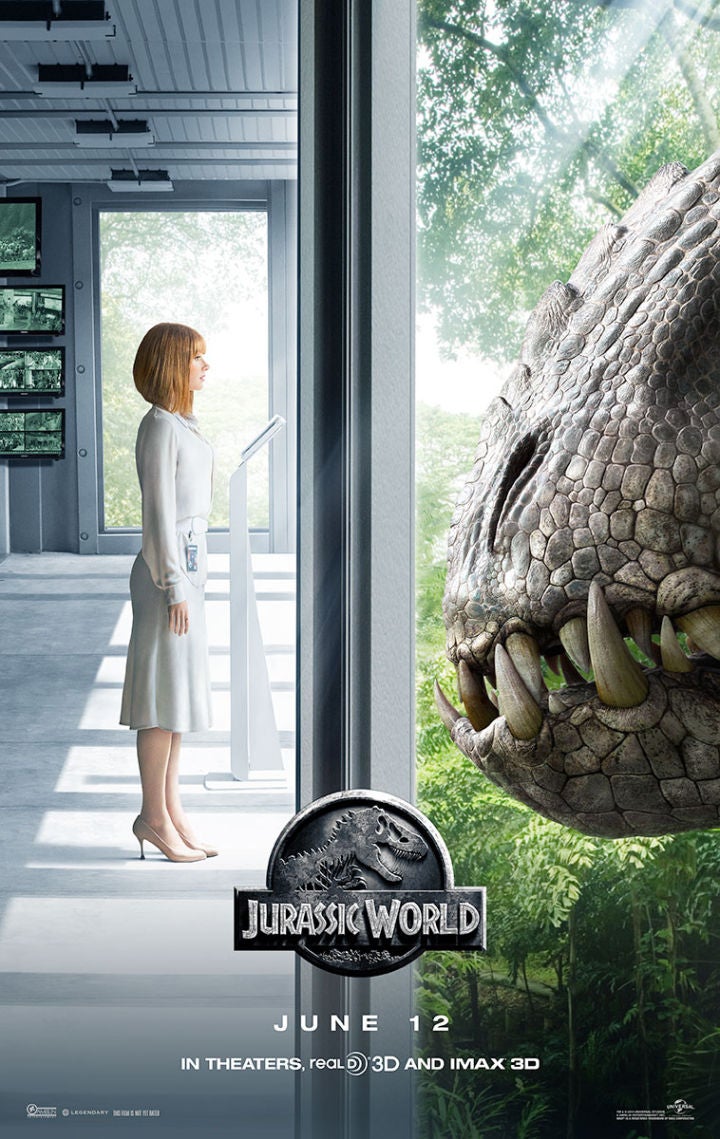 There are several points during Jurassic World at which bad-ass raptor trainer Owen Grady (Chris Pratt) bemoans the park’s meddling with the classic formula and their attempts to up the wow factor.

Tech guy Lowery (Jake Johnson) wears an original Jurassic Park t-shirt and enthuses about how much cooler the old facility was. Director Colin Trevorrow and his writers know you love the original movie, and they want you to know that they do too.

It’s hard not to get on board with their enthusiasm. As soon as that classic theme starts up, we’re giddily transported back to the first time we watched Steven Spielberg’s classic.

But even though Jurassic World seems to be a bit apologetic and wittily self-aware about the fact that it has to deliver new, bigger shocks and set pieces, it does have to deliver.

So, Jurassic Park is now Jurassic World, a fully functioning resort park with a John Hammond statue, Sea World-style feeding time at the Mosasaurus tank, and kids can ride the baby Triceratops. Even the Velociraptors are nearly trained thanks to Owen.

But corporate want a bigger, meaner, cooler attraction, which is why they’ve created a new dinosaur: the Indominus Rex. Naturally, they’ve created something they can’t handle, and it’s soon cutting a bloody swathe through the park towards the thousands of visitors.

Trevorrow reintroduces us to this world through the eyes of excitable young dino fan Gray Mitchell (Ty Simpkins) and his over-it older brother Zach (Nick Robinson) are heading to the park to see their aunt; park operations manager Claire (Bryce Dallas Howard). Like Gray, we’re not that interested in the park itself (now fully corporate with buildings sponsored by Samsung); we want to see the dinosaurs.

Indeed, the characters aren’t the main attraction, and they’re not written as such. Owen is a hybrid of all of your favourite JP characters, sceptical about changes, committed to his dinosaurs, and an all-round ultimate badass. Zach and Gray have some great moments in the action sequences, but their emotional moments are painfully clunky.

Most depressing of all is Bryce Dallas Howard’s character, who is repeatedly scolded by Owen into bucking her ideas up, taking her high heels off and becoming a better person. She even learns to like kids. So it’s just as well the film delivers on its set pieces. The Indominus Rex is certainly a scary creation, Trevorrow delivers an excellent callback to the rear-view mirror moment of the original and the film’s gore moments are surprisingly visceral (one protracted death is particularly nasty). However, for all the IR’s big moments, the raptors steal the show once again, even as the film constructs one of its daftest subplots around them.

The love for the classic dinosaurs proves to be one of the film’s biggest redeeming features. Owen and Claire’s discovery of a dying brontosaurus is moving, and there are the trademark ecological concerns of screenwriters Rick Jaffa and Amanda Silver are personified by the obnoxious Hoskins (a gleefully hammy Vincent D’Onofrio), who doesn’t understand the animals and can only think of their military application.

Jurassic World is not a perfect creation. There are pacing issues, as urgency seems to come and go, the film’s treatment of Claire is lazy and problematic, and it’s very, very silly. That being said, it’s frequently thrilling, it’s well cast, and Trevorrow’s clear love of the original creates a powerful blend of nostalgia and glee.

Fittingly, it’s a theme park ride itself: bumpy, and at times worryingly poorly maintained, but you’ll laugh and scream.