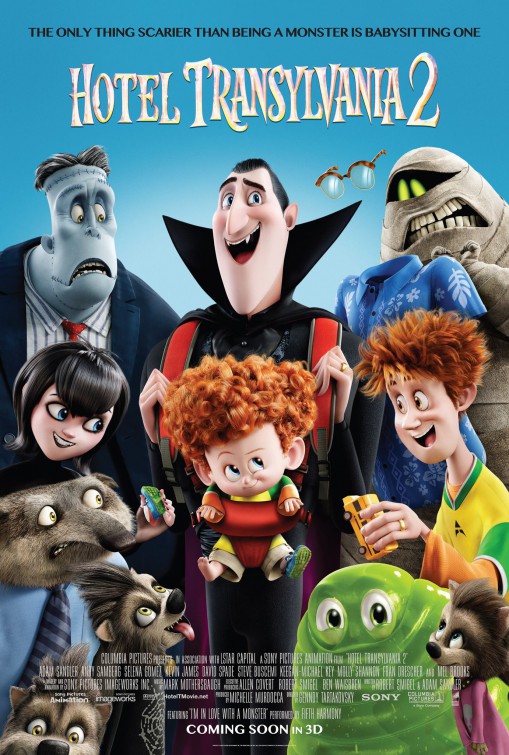 Dark fantasy in which a girl discovers an alternate world where everyone has black buttons for eyes.

2012’s animated monster comedy Hotel Transylvania was a comfortable hit for Sony, taking just short of $150 million and guaranteeing a spooky sequel. Happily, the majority of the creative team are back on board for this entertaining and frequently funny follow-up, though it doesn’t quite hit the comic heights of the first movie.

With cult animator Genndy Tartakovsky (Star Wars: Clone Wars) once again at the helm, Hotel Transylvania 2 begins with Dracula (Adam Sandler) throwing a lavish wedding for his vampire daughter Mavis (Selena Gomez) and her human husband Jonathan (Andy Samberg), which is followed, a year later, by the birth of their adorable ginger son, Dennis (Asher Blinkoff).

With Dennis having until his fifth birthday to exhibit vampire tendencies, Dracula is understandably concerned when the deadline approaches and the boy has yet to pop a fang, so he recruits his friends – including Frankenstein (Kevin James) and Wayne the Wolf Man (Steve Buscemi) – to help bring out the monster in his grandson before it’s too late. However, nothing goes according to plan, so he turns to his scary dad, Vlad (Mel Brooks) for help.

The superb voice cast are all on top form and the animation is lively and fast-paced throughout, with a multitude of very funny cutaway gags. In addition, Tartakovsky packs every frame with a huge amount of detail, cannily ensuring that the film will reward a rewatch on DVD.

The witty script zips between verbal and visual jokes and has a lot of fun with old horror movie references, while delivering an effective, albeit slightly heavy-handed message about tolerance.

However, a few flaws have crept in that were absent in the first film, such as an irritating amount of product placement (mostly Dracula struggling to use a smartphone) and Sandler putting more of his standard screen persona into his performance than he did last time round.

Ultimately, this is an enjoyable sequel that succeeds thanks to a high gag rate, colourful animation and a strong comic cast.