A young girl adopts a puppy, not realising that he’s actually a mischievous genetically engineered alien.

When a well-meaning race of creatures called the Boov discover Earth, they think their troubles are over. The pint-sized invaders take over the planet, relocate its seemingly primitive population, and revel in their new home.

Their latest home, that is. The Boov have been pursued across the galaxy by their enemy, the Gorg. This menacing foe has a grudge against the tiny tentacled trespassers, as well as a habit of blowing up their latest safe haven.

Parsons plays the upbeat Oh. Named for the less-than-enthusiastic sound his fellow Boov make whenever he’s around, Oh is cheerfully lonely. Desperate to make friends in a society that doesn’t value such connections, he tries his best, but no one wants to be his friend. 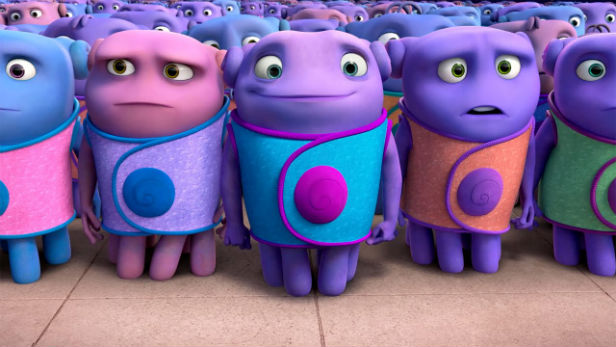 Because of his latest snafu, Oh inadvertently reveals his people’s location to the Gorg, and becomes Boovian Enemy Number One. While on the run he crosses paths with the little girl, upgrades her car to a flying machine powered by slushies, and agrees to help find her mother. As they travel the world together, Oh learns from his human companion what it is to belong to a family, and the guarded Tip discovers that the Boov aren’t all that bad.

Adapted from Adam Rex’s story The True Meaning Of Smekday, Home dials down the book’s social commentary while upping the ‘true meaning of friendship’ schtick. It’s a sweet enough story that plunders the child-meets-adorable-alien playbook, but lacks the personality that made the likes of Despicable Me and ParaNorman entertaining and heartfelt. You can’t help but think that Gru’s minions had an awful lot to do with the Boov.

That’s not to say that the world director Tim Johnson has created is without charm. The Boov are designed to be otherworldly yet endearing, with their stubby tentacle-feet and goofy grins. They change colour with their emotions, and that constant shifting adds a novel energy to them.

As for the cast, it’s remarkable that no one thought to use Jim Parson’s considerable vocal talents before now. As many Sheldon Cooper fans would have already guessed, he makes a rather convincing alien.

The actor affects a more eager version of his own voice, as well as Oh’s strange Boovian syntax. “I has found our car,” exclaims the purple critter. Lines like “Can I come into the out now?” are lifted from the source material, but when divorced from the novel’s darker subtext, they do feel a little childish.

Steve Martin’s turn as the beautifully smug Captain Smek is a scene-stealer for obvious reasons, while Rihanna’s raspy voice stretches the limits of her believability as a teen, but she brings warmth and humour to her character.

The bond between the Tip and Oh is the heart of the film, even if it seems to measure their friendship in selfies. Home doesn’t sparkle enough to make the transition from kids film to modern classic.

To be fair, not every animated film can evoke Toy Story 3 furnace scene levels of poignancy – there’s only so much the heart can take. That said, Home is possibly the most cheerful alien-invasion-of-Earth film you’re likely to see.