Not quite in the same league as Game Of Thrones, but has just as many surprises up its sleeve to keep the audience guessing.

After the Red Wedding of Season Three, some people might have questioned whether the series could maintain the same level of drama, plot twists, Machiavellian scheming and moments of outright sucker-gut-pounding shock that characterised it. If they did, then they were underestimating the team behind Game Of Thrones.

While the start of Season Four sees the War of the Five Kings appearing to be drawing to a close, the same clearly cannot be said for the show itself, which continues to throw effortlessly scene-stealing characters like Prince Oberyn Martell (Pedro Pascal) – aptly nicknamed the ‘Red Viper’ – into the mix. Bouncing effortlessly off the likes of the wry Tyrion (Peter Dinklage), measured Cersei (Lena Headey), taciturn Tywin (Charles Dance) and the coy Varys (Conleth Hill), he represents one of Game Of Thrones’ many strengths. Most shows have a few well-defined characters; this has an entire cast full of them.

In a sense, however, this has seen Game Of Thrones become a victim of its own success. With so many disparate locations and characters to at the very least pay lip service to, for some their screen time has been squashed. Location-wise, this season alone we have the events at King’s Landing; Daenerys (Emilia Clarke) attempting to rule Meereen; Arya (Maisie Williams) on the run with the Hound (Rory McCann); Sansa (Sophie Turner) in the Eyrie with her crazy aunt Lysa (Kate Dickie) and opportunistic ‘protector’ Petyr ‘Littlefinger’ Baelish (Aiden Gillen); Jon Snow (Kit Harington) on the wall; Mance Rayder (Ciaran Hinds) approaching the Wall with his hordes; Bran (Isaac Hempstead-Wright) moving further north; the broken Theon (Alfie Allen) prisoner of the twisted Ramsay Snow (Iwan Rheon) and lastly Stannis (Stephen Dillane), plotting his comeback.

It’s a big crowd, and one that has hindered the show in the past, but this time around it does a much better job of managing its many narratives, knowing exactly when to switch between locations (See episode ‘The Mountain And The Viper’ as a perfect example of this being done well) and when to stand still (the Neil Marshall-directed ‘The Watchers On The Wall’ deftly matches Season Two’s ‘Blackwater’ for bloodshed and battle-borne suspense).

Yet it’s finale ‘The Children’ that proves to be the show’s most shocking episode, seeing the deaths of three major characters (including one who hasn’t even been killed in the books yet, thus further emphasising the show’s growing detachment from its source material) and another committing actions that will change the way you look at him forever. With a number of characters passing on or trading places, in a sense this season represents a passing of the guard for Game Of Thrones, drawing a line under previous events while laying the ground for new ones to take place. 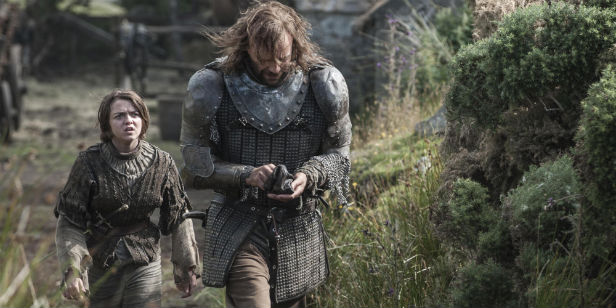 Season Four has arguably Game Of Thrones’ strongest material to work with since its debut, but like any other show we have our quibbles, with the odd episode like ‘The Laws Of Gods And Men’ not quite reaching the same genre-topping level as others. The season’s biggest stumble, however, was the horribly misjudged moment in ‘The First Of His Name’ when Jaime forces himself on Cersei. The people behind the show claimed that it wasn’t intended to come across as such, but nonetheless it represents a rare blip on an otherwise near-faultless season.

With the likes of Breaking Bad and Boardwalk Empire at an end and Mad Men drawing to a close, there’s little standing between Game Of Thrones’ deserved status as the best show on television. If you’re not watching it, then what are you doing, really? Because you are certainly missing out on this modern classic.