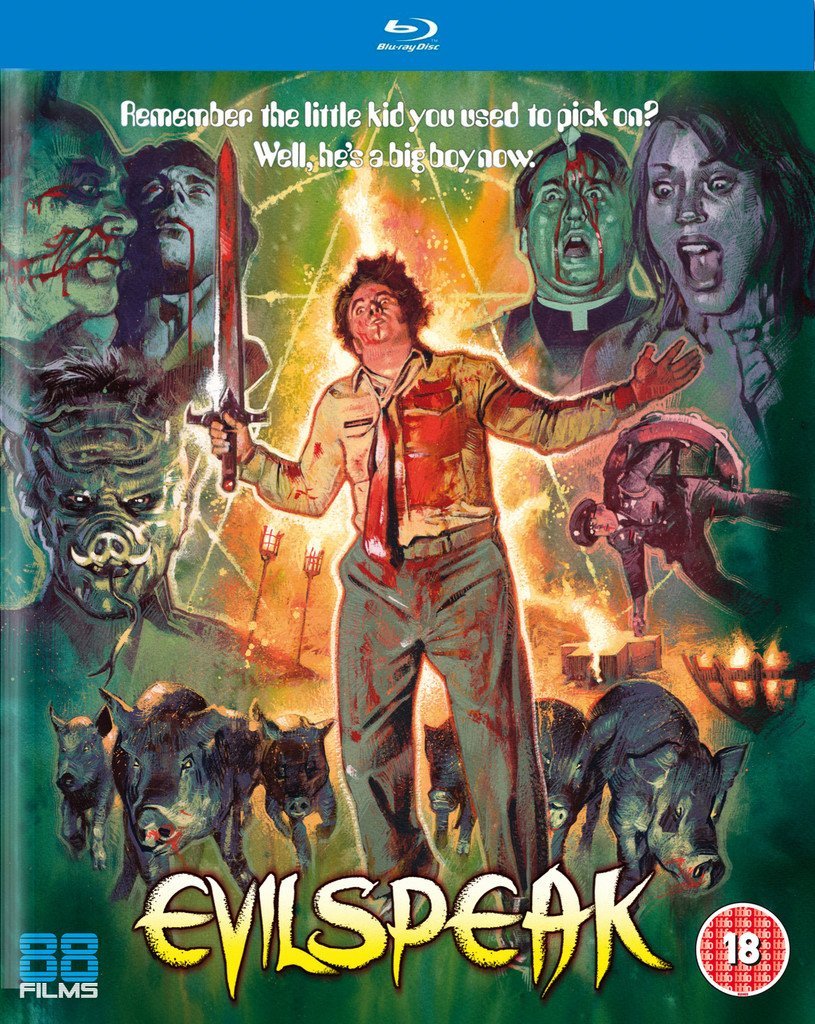 Would make a great double bill. Indeed, Coopersmith and Carrie should take on the world…

So-called ‘video nasties’ inevitably come with a weight of expectation for them to be shocking, schlocky pieces of celluloid. The last thing you anticipate is for them to actually be quite good, as is the case here with Evilspeak.

Having been one of the victims of the 1984 Video Recordings Act, mainly due to the excess gore (which isn’t really that bad by today’s standards, aside from one instance of a young woman being eaten alive by a horde of rabid pigs in a shower) and the heavily satanic themes, it’s nice to see the film in its fully restored and uncut form. Those expecting to be shocked, however, almost certainly won’t be – especially if you’ve seen Brian DePalma’s take on Stephen King’s Carrie, which this shares a lot of similarities with.

Indeed, the only real differences are superficial: the lead is gender-swapped, here being the orphaned, awkward, bullied and generally shat-upon military school pupil Stanley Coopersmith (Clint Howard), who stumbles across a book authored by a Dark-Age satanic leader. As he translates the book’s messages, evil starts to take root, and Coopersmith seizes the opportunity for revenge on his sadistic, bullying classmates and uncaring teachers.

Evilspeak is as on the nose as it’s possible to get with its premonitions and symbolism. The frequently flashing computer screen might as well have ‘Something is not right here’ written all over it, and right from the very first moment the horde of pigs waddle onto the screen (incidentally, why would you need them in a military school?), you know something horrible will end up happening. Coupled with its scathing portrayal of Christianity, and it becomes clear that it is a film with something to say, and isn’t afraid of saying it.

The inevitably bloody climax is signposted from the off – although with the absence of even one sympathetic character in the melee (Coopersmith’s sole friend is absent here), there’s no real tension – you’re just waiting for his tormentors to be picked off in deservedly horrible ways.

So Evilspeak doesn’t exactly reinvent the wheel, but it isn’t attempting to; it’s simply a fun throwback to a bygone age of horror filmmaking, and one you should definitely pick up.