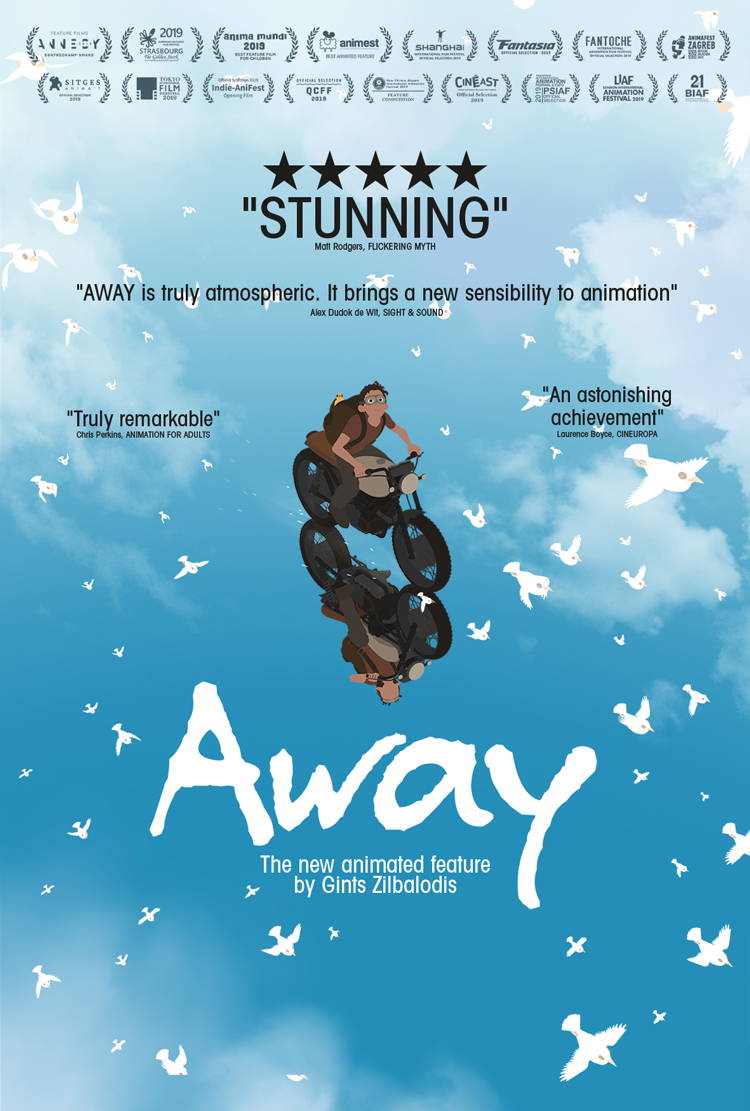 It’s hard not to compare yourself to others when counting your achievements in life – unhealthy as that may be – and it’s impossible not to do so after watching Away. This animated feature film has been lovingly crafted solely by Latvian film-maker Gints Zilbalodis and when we say solely we really mean that.

The 27-year-old already has seven short films under his belt, with Gints using hand-drawn animation, 3D animation and live-action across his works, and for Away he took on the roles of director, writer, producer, animator and film score creator. He spent three years working on the film, doing everything from bringing its animated world to life to composing and recording the music. Not only is this an incredible achievement that makes us feel deeply inadequate, but he’s created something truly special.

Away is a wordless film about a nameless protagonist escaping from a relentless, faceless creature and that’s really all you need to know because this film is best experienced with no prior knowledge of what awaits you. Chapter titles on the screen give some context as to what’s happening, but with no dialogue for guidance or exposition, immersive world-building through the movie’s visuals is essential and this is something Away is very good at.

There’s a real sense of wonder here that’s magnificently emphasised by the stirring soundtrack, and the way we explore the film’s strange land with our protagonist makes it feel like we’re right there with him trying to make sense of everything. Away is filled with magical fantasy landscapes that make you feel small and fill you with awe. It takes the time to show you moments of stillness and silence and there’s real beauty within these stunning sequences.

Away isn’t a perfect film but finding anything to criticise feels like an incredibly mean-spirited thing to do – the animation, for example, is simple and the art style is basic but you can forgive it for any shortcomings when you remember that it was all done by one person, and it has an endearing charm all of its own that adds a lot of character to the film. Away really is so much more than the sum of its parts and it tells a bigger story in its scant 75 minutes than many other films manage with a lot more time to play with and it feels like a real adventure on a bigger scale than you could ever imagine.

All that being said, Away won’t be for everyone. It’s a strange, surreal tale; one that doesn’t take you by the hand or give you anything to go on whatsoever. So how deeply you want to read into it all is down to you and whatever conclusions you draw from it are entirely your own. However, that’s just another part of its multifaceted appeal and this is a film that will linger long after the last scene has faded to black.

If you love animation and appreciate cinema, Away is a piece of filmmaking that truly deserves your attention. So find the time in your busy life to allow yourself just one hour and 15 minutes to sit back and enjoy this fantastic voyage, you won’t regret it.

Away is available to pre-order now from Apple TV and iTunes. It can be purchased from Sky Store, Amazon, Google, Microsoft,  Rakuten, Sony and Curzon Home Cinema from 18 January.