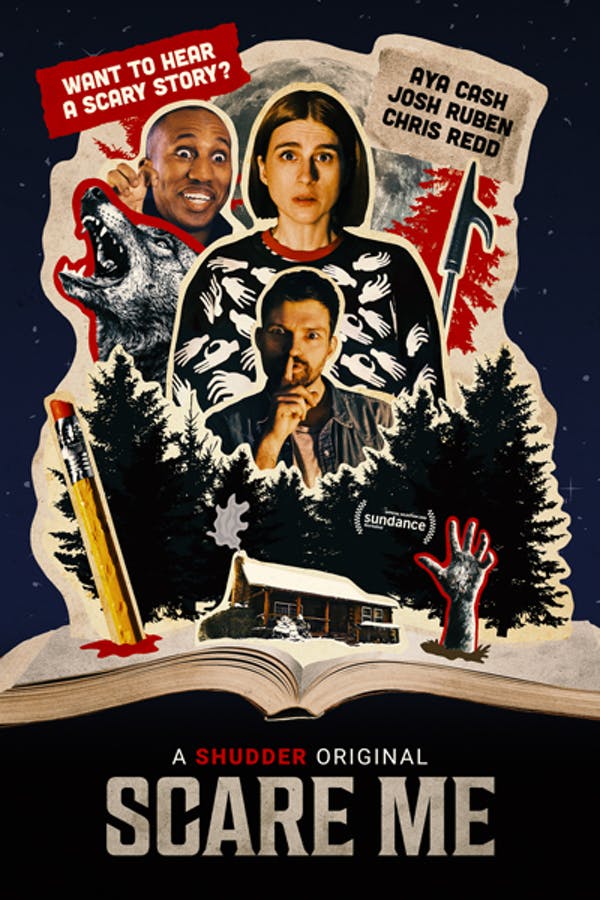 In Scare Me, the latest horror to land on streaming service, Shudder, a self-proclaimed, struggling horror writer leaves the big city behind him to rent a remote cabin in a desperate cliche attempt to get his creative juices flowing.

Unfortunately, when the power goes out in the middle of a storm, an inevitable terrifying knock at the window heralds the arrival of his worst fear… another writer. Only this one’s good… like really good… like best-selling horror author good! And to add insult to patriarchal injury, she’s a woman!

After inviting herself in, Fanny (Aya Cash) wastes no time in unsubtly challenging Fred’s (Josh Ruben) credentials as a writer and suggests that the best way to help flesh out his story is to act it out. As the master and apprentice take it in turns to tell their scary stories in the dark, the intensity and theatricality of their acting increases, and the lines between fiction and reality slowly blur when the characters’ true motivations start to show.

The two-hander evolves with the introduction of Chris Redd’s third wheel, Carlo – delivering both pizzas and some obligatory drug-fuelled stoner comedy skits, as well as cultivating an interesting dynamic for the group.

Creative and subversive decisions in this entertaining debut feature from writer, director and star Josh Ruben, add a touch of style and engagement to an idea that should only be able to sustain a five-minute sketch. When spread over 90 minutes Scare Me just about manages to hold itself together. Despite some bagginess in the middle, each of the stories in this anthology-style horror are well-executed, providing creeps and laughs in near enough equal measure.

Aya Cash’s performance as Fanny is the real stand out here, perpetually shifting from malevolent to charming, echoing some of the unsettlingly delightful turns she delivered so uncomfortably well as Stormfront in Amazon’s recent Season Two of The Boys.

Despite looking on the surface like a slightly obvious parody piece, Ruben confidently uses tropes to his advantage, short-cutting exposition in a way that might appear as lazy in other films but works with a rapid efficiency to bring the audience what they really want: improv!

No wait that’s not right is it?

Happily, Scare Me doesn’t forget it’s a horror and the film’s twist is not so much shocking as it is unsettling. Leaving the audience unnerved and questioning the preceding events to see if they can spot when the twist started and where it ended. Or did it start again when they were too busy laughing and mocking an irreverent comedy horror?

Feeling a little like a writers’ room’s idea of a writers’ room, Scare Me embodies a mixture of 30 Rock and Cabin In The Woods, and though it is a long way from being either, that doesn’t stop it being fun.

Scare Me is available on Shudder now.

The Vast Of Night review: This is the dimension of imagination
< Previous
Next >