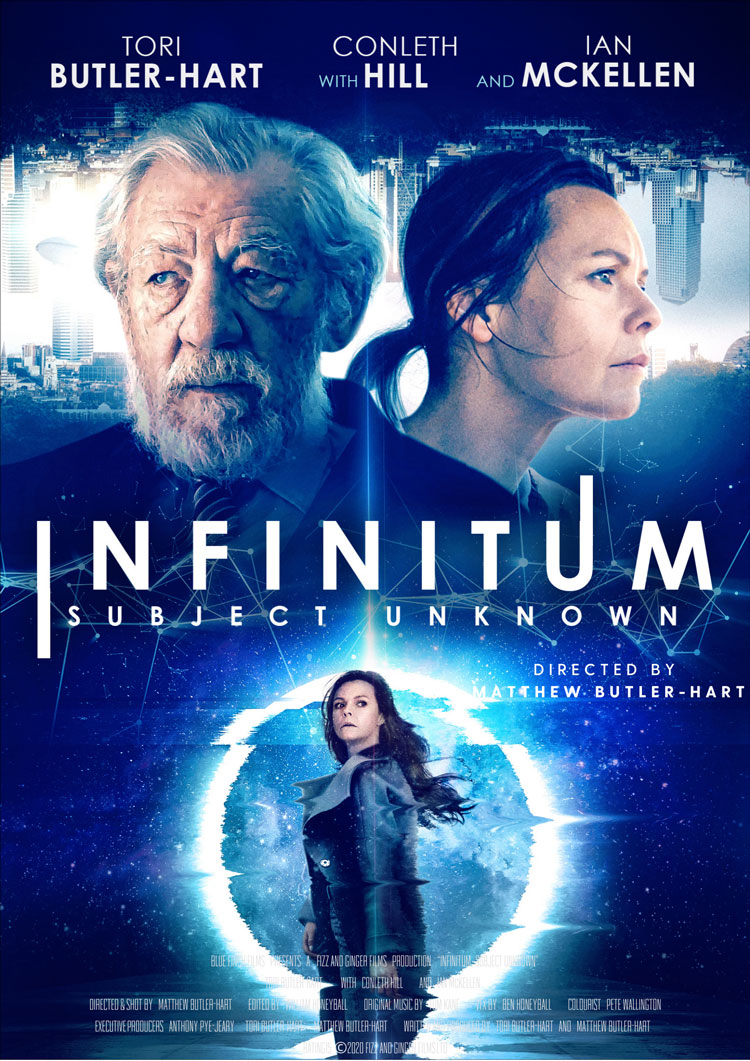 Poor Jane (Tori Butler-Hart). Not only does she wake up, gagged and tied to a chair in a strange attic of a seemingly normal London suburban house in new sci-fi thriller Infinitum: Subject Unknown, but when she does manage to wriggle free, discover a secret door in said attic, searches the abandoned house for tools to help set her free, manages to start the old car that’s parked in the driveway she’s… sent all the way back to the attic again.

That’s because Jane is stuck in a time loop and every time she’s ‘re-set’ she remembers little of the time loop that’s happened before; resulting in a frustrating series of familiar events as she slowly escapes her eternal cycle of house-bound torture.

Eventually, Jane begins to master the time loop game, understanding the rules of her strange world of one and unravels most (not all) of the mysteries that surround her, which involves a Professor Aaron Ostergaard (Conleth Hill, Game Of Thrones), a Dr. Charles Marland-White (Ian McKellen, The Hobbit: The Battle Of The Five Armies) and a research centre in the countryside that she inexplicably keeps remembering…

Directed by Matthew Butler-Hart, Infinitum: Subject Unknown (co-written by both Tori and Matthew) was created entirely during the UK’s first lockdown on an iPhone and given those situations, the film is impressive – effectively portraying what can be achieved with ingenuity, great VFX (from Ben Honeyball) and a house owner who doesn’t mind you piling up their belongings in strange places to add creepiness to a suburban semi.

One element of those innovative nuggets of creativity is the simple story clues scattered throughout the various loops – a photograph depicting a recognisable image, a bloodstain that wasn’t there before… it feels like a giant virtual escape room, offering a multiverse of infinite delights that will capture audiences’ attention, despite the movie’s small scale.

That attention is maintained by Tori’s depiction of Jane. Though she’s effectively starring in a film of one, playing against herself via split-screen (both Hill and McKellen are separate talking heads), she shoulders that responsibility incredibly well. Little dialogue, a small set and a lack of co-stars mean she has to put across Jane’s desperate intensity and complex story through simple facial expressions and mannerisms, which she does expertly, ensuring you don’t even feel a need for anyone else to be in it, telling a deeply personal story of frustration and confusion.

Speaking of frustration and confusion, Infinitum: Subject Unknown can, at times, cause the viewer to feel both. The constant time loops (especially in the first half, which is told entirely in the one house and at times, the one-room) can feel frustrating and a little repetitive. However, when Jane discovers the research centre, the time loops become more diverse and interesting. Though it’s also at the research centre that the confusion really does start to set root and many plot points are never fully explained. On the other hand, Infinitum: Subject Unknown is part of a wider universe and a TV series and graphic novel are both in development, which could eventually reveal all.

During a period of time that does seem like it’s on an infinite loop, Infinitum: Subject Unknown, is aptly fitting during the Covid epidemic and is a spark of positive creativity that’s emerged from a terrible and isolating situation. The shots of a deserted London in the film will remind plenty of viewers of the stark, disconnected atmosphere of March 2020 but will also offer a reminder of what is possible even during a seemingly hopeless situation (much like Jane finds herself in). A curious little film that will surprise you with its big ideas, an intricate, expertly woven story and a captive central performance, Infinitum: Subject Unknown is a delightfully twisty time-loop tale.

Infinitum: Subject Unknown is out now on VOD.